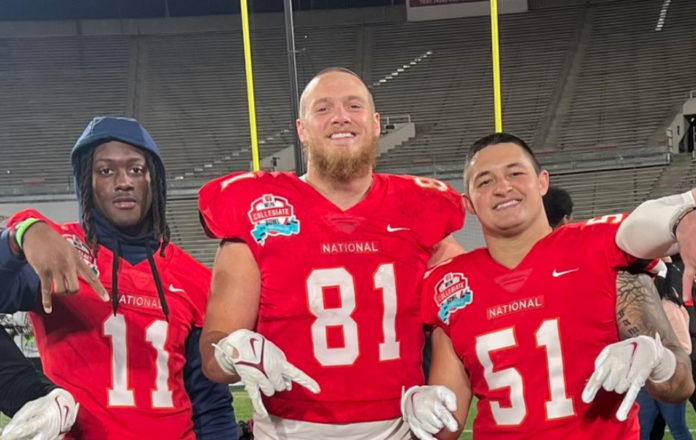 In late April 2021, Mike Woods left the Arkansas football brotherhood of which he’d been a member for three seasons to head for presumed greener pastures in Norman, Oklahoma. Nine months later, Woods publicly announced he was more than ready to be part of the Razorbacks family once again.

That played out this past weekend, when Woods joined four other former Hogs in the NFLPA Collegiate Bowl, a senior all-star game in the Los Angeles area. While he and Tre Williams played but didn’t record stats, Grant Morgan tallied four tackles and Blake Kern caught a 47-yard touchdown pass from Cole Kelley, who transferred to Southeastern Louisiana after the 2018 season.

Kelley ended up as the game’s MVP, putting the bow on a college career that saw him put up monstrous numbers at his small-time school: 7,112 yards and 59 passing touchdowns, 12 interceptions, along with 31 other touchdowns rushing and receiving.

After the game, the former Razorbacks got together for a photo shoot. The result was a bunch or horns downs (something Razorbacks and Sooners can get behind) and a “Hog Fraternity” message from Woods:

This is actually one of at least three recent Tweets where Woods shows love to the same Arkansas football program he left. He also retweeted a congratulatory Tweet about the Razorbacks’ success and sent out encouragement to new Hogs wide receiver Jadon Haselwood (and former Sooners teammate of Woods’) to “make history in Fayetteville.”

On the surface, it seems Woods wants to have his cake and eat it too when claiming status in a fraternity he openly left after the spring game last year.

Predictably, some Razorback fans online called him a traitor and a snake.

At this point, however, a lot of the animosity that Woods received in the wake of his decision has died down. While a few fans may still be irked when he claims Razorback status, Mike Woods is simply following through on his Tweeted promise of #WPS forever as he walked out the exit door last April.

Woods isn’t the first transfer player to try to stay in the good graces of the program he left, nor will he be the last. It just feels weird because doing this is so unlike the professional ranks, which college is increasingly mimicking on so many other levels. In the pros, when a player does the equivalent of choosing to transfer (i.e. forces a trade), then you never hear that pro athlete still try to claim membership of the team he just left.

There’s an understanding that door has been slammed shut. But that same dynamic hasn’t yet played out in college, and perhaps it never will given how attached some players become to places when they are 18 and 19 years old. In this way, Woods’ insistence of remaining a Razorback is sign that part of the spirit of amateurism still lives on, even in the midst of increasing transfer portal madness.

The other silver lining in the Mike Woods story is that it shows leaving Arkansas for bigger-name programs isn’t necessarily the best route. Woods, for instance, put up inferior stats in his one year in Oklahoma than he had during his last two seasons at Arkansas.

For decades, Oklahoma had been seen as more of a destination program than Arkansas, but that dynamic is shifting. The Razorbacks are closing the gap on the Sooners’ national prestige, to the point where Oklahoma’s No. 1 recruit Luke Hasz committed to Arkansas and Jadon Haselwood, Oklahoma’s leading receiver in 2021, transferred to Arkansas.

Coming off a 9-win season with a Top 5 recruiting class in 2023, Arkansas is trending up so much that some national analysts believe the Razorbacks have the foundation to contend for national titles in coming years.

A lot of fans nationwide tend to think about where Arkansas has been in the last 10 years versus where they heading. “Some people are prisoners of long-held perception,” as 247Sports college football analyst Josh Pate explains it. “This happened with Clemson for a long time. You had the term ‘Clemsoning’ and you had this idea in your mind that there is a certain batch of ingredients that you have to have from a branding and program perspective for me to consider you a playoff team, and Clemson’s not that.”

In a recent episode of his show, Pate then lays out what Arkansas needs to do to make the College Football Playoffs. “They would have to recruit at a certain level. I think they’re doing that right now. And especially this next cycle, the 2023 cycle, they rank top five. Here’s the other very pivotal part. They are really attacking the transfer portal… Arkansas’s gotten more four star caliber players out of that thing than any team this cycle [as of last week] That includes USC and LSU.”

The Hogs also have a great quarterback, as well as a potential formula for keeping that train chugging should KJ Jefferson leave for the 2023 NFL Draft.

“I’m thinking down the road, let’s say we have a situation next year, kind of like we have right now, where Caleb Williams or someone in his caliber is floating out there in the transfer portal. What if Arkansas becomes a destination for those kinds of quarterbacks?”

“If I keep everything else about Arkansas, you love the roster that’s being developed, you love the developmental aspect of the program. Everyone wants to go there. Apparently no one wants to leave there and you’ve got the culture rock solid in place. And then I add on this little cherry on top, it’s become a destination for high school and college quarterbacks, like Oklahoma did for a little while there, in sort of the pre-transfer portal on the quarterback front.”

Ok, so Pate’s point about “no one” wanting to leave Arkansas is hyperbole given the decisions of those like Woods and Greg Brooks Jr. But Arkansas is proving that it can replace those who leave with better talent. In Woods’ case, the incoming upgrade in the form of Jadon Haselwood took a season to happen.

Going forward, that long of a wait will prove to be an exception. As Arkansas emerges a true destination program, its upgrade cycle will only accelerate.