Search
Home Arkansas Football “I’m Going At Their Necks”: Mike Woods on Georgia, Florida If They... 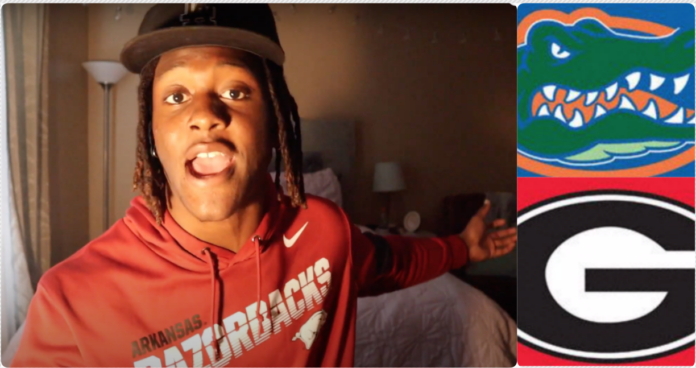 The SEC football schedule gods have spoken and Arkansas has been “blessed” with a 2020 gauntlet that looks like something out of a horror film.

With more than half of the schedule taken up by No. 2 Alabama, No. 4 Georgia, No. 5 Florida, No. 6 LSU, No. 8 Auburn and No. 9 Texas A&M (rankings according to CBS), it’s no wonder that Arkansas was the only SEC team deemed to have an “absurd” schedule, according to 247Sports:

“The jump between the Auburn, Vanderbilt, and South Carolina schedules is absolutely crazy. Arkansas is more than two standard deviations higher than the average schedule. No other team is much more than a half above,” Bud Elliot wrote.

Adding Florida and Georgia to an already hellacious schedule “is so extreme it makes me wonder if Arkansas didn’t volunteer to get these games out of the way in a year in which it knows it won’t be very good.”

“The Razorbacks only play four of the bottom eight teams in the league, by far the lowest of any team.”

As you can imagine, the national talking heads aren’t giving Arkansas the time of day. ESPN’s SEC writer Chris Low predicted these 2020 Hogs would go 1-9, while ESPN’s Mark Schlabach has slotted Arkansas at 0-10.

Arkansas wide receiver Mike Woods has seen and heard much of the naysaying. He knows, outside of Laura Rutledge, Arkansas doesn’t have many believers in the national media landscape.

None of this is fazing Woods, however.

“This is the year for us. We had two mediocre years, looked real bad and to everybody we’ve been a laughingstock. How would it look if the laughingstock came back?,” he said on a recent video on his YouTube channel.

“…We got a chance to shock the world, ’cause we ain’t won a SEC game since I’ve been here. So the Hogs ain’t scared, bro. Like the fans and the reporters? No offense but they are more scared than us, and we got to play.”

The riding will begin on September 26, with a home game against Georgia. That’s a game ESPN gives Arkansas an 8.8% chance to win, according to its Football Power Index.

Here’s a rundown of the odds that ESPN gives the Hogs versus all opponents, as compiled by HawgBeat’s Andrew Hutchinson:

On his YouTube channel, Woods broke down what he thinks of Arkansas’ two top opponents out the East.

“Georgia gets a chance to come here, and we get a chance to dog them. That’s what it is. I’m going to try to dog them boys. Bro, all-SEC [schedule], man? It’s a chance for me to show out. I’m honest with myself. I’ve been mediocre for two years. This is my year to blow up, man. I’m excited. Ain’t no sugar in my blood, man. I’m excited, I’m chomping at the bit. Georgia and Florida are crossing me? Oh, I’m going at their necks. Real talk.”

Projected SEC opening lines for Sept. 26 via the great @_Collin1

No doubt, there could be some very real talk among the Bulldogs in Athens, Georgia once they see these words. While Georgia has some question marks as it looks to find a replacement for Jake Fromm at quarterback, and adapt to new offensive coordinator Todd Monken’s schemes, it too will be raring to go come September 26.

Mike Woods wouldn’t talk like this publicly, though, if he didn’t truly believe in himself and his teammates. If he and other Razorbacks come out with the kind of burning, competitive fire that the program hasn’t seen in years, then a competitive game is possible — especially if Georgia underestimates Arkansas.

As Woods said, “If we play, we have the opportunity to have the biggest turnaround in college football history and make the most noise out of any team. No team has a better opportunity than Arkansas.”

Below watch Mike Woods’ entire Q&A, in which he also talks about his plans if football doesn’t happen:

Below, Woods talks about catching three touchdowns in the Hogs’ most recent practice. Woods chimes in on Franks: “I think he looks great. He’s making throws on the run, he makes his reads real quick. As soon as you come out of the break, the ball is right there. I love the timing. Like I said, he knows audibles at the line and different things to do. He’s really experienced and mature, and he knows how to run an offense.”