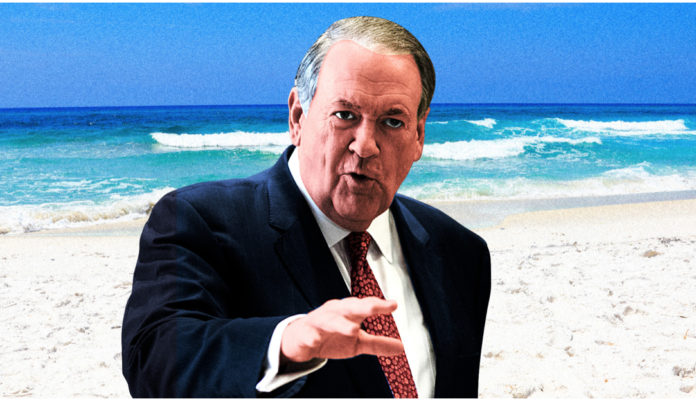 These days, former Arkansas governor Mike Huckabee lives in a $3 million home near Destin, Florida. The extreme shelter in place measures in his county forbid the use of use of all beaches, public or private, to stop the spread of COVID-19.

That means, as Huckabee as publicly lamented, he and his brood can’t go into their own backyard and frolic on the very beach property that is deeded to him.

This prohibition, however, hasn’t prevented Huckabee from kicking sand in the eye of Arkansas’ most despised SEC rival.

While telling a story from 1997, during his second year of a governorship that lasted till 2007, Huckabee recalled flying down to Baton Rouge to attend a game between unranked Arkansas and No. 17 LSU.

Huckabee is not a fan of football games at Tiger Stadium.

“That is the worst place on God’s earth to be, not just for football,” said the 64-year-old two-time loser in the Republican presidential primaries. “I’d rather be in a drunken mob at the Democrat National Convention. It’s just that awful.”

Fortunately, Huckabee enjoyed the ride down with Frank Broyles, the longtime Arkansas athletic director. Broyles, whom Huckabee loved, had a problem.

Danny Ford, then Arkansas’ football coach, was struggling in his fifth season on the Hill. Although Ford had led the Hogs to their first SEC division title in 1995, he’d suffered a 4-7 record in 1996 and a 5-game losing streak in 1997.

The Hogs limped into the LSU game with a 4-6 record.

“Governor, I’ve got a problem,” Huckabee recalled Broyles saying. “My problem is I got to let Danny go, but if we get down there and beat LSU, how am I going to explain to the fans that I fired the man that beat LSU down in Death Valley?”

Arkansas ended up losing that game 31-21, so Broyles never had to deal with that specific issue.

In a wide-ranging interview with the hosts of “The Show With No Name” on Buzz 103.7, Huckabee talked Hog coaches when he veered away from politics.

Even then, though, he couldn’t help but wade into a little hot water.

He admitted to rooting for the Hogs this past season from “a bunker” while managing to make a joke that would make hundreds of millions of Americans and Asians alike cringe.

Last November, “I heard they were hiring a new Razorbacks coach, and that they were bringing one in from Beijing, China. His name was “Win One Soon.”

To Huckabee’s credit, he showed more racial sensitivity when discussing the legacy of Nolan Richardson, who coached the Hogs for five years of the years Huckabee was in the Arkansas Governor’s Mansion:

“I think the whole world of Nolan Richardson,” he said. “I know he and Coach Broyles weren’t always tight, but there’s, to me, no one who was a better motivator of young men who took risks with young men, some of whom he salvaged and made men of and some he just couldn’t fix because they were so deeply ingrained into their own mind.”

“I’ve never seen a person who could motivate people like Coach Richardson and coach basketball in a way that was unique and powerful. And I just think the man stood tall above others in a way that we may never see again.”

“When people would say, ‘Well, coach sometimes acts like he’s got a chip on his shoulder,’ I’d say ‘If you understood what he went through, having to stay in different motels than the rest of the team because he’s black, you’d have a chip on my shoulder too'”

“I just loved the man. I thought that he was a unique, wonderful, motivating coach and did so much for Arkansas. And I’m so glad they named the [court of Bud Walton Arena] after him because that was an appropriate tribute to a giant, not just for the state, but for the nation.

Below listen to the whole interview, including a part when Huckabee complains about the potential arrests of his three and eight-year-old grandchildren: