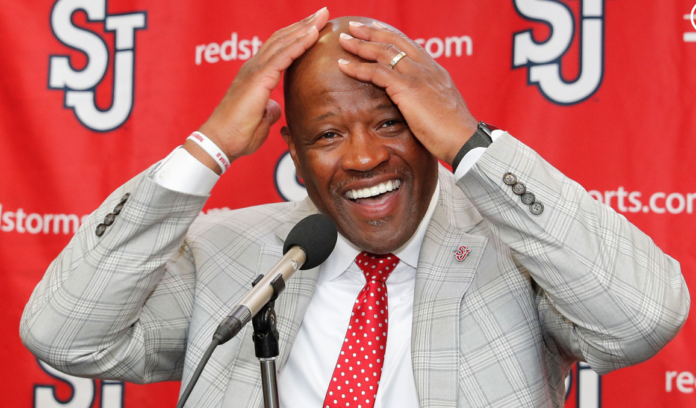 Nearly one year after leaving Arkansas, Mike Anderson’s streak of never having a losing season lives on. At the start of this past season, the former Arkansas head coach played up his ties to Nolan Richardson and had some self-deprecating fun with his inability to get his Hogs to play at the same level as Nolan’s Hogs.

“We’ll go through some phases,” Anderson told ESPN going into his first year at St. John’s. “It may be more like 25 minutes of hell, 15 minutes of what the hell are we doing? But it’ll eventually get better and better.”

That promise of better times always around the corner is something Hog fans got used to during Anderson’s eight seasons on the Hill. St. John’s got off to an 11-2 start this year, including a win over No. 16 Arizona, and Anderson had Reddies fans nearly as hyped as Musselman had Hogs fans when Arkansas burst out of the gates in non-conference.

Most Razorbacks fans want to see Anderson do well at St. John’s. They still admire the man. But most were not surprised to see his system fall flat in the competitive Big East.

St. John’s finished with a 5-13 record in conference. Anderson’s Reddies were 1-5 against ranked Big East teams:

Granted, St. John’s has won two of its last three games, including a big one over No. 10 Creighton.

Heading into the Big East tourney, these recent wins are enough to make Anderson say the same things that Arkansas followers have heard time and time again:

“I think this team is built for tournament play,” Mike Anderson said on Tuesday. “I look forward to this time of the year, especially with the way our team evolved over the season. … The tournament is a different mindset.”

“Everybody’s 0-0. It’s a new season. Everybody’s got an opportunity and that’s the great part about the postseason. You survive and advance or you lose and go home.”

Let’s replay one part of the above: “The tournament is a different mindset.”

Why, exactly, can’t a team usually play with tournament-level intensity and focus during the regular season, too?

The answer: They can. And, in fact, the best college teams do.

Under Eric Musselman, Anderson’s successor at Arkansas, the Razorbacks are far from one of the best teams in the nation. They finished 19-12 in the regular season, about on par with preseason expectations.

If not for a stretch without Isaiah Joe, however, they would have at least two more wins right now and be a lock for the NCAA Tournament after an opening-round win in the SEC Tournament.

Going into the season, March Madness seemed like a pipe dream.  More specifically, a pipe dream with crack in the pipe.

Sure, we’ve gotten the automatic qualifier by winning the whole SEC shebang before, but that’s when Arkansas “only” had to win four games in four days. Plus, during that magical SEC Tourney title run of 2000, the Hogs had much more depth with the likes of Brandon Dean, Sergerio Gipson and Joe Johnson:

Dean was the best little-man dunker in Razorback history. Watch the 6’1″ dynamo yam it on Auburn’s 7-footer at the 4:42 mark for proof:

This time around, Arkansas would need to win five games in five days. That isn’t going to happen. They just aren’t deep enough. Still, Eric Musselman has done a brilliant job with the team he inherited. It’s amazing to think these Hogs were an Isaiah Joe injury away from being a lock for March Madness.

What if Mike Anderson had stayed?

If Anderson had not been let go…

—I’d bet my house that we would not have 19 wins going into the SEC Tournament.

—These Hogs would not be playing as hard for Anderson as they have for Musselman. As Mason Jones recently told Bo Mattingly on the Hog Pod: “We might be small and we might be limited on depth, but we play hard, we play strong and we give it all we got every game.” [Translation: This team doesn’t need to be in a tournament to lock in and play with a “tournament mindset.”]

—It’s probable Jimmy Whitt, (who is vital to this team) would have never transferred back to Arkansas if Anderson, the coach he transferred away from, was still here.

Anderson ranks alongside Mark Few, Tom Izzo and Roy Williams has the only long-time major college basketball coaches to never have had a losing season.  There’s no doubt that’s an impressive claim.

Aside from one Elite Eight run at Missouri, Anderson hasn’t taken a program to the next level — nor has he given hope to fans that he can.  His lone great Missouri is what the kind of season that Gonzaga, Michigan State and North Carolina fans expect every season.

Arkansas fans would have felt like they “lucked” into such a season if it ever happened for them in the Mike Anderson era. St. John’s fans are probably already starting to feel the same way.

Still, let’s give Anderson some credit.

He did recruit Mason Jones, who won co-SEC Player of the Year. That means Anderson ended up signing two eventual SEC players of the year to Arkansas (Jones and Bobby Portis). Nolan Richardson, meanwhile, signed only one such player (though Corliss Williamson did win it twice.)

But Anderson also kept whiffing on signing the kind of quality depth to replace a Portis or Gafford. While Moses Kingsley replaced Portis, Arkansas struggled to develop frontline depth around Kingsley.

And the Hogs had absolutely nobody to replace Gafford. That ended up being the team’s biggest Achilles Heel all year.

Musselman has done more with less.  Anderson did less with more.  We should be excited about the future of the program under Musselman.

I’m not sure that St. John’s fans can say the same.

-Tommy Foltz contributed to this column

Anderson talks about his team’s win against No. 10 Creighton — his most impressive victory in years:

For more on Mike Anderson’s transition from Arkansas to the Big Apple, check this out: