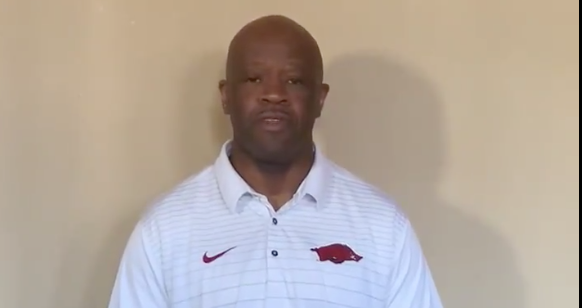 Today, Mike Anderson gave his first interview with Arkansas media since he was fired as the Hogs head coach in March 2019.

In his interview with radio host Josh Bertaccini, he would get around to talking up Madison Square Garden and his new program, St. John’s, as expected. But before he did any of that, he made sure listeners knew where his heart is in this topsy turvy post -COVID world in which news breaks at a frenetic pace.

Anderson first thanked medical workers and first responders for their work during the coronavirus pandemic. “We should all salute them, and we do it each and every day.”

“Also, Dudley Dawson — I understand he was in the hospital last night and I just want to say he’s in our thoughts and prayers.”

“That’s a good mention by you,” radio host Josh Bertaccini replied. “We are thinking about Dudley this morning, a longtime and tremendous Razorback beat writer.”

Dawson, who covers recruiting and Arkansas sports for Hawgs Illustrated / WholeHogSports.com, is one of the most experienced Razorback basketball writers of all time.

On Thursday night, Dawson wrote the following on his Facebook page:

“I am resting comfortably tonight in the ICU at Washington Regional Hospital after having a series of strokes on Wednesday afternoon and night. Much love to doctors and staff for taking care of me and my wife Petra for getting me here.”

Over the next few hours, a tidal wave of well wishes came from fans, readers, players and coaches alike. Plenty of other media members, too. (I can attest that Dudley is one of the nicest guys in the business. He’s always been tremendously helpful any time I had a question about the Hogs program.)

In the the early 1980s, Dawson served as a team manager for the Arkansas Razorbacks basketball team in the Eddie Sutton era. He came from Newport, as did Razorback great Charles Balentine.

Dawson’s stayed in the loop when Noland Richardson and then volunteer assistant Mike Anderson came to Fayetteville in 1985. His familiarity with program provided invaluable connections when he began sportswriting for the Northwest Arkansas Times in 1988. The Razorback games beat was already taken, but it was clear from the popularity of Otis Kirk’s newsletter there was a demand for more recruiting news. So Dawson started writing features on the state’s top recruits, which developed into weekly articles.

Dawson fell in love with recruiting in the early 1990s, when he went to Indianapolis to report on West Fork’s John Nelson at the Nike All-America basketball game. There, Dawson got a sneak peak at future NBA MVPs.

“When I went up there and saw Allen Iverson and Tim Duncan and several other players, I was hooked on recruiting and started elevating it with our newspaper from that point,” he told me a few years ago for an Arkansas Life feature.

By the time Arkansas won the 1994 NCAA national championship game in basketball, interest had spiked to an all-time high. Dawson was cranking out football or basketball recruiting articles nearly every day while traveling to numerous all-star camps and writing features for Hawgs Illustrated magazine.

Dawson also covered Razorback basketball during the 1990s and said at first it was tough to “disassociate myself from any fandom” given his background with the program. He was especially close to Mike Anderson, who was Nolan Richardson’s assistant for 17 years. Anderson console Dawson when his former wife died from cancer in 2001. “He was one of my closest friends and was a real help when my wife was battling cancer and going through that.”

He’s active on Facebook and on Friday afternoon said he was moved from the ICU unit to a regular room.

And he had this update for friends, too:

To listen to the interview with Mike Anderson, in which he talks about his feelings toward Arkansas after leaving, go to the 40:18 mark here:

And did you know that Otis Kirk was the first person to write primarily about Razorback recruiting?

Find out more about his life, and the backgrounds of Hog writers Trey Biddy and Richard Davenport, in my piece below:

For a moment, let’s put aside the woes of the football program and shine a light on one thing the Arkansas athletic department did right.

On Sunday, the Razorback fans experienced something very rare in college sports. They welcomed with open arms a man just fired a few months ago: Mike Anderson, who made his first public appearance in the state since being let go on March 27.

The occasion was the unveiling of the Nolan Richardson Court at Bud Walton Arena before the UA-UALR exhibit that kicked off the Eric Musselman era. For at least 20 seconds, starting when Anderson first came to the court, the crowd of thousands gave him a rousing cheer:

Less than seven months after being fired, Mike Anderson returned to Bud Walton Arena to be here for today’s Nolan Richardson Court ceremony. Just listen to this ovation… #WPS pic.twitter.com/7DelvtWp34

There are a few reasons for this.

For one, Mike Anderson gave one of the most heartfelt thank-you messages ever left by a fired coach (see below). This made Arkansas fans, many of whom never stopped supporting him, love him all the more. Indeed, between this reception and the honeymoon he’s getting at St. John’s, Anderson has become the most popular recently fired head coach in college basketball or football I have ever seen.

Secondly, since Anderson’s firing, the football program has continued to struggle, doing far worse than anybody expected in Season 2 of the Chad Morris era. These struggles make Anderson’s “mediocrity” look all the more acceptable in hindsight, despite the difference in sports.

While many fans expect Musselman to build off Anderson’s work and return the Hogs to the Sweet 16 in the next three seasons, many would also love to see a Hogs football team that’s anywhere near successful in that sport as Anderson was in his.

Finally, there’s the most important reason: Anderson returned to support his old coach and mentor, Nolan Richardson. Anderson, an assistant at Arkansas decades before he was its head coach, wouldn’t have missed that for the world — even if Hog fans had booed him for it.

“Mike’s just like my son. I had him ever since he was 19 to 20 years of age,” Richardson said afterward. “Mike has been in part of everything we’ve done. For example, we won the National Junior College Championship, and who do we play? Mike Anderson’s team. We won the NIT, Mike was on my team. We win the National Championship [with Arkansas in 1994]. Mike was my assistant. He’s been a part of the family. Any time a player that I would have, he becomes a part of my family. That’s life. Mike was one of those guys that was with me 20-22 years altogether.”

“The thing that I enjoyed the most is how the fans appreciated him when he came out, the announcement that he was coming out.”

“You will never find anyone as genuine. Sometimes I wish I could’ve been like him, but we all are who we are, and that’s what I told him. You be you. I’ll be me. You will make people like you, and I’ll make people hate me.”

Then, in typical Nolan fashion, he hammered home the point:

“When I played my assistant coaches, I wanted to beat their ass just as bad as I wanted to beat anybody else’s. That’s old granny. She would say, “You take a sludge hammer to kill the ant, take a sledge hammer. You don’t let them get back up.’… With Mike, that’s how he played. That’s why I thought he’d be a pretty good basketball coach, and he’s still one of the few guys, that I know, that don’t have a losing record.”

“It was a beautiful day,” Richardson continued later. “The only sad part is that my wife, Rose, can’t get to enjoy what we have worked so hard for. [Because of illness] she has not been to any of this. She wasn’t at, she was in the town of Springfield when I was inducted into the Hall of Fame. Basically, she was there, not so much in the building, but outside when I got inducted into College Hall of Fame.”

Make sure to watch the actual court name unveiling, a special moment in Hogs history, below:

In the days and months ahead, there will be plenty of time to discuss Anderson’s legacy, consider where he took the program from the smoldering ashes of the Pelphrey era — and where the next coach should take it from here.

But they will miss him as a person.

Mike Anderson is a man of honor, someone to whom you could confide in and lean on for help when your teenage daughter is dying from cancer and you’re struggling in your very first year of coaching in Fayetteville (just ask Nolan Richardson about the role a young Anderson played in helping him get through the hardest ordeal of his life — the death of his daughter Yvonne).

Mike Anderson has integrity. He showed it, once again, just hours after his firing.

“Razorback Nation: It’s been a challenging day,” Anderson said in an emotional video message soon after the news broke. “When you have pride and passion about what you do, it’s hard to say goodbye.”

“I had an opportunity to be the head coach here; for the last eight years have been a great experience. I want to thank Jeff Long and Chancellor Gearhart or bringing me back to be a head coach. Had a lot of great players to come through our ways. We have a very good young basketball team that’s getting ready to really ascend and do some great things.”

The news of Anderson’s firing and this video set off a well spring of well wishes and support from players former and current. Here’s Bobby Portis, the best player of the Mike Anderson era:

Anderson named one of his children after his mentor’s deceased daughter.

For more on how Anderson is transitioning to his new job, and how NYC compares to Arkansas, read my piece below: