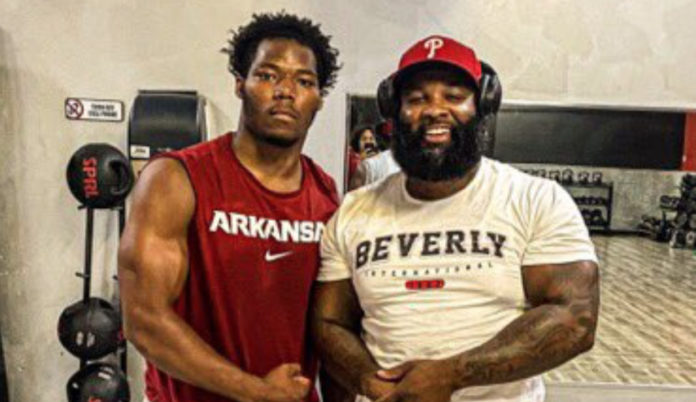 Just a little more than a month ago, Ohio native Mani Powell committed to the Arkansas football program over the likes of Michigan, Missouri, Ole Miss and others.

The 6’3″, 225-pound linebacker decided that he would get a head start on his college career by not only early enrolling in January 2022, but by actually moving to Fayetteville to attend school right next door to the University of Arkansas.

Powell and his mother have moved from Canton to Fayetteville, where he will play for the Fayetteville High Bulldogs this fall.

For one, Powell fell in love with the area during his official visit in June. “Me and my mom were stuck on Fayetteville and how much we loved it here when we were on our visit,” Powell told Pig Trail Nation’s Otis Kirk.

“So we made the decision to bring our household here and get used to the place.”

He told the Arkansas Democrat-Gazette’s Richard Davenport: “The visit is what sparked me and my mom’s interest in moving to Fayetteville. We met a lot of nice people. We liked it and didn’t see any flaws in Fayetteville.”

But he also said this: “‘There was a lot of stuff going on at my other school with my coaches,’ said Powell, who also had four members of his team shot in the past year. ‘I felt deeply about it. So after the visit to Fayetteville, we talked about it and decided to make this move.'”

That “stuff” Powell is talking about at McKinley High School in Canton isn’t your normal run-of-the-mill locker room drama.

What went down with the football program there earlier this summer is like nothing I’ve ever seen.

Powell’s high school coach, Marcus Wattley, was fired in late May alongside a few of his assistant coaches for an incident involving a highly controversial punishment of one of Mani Powell’s teammates.

In July, however, Wattley and the coaches fired back in a civil lawsuit in which they alleged that the player’s father and attorney defamed them.

In the complaint, the coaches’ lawyer states that the accusation was made “at a team training session on May 24, 2021. [The] coaches forced one of their players, referred to in the complaint as “K.W.”, to “eat a pepperoni pizza, knowing that eating pork was against his Hebrew-Israelite religion, as punishment for having missed a voluntary workout four days earlier.”

“The truth is that the coaches did not force K.W. to eat anything, let alone force-feed him any food that they knew to be against his religion to eat.

“Rather — as K.W. himself understood, along with every Canton McKinley coach and player who was present — the coaches asked this underperforming player to accept service of a meal, or in other words, “royal treatment,” while his teammates performed exercises around the perimeter of the room, to convey a much-needed lesson about teamwork, responsibility, and accountability,” as quoted in the 19News story titled “Former Canton-McKinley Football Coaches Sue School District Leaders, Father of Athlete at Center of Pizza Scandal.”

“The lesson lasted approximately twenty minutes during which the player was offered chicken nuggets as an alternative, declined the chicken, and proceeded to eat a portion of a single pizza after picking off the cheese and pepperoni, as his circled the room performed exercises with 45-pound plates.

If this sounds to you like some kind of P.E. class seance lifted straight out of a teen sitcom, you’re not alone.

This is very bizarre indeed:

Here’s why the coach employed such an unusual tactic, according to the complaint:

In another story, Wattley’s lawyer Peter Pattakos provides some more reasoning behind why he decided to punish K.W. like this:

“Pattakos said the punishment was not merely for missing a single voluntary workout. He said the student had stopped regularly communicating with his coaches, had left workouts early, and had been acting disrespectfully to coaches.

“Four young men in this program have been shot in this last calendar year alone,” Pattakos said. “That’s why it raises concerns when this young man doesn’t text his coaches and explains where he is when they are expecting them to be at a voluntary workout, even though it is voluntary.”

“This wasn’t about that (a single missed workout). This was about something much bigger.”

But the player’s attorney fired right back, calling coaches’ explanation for their punishment “bizarre” and a “desperate attempt to try to hurt (the player’s) family.” He said no matter what the coaches say, it doesn’t excuse them for coercing a player to eat pork against his religious beliefs.”

With a mess like that back home, no wonder Mani Powell was so ready for a change of scenery.

He will play his lone season at Fayetteville High for former Arkansas football quarterback Casey Dick, now head coach of the Bulldogs.

Dick was involved in a controversy of his own last fall when he allegedly told some players to cover up their COVID-19 exposure. Arkansas athletic director Hunter Yurachek issued this Tweet in Dick’s defense:

Dick remains with the team this fall, however, and Powell is excited to play for him.

“I was told that when [Powell] walked over there at the coach’s office, they thought he was one of the parent’s dads. I mean, this kid’s big. He is not small. He is a big timeline backer, and it’s going to be interesting to see how it works out,” Otis Kirk said.

Powell joins a pair of other Division I commits at Fayetteville in linebacker Kaiden Turner (Indiana) and wide receiver Isaiah Sategna (Oregon).

“It seems like we have a well put together team,” Powell told Richard Davenport.

“They seem like a great team of people. That’s always great to see in a team and it seems like they have a lot of playing chemistry so I am looking forward to the regular season.”

Check out a breakdown of Powell’s game here: