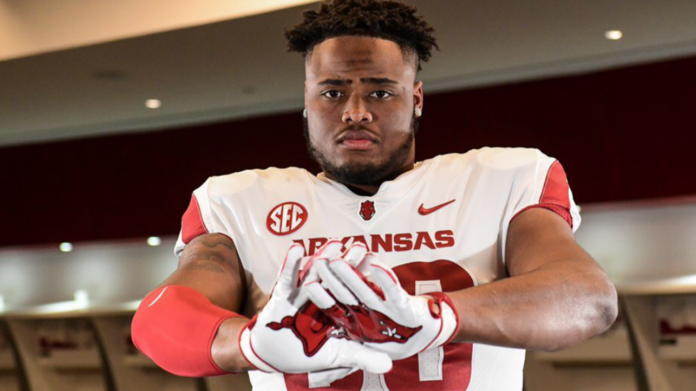 In 2018, Arkansas repeatedly failed to get a good push on the offensive line. This was one of the biggest reasons the team averaged only 336 yards per game, the second-lowest in the SEC ahead of only Tennessee.

All fall, Chad Morris needed new linemen to step in and provide heft and depth.

Well, help is finally here. In a big way.

On Wednesday, 6’8″ and 320-pound Chibueze Nwanna announced he was committing to the Hogs over his home state Maryland Terrapins. He Tweeted:

This has been a long journey but I want to start off by thanking the man above because without him none of this would be possible. I would also like to thank my family, friends and coaches for supporting in each and every way.

Not [too] long ago I didn’t even know if was going to be able to pursue the sport I love at the next level. I want to thank the coaches and staff at Lackawanna for giving me a chance to better myself on the field and in [the] class room.

They have taught me so much as an athlete coming out of high school. Over these past two years it has been a blessing to work with teammates [who have] been on the same mission and struggle as me, as I would like to thank them as well.

Nwanna spent this year at Lackawanna Community College (in Scranton, PA) and just completed a perfect 11-0 season. His announcement comes just one day after the commitment of another highly sought offensive lineman, 6’5″, 300 pound Myron Cunningham.

Cunningham chose the Hogs over Texas, Oklahoma, Texas, Nebraska, Missouri, Mississippi State, Kentucky and several others. Cunningham, from Ohio, said it mattered a lot to him that Arkansas was the first major college to offer in September.

“Out of all the schools that recruited me, Arkansas has shown me how much they want me the whole time, really the only one,” Cunningham told 247Sports.com. “That’s definitely had some weight in my decision.”

After such a recruiting coup, Chad Morris wasn’t a bit shy about showing his enthusiasm:

To read about more on how the two linemen ended up at Arkansas, check out my piece on how KJ Jefferson recruited them this past weekend.