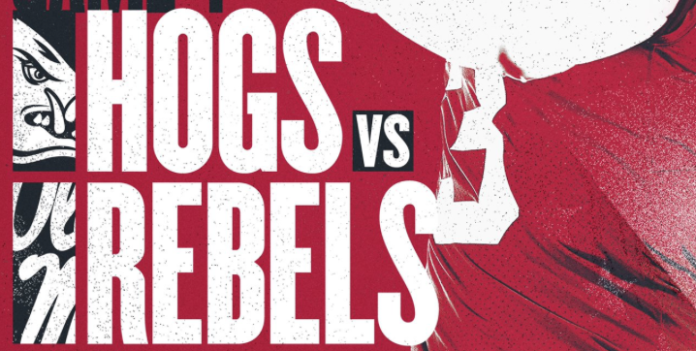 Remember all the talk this week about Arkansas winning the public relations battle in the wake of that fiasco of an Auburn fumble call?

Even though Arkansas sits at 1-2, the nation knows it should be 2-1. The Razorback football got all kinds of national acclaim from writers and analysts across this great land of ours. In USA Today’s Sagarin ratings, the Hogs vaulted to No. 21 in the nation, which says a lot about the competitiveness of the SEC.

Sure, Arkansas’ opponent today, Ole Miss, got plenty of love itself after going toe for toe with Alabama in the highest-scoring regulation SEC game ever. But you’d think that with the way Arkansas’ offense is improving, star tailback Rakeem Boyd returning to the field and the fact that Arkansas-Ole Miss in Fayetteville, most college football followers would give the Razorbacks a fighting chance on Saturday afternoon, if not favor Sam Pittman’s team altogether.

The six analysts at Oddshark, one of the nation’s largest sports betting sites, predict that not only will Ole Miss win — but they’ll do in a way that makes it seem like Chad Morris never left the Hill.

They predict Ole Miss will nearly double up on the Hogs while keeping Arkansas’ offense to under 19 points:

Look, everybody and their grandma knows Ole Miss is going to put up big-time offensive numbers behind quarterback Matt Corral and head coach Lane Kiffin.

Arkansas won’t be able to stop the Rebels, but the Hogs have proven more than capable of disruptive, ball-hawking defense that could lead to turnovers that ultimately prove the difference in the game. That’s one reason most of Vegas sees this as a close game. The Rebels are favored by 1.5-points in the latest Arkansas v. Ole Miss odds from William Hill, with the over-under is set at 76.

Where Oddshark analysts appear like they’re smoking mescaline is in their prediction that he Ole Miss defense, which is allowing 641 yards a game and on pace to be the worst unit in FBS history, would keep Arkansas under 19 points.

Unless the Hogs have some major news they aren’t releasing (like Feleipe Franks withheld because of COVID) that doesn’t seem possible after how the team performed in the last three quarters against Auburn. So far, Franks is playing like one of the nation’s best quarterbacks and he’ll have a more full arsenal with Boyd rejoining backup tailback Trelon Smith, who looks like a potential star in his own right.

“I look at Trelon as a starter,” Pittman said this week. “I think he proved that last week. When we get Rakeem back, I feel like we have two really good running backs right there. We’re trying to develop Dominique (Johnson) and (A’Montae) Spivey behind them and of course, before (Josh) Oglesby got hurt, we were real pleased with what he was doing in camp as well. Trelon, I mean he’s just a tough. You know what you’re going to get every time he goes out there. He’s a tough, physical, smart player who lights up the team when he goes out there. Lights me up, too.”

Plus, the Hogs should be getting back starting tight end Hudson Henry and star receiver Treylon Burks.

Combine that with Ole Miss’ Charmin-like defense and Arkansas’ increasing familiarity with offensive coordinator Kendal Briles’ system, and it seems laughable that the Razorbacks would be stymied so badly.

Then again, Oddshark has made some other predictions in the past that seemed laughable at first — but proved to be prescient.

Before the 2019 season opener, the site’s analysts predicted that Arkansas would lose to FCS opponent Portland State. At the time, most Hog fans didn’t want to consider that their team could be that bad in season 2 of the Chad Morris regime, even if the end of season 1 had been so disheartening.

But then Arkansas looked mostly ragged in barely squeaking by Portland State by 7 points, and that Oddshark prediction didn’t look so off.

One way Ole Miss could rout Arkansas is if the Hogs’ special teams unit plays even worse than it did against Auburn. In the first three games, this has been by far Arkansas’ worst unit. After a decent game against Mississippi State, special teams went backwards against Auburn.

An early blocked punt, which led to an Auburn touchdown, can partially be blamed on wet conditions. The same can’t be said for the flood of penalties resulting from repeated formation and coverage errors.

Those drove sports radio host David Bazzel crazy as he sat in the press box at Auburn, crazy.

“I was thinking, ‘If I see another yellow flag on a special teams player, my head’s going to explode,” the former Hogs linebacker said on The Buzz 103.7 FM this week. “So, here’s my deal, if was Sam Pittman or I was that special teams coach [Scott Fountain], they’d say [to the offending players]: ‘Let me tell you what: You won’t play again. You will not play again this year if I see a yellow flag when you’re on the punt team or you’re on the kick off team.'”

Bazzel was interviewing his former coach Ken Turner, who essentially served as the special teams coach (though that wasn’t his official title) under Frank Broyles and Lou Holtz in the 1970s and early 1980s.

While in Fayetteville, Turner coached six All-American kickers. In 1975, he recalled he coached a punt coverage unit that allowed a total of 41 return yards on 47 punts — a less than one yard per return average.

Norton, Broyles and Holtz expected execution no matter the weather: “It was all those the mud-covered days. We don’t do it right, we’re going to come back and do it again.”

Those special teams units took pride in seeing how they stacked up against other programs, too.

“Each week, Coach Turner would have a special teams meeting, and we’d look to see where we were ranked in giving up the fewest amount of return yards, or kick-off coverage, or whatever,” Bazzel recalled. “And I remember vividly, we were like top 10, I mean we wanted to be in the top 10 so much we, we had that much pride in special teams.”

“We were in the top two or three every year,” Ken Turner added.

Turner coached alongside former Arkansas defensive coordinator Monte Kiffin. For a look back at how close Kiffin’s son came to becoming the Razorbacks’ head coach, see this: