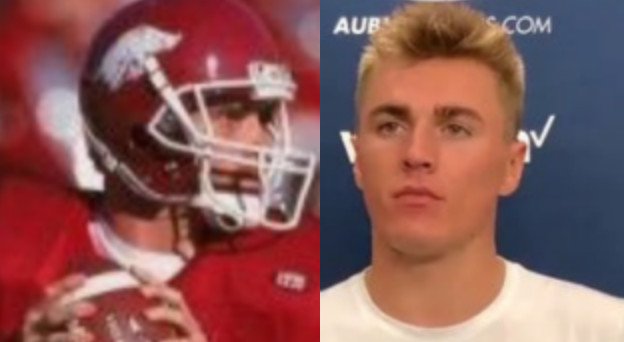 In 2020, the Arkansas vs Auburn game came down to a single play concerning what Auburn quarterback Bo Nix released. In that case, it was a football hitting the turf after Nix slammed it down late in the fourth quarter. That illegal play, which should have been called a fumble, was instead called an incomplete pass and essentially gift-wrapped the game for the Tigers.

This year, as SEC analyst Clint Stoerner predicts, Arkansas vs Auburn will be decided by something Bo Nix never possessed in the first place: elite talent.

Stoerner, a former Razorbacks quarterback, is taking the Hogs to win on Saturday. He concedes that Auburn is good on defense and very good in the running game. They are also “disciplined and generally speaking don’t carelessly turn the ball over,” he added on a recent interview with the Buzz 103.7 FM.

“But Bo Nix to me is a guy who has a very low ceiling. I don’t mean it as negatively as it sounds.”

Stoerner continued: “He wasn’t athletic enough to really excel in Gus Malzahn’s offense, and now in Mike Bobo’s offense, the arm talent just isn’t special enough to really make you pay. Early in the Penn State game he’s got a go route down the sideline — I’m not gonna say I could have made the throw — but kids with big-time arms in college football today make that throw in their sleep, and he leaves it inside and underneath by about four or five yards.

Stoerner does give Nix some credit for his gusty performance a couple weeks ago in a 21-19 win at LSU. He threw for 255 yards and rushed for 74 more. “The kid put the team on his back and won the game on sheer toughness and amazing plays, but that stuff’s not sustainable.”

Stoerner sees Arkansas being able to slow Auburn’s rushing attack while rushing only three down linemen, which will put the pressure on Nix to deliver into tight windows in the Razorback secondary.

“I just don’t think Bo Nix is talented enough to make enough big plays down the stretch” to help overcome the Razorbacks’ defense, which should be raring to make a definitive statement at home after getting shredded by Georgia and Ole Miss on the road in consecutive weekends.

Listen to the entire interview here:

“They’re just going to be kind of a hard nose, tough team that plays with relentless effort, and they’ll just play extremely hard for one another,” Nix told SEC analyst Jake Crain.

“They’re just kind of everywhere and you just got to sight them up and make sure that you communicate.”

“In this kind of game, when the defense can do a little bit of everything, you got to make sure that you’re on point with your scheme and you’ve got to be down to the detail, very comfortable with what you’re doing,” Bo Nix added. And so, that’s just going to be a test for us this week through throughout practice and us doing what we’re supposed to do and being consistent and playing clean.”

“We just have to make that explosive play, and we know we can make it. We’ve learned a lot about ourselves in the first half of the season.”

FAYETTEVILLE – Last season’s biggest miscarriage of justice to Arkansas football didn’t deter the Razorbacks from winning their next game.

Sam Pittman took great pride in his 2020 Razorbacks for that victory over Ole Miss in Fayetteville after the justice miscarriage the previous week in Auburn, Ala. Pittman apparently intends on keeping it that way for 2021.

The miscarriage of course was the “bad call” as Pittman described it, depriving Arkansas recovering what should have been Auburn Tigers quarterback Bo Nix’s fumble on the Auburn’s second to last fourth-quarter play at the Arkansas 22 with the Hogs ahead, 28-27 in Auburn, Ala.

Instead, though Nix’s attempt for a clock-stopping spike bounced backwards and was recovered by Arkansas safety Joe Foucha, it was declared an incomplete pass.  It allowed Auburn’s Anders Carlson on fourth down  to kick a 30-28 game-winning field goal with seven seconds left and evoked national criticism of SEC officiating.

But they still have Bo Nix and Carlson, and will be part of the Auburn team visiting Reynolds Razorback Stadium for Saturday’s 11 a.m. CBS televised SEC game. The NCAAF picks have Arkansas favored for Saturday’s game by 3.5 points.

Pittman was asked at the first of this week about motivating his 4-2 17th-ranked Razorbacks with last year’s grievance.

“I think our deal would be more right now is winning our home games,” Pittman said.  “We’re undefeated (3-0 over Rice, Texas and Georgia Southern)  in our stadium. It’s been several years since we’ve been undefeated in Razorback Stadium and I think that means something.”

More than revenge for last year in Auburn, Ala.?

“I think that might be a little bit more than the revenge factor,” Pittman said.  “Because Auburn kids didn’t really have anything to do with that.  It was just a bad call.”

“You think about last year’s game but it’s all about this year,” Arkansas senior offensive lineman handyman Ty Clary said. “You’ve just got to win this year, you know.”

Arkansas junior nickel back Greg Brooks and sixth-year senior linebacker Grant Morgan, both on the field when officials ruled Foucha’s recovery as too long after the fact to be counted as a recovery, during Tuesday interviews parroted Pittman.

“I couldn’t control what they called,” Brooks said. “So really it’s over now. We’re just worried about getting this win the weekend and focusing on this game right here.”

Morgan also expressed it’s time to move on though his recollection of the play certainly shows it’s not forgotten.

Yes, but how it was lost does still stick in Hogs’ craws. For here is how Morgan recalls it.

“The way I had it in my head,” Morgan said. “The way it went was I saw the snap and I figured Malzahn or Morris wanted to go for a late shot and try to just throw us off guard.  Because Morris, when he was here, he had plays where it was a fake spike and throw it up. So, I thought maybe that was what they were going to do. I saw them fumble the snap, so I didn’t stop and ran after it.”

So did the TV crew covering the game and about everyone who saw the replays.

“I thought it could have been turned the other way, but it didn’t,” Morgan said.  “We can’t go back and look at it. We can go back and say it, and that’s kind of my viewpoint, but it didn’t change anything. Wish it would’ve, but it doesn’t matter about this game.”

What the Hogs need most changing is how to nix Bo Nix, a run-pass mobile quarterback with skills much like Matt Corral, the Ole Miss quarterback that Arkansas corralled intercepting six of his passes in last year’s 33-21 victory in Fayetteville but obviously couldn’t corral in last Saturday’s 52-51 loss in Oxford, Miss.

Morgan takes exception to defensive coordinator Barry Odom, nationally praised for Arkansas’ 4-0 start that included stifling then No. 15 Texas and then No. 7 Texas A&M, getting criticized off Arkansas struggling to stop the run on successive weeks. Now No. 1 Georgia ran  37-0 over the Razorbacks in Athens, Ga. the week prior Ole Miss running wild in Oxford.

“We had guys in certain spots,  and I’ll look myself in the mirror, who could’ve made tackles and could’ve gotten off the field, but we didn’t. So, we have to be able to do that this week and step up and make plays when our name is called. We have to be able to do our jobs and stay in our gaps and be assignment sound and just go back to doing what’s worked for us.”

If they don’t, he knows Bo Nix, and Auburn running back Tank Bigsby, 146 rushing yards vs. Arkansas last year, will work them over.

“Bo is a veteran quarterback,” Morgan said.  “He extends plays with his legs very well. And when he does it, he doesn’t just put his eyes down. He looks up always. He always finds that next receiver that’s open when he goes into scramble.”

“The O-line, they’re returning four guys. They’re real big. They’re physical. They like to run downhill. Their receivers are good. They have athletes all around. Bigsby’s probably one of the best backs in our league.”

And that, Morgan didn’t have to imply, doesn’t start with last year’s “bad call.”