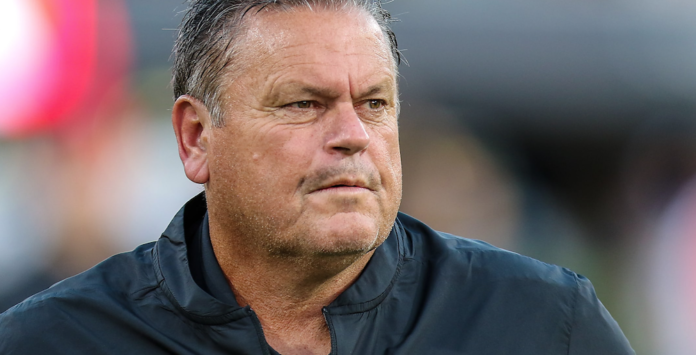 What does success look like?  Well, beauty is in the eye of the beholder…….

In December 2019, Sam Pittman into the Arkansas head football coaching job inheriting a class ranked around number 100 out of 130.  Some recruiting services had pegged Arkansas closer to No. 120. That’s like inheriting debt from your parents when they meet their Great Reward.

When the dust settled on National Signing Day 2020, he and his staff had turned that into a class ranking 29th or 30th. Pittman basically took the class from the bottom 23% to the top 23%.  The normal fan out there probably thinks that kind of turnaround is a major win for the Hogs.  I know I do.

WHAT DOES SAM THINK?

While this is a feel-good story, it’s not to the level that Arkansas needs it to be. “Having the 29th or 30th ranked class is unacceptable because we’re the University of Arkansas,” Pittman told Justin Acri on 103.7 The Buzz on Friday.

If I can quote Ricky Bobby in Talledega Nights, ”Thank you Baby Jesus!!!!”  The coach who thinks a top 30 class is unacceptable is the coach I want coaching my alma mater.

But, we have to understand that while we may have done better than 100 other programs, we did worse than 10 of 14 teams in our conference.  In fact, 7 of the top 10 classes went to SEC schools.

—Georgia (#1, a lot of Pittman recruits)

In fairness, there are probably people around the country scratching their heads and thinking how did Arkansas get a top 30 class when they’ve won 4 games in the past 2 years?

Of course, the answer to that is this golden oldie of a line: “Son, if you come here, you’ll be in the SEC and you can play right away.”

Clearly Sam Pittman does not want to stay at this level.  Arkansas is not Georgia, but the fact that Georgia got the #1 class when he was actively recruiting should make us believe that we will do nothing but get higher ranked classes, which will lead to more wins, better recruiting classes and even more wins.  It’s an un-vicious cycle.  It’s the equivalent of getting out of a rut and into a groove.

Arkansas is also not Kentucky or Mississippi State and we should beat them in recruiting and on the field.  That’s where it starts.

But, we have to keep in mind that we may have beaten them in recruiting this year if Pittman had more than about 10 days to recruit during the early signing period.  Once he had some time, even with roughly 75% of the recruits gone, he landed the #30 class in the country.

About as impressive as turning around an aircraft carrier on a dime mid-sea.

All those teams are ranked ahead of us, but they’re not out of reach from us.

What we did get was a vastly improved recruiting class that will build on itself because of a staff that is not only experienced in the SEC — but has been successful in this meat grinder of a conference, too.

For too long we’ve been bringing a knife to a gun fight.  Sam Pittman is locked and loaded……with a 20 gauge shotgun.  Next year, he’ll have a 12 gauge.  Hang on folks.  We’re about to be relevant again.

That’s my story, and I’m sticking to it.

A big reason Arkansas’ class of 2020 ranks relatively high is Malik Hornsby. Hear him talk about why he’s not intimidated competing against Feleipe Franks:

For more insider insight into the class of 2020 and beyond, see our latest post: