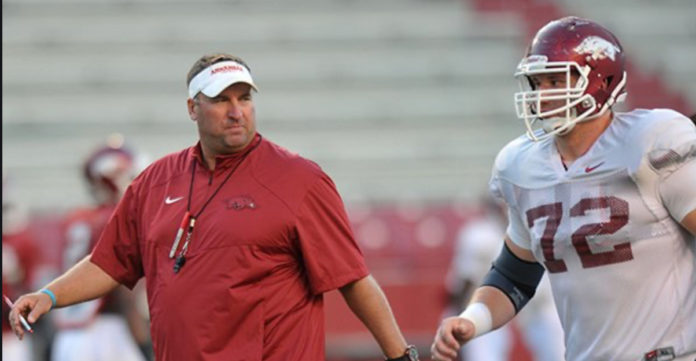 It’s no easy feat sorting out what, exactly, is the biggest news in Frank Ragnow’s life during the last few weeks.

The star Detroit Lions center recently went on a deep sea fishing expedition off the west coast of Florida with his brother and friends.

The next day was even better.

The party found a shark off Fort Myers as well as four groupers — one of which they estimated was at least 350 pounds:

As impressive as those snags were, however, Ragnow’s most impressive catch of the week came across the negotiating table.

The Lions agreed to a four-year contract extension with Frank Ragnow that is worth $13.5 million a year, according to the NFL Network’s Mike Garafalo:

This makes Ragnow the highest-paid center in the NFL, solidifying the 24-year-old Pro Bowler as a cornerstone for a franchise that is trying to find its footing after firing head coach Matt Patricia in late November.

The Lions finished 5-11 and lost their last four games.

“It was definitely a long year,” Ragnow said in an interview with Ben Leber.

“I’ve got nothing but respect for [Matt] Patricia and [former Lions GM Bob] Quinn. They were great to me.”

“They gave me a chance in this league and they worked and they worked. You can’t ever take away the fact that they did everything they could to win ball games. It just didn’t work out.”

What did work out for Patricia is deciding to move Ragnow to center and keep him there after a rookie season in which he was needed at left guard.

Years before, two other coaches had shown the foresight to know center was the position Ragnow need to be: Bret Bielema and Sam Pittman.

Of all the college coaches who recruited Frank Ragnow in high school, only those two Arkansas football coaches wanted him to play the position where he’s now set a financial standard.

Video of Ragnow going into beast mode with an alarmingly large grouper:

Growing up in Minnesota, Ragnow hadn’t thought much about Arkansas as a potential landing spot for college until one day in high school Eric Mateos, a graduate assistant who worked with offensive linemen, contacted him.

That initial conversation eventually brought in Bret Bielema, then the Arkansas football head coach, and Pittman, then the Hogs’ offensive line coach.

Pittman’s persistent effort and daily communication — something no other recruiter was doing — impressed Ragnow.

He and Bielema saw him playing center in the SEC when nobody else did.

“Every other school in the country said, ‘You’re a left tackle. You’re going to come compete at left tackle,'” Ragnow recalled on the Hog Pod with Bo Mattingly.

Ragnow said he recalled a letter in which Pittman wrote, “Frank man, I can’t wait to see you hold that Remington Trophy.”

“It’s just like he had that vision and they saw me as a center.”

Despite the rapport he built with Arkansas football coaches, Ragnow waffled on whether he wanted to play in Arkansas over the likes of his home state Minnesota Gophers, Ohio State and Florida State.

But his dad, Jon Ragnow, convinced him to visit Arkansas on a college touring trip through the South. On that trip, he fell in love with Fayetteville, and the rest is history.

Ragnow leaned on his dad and mom during the first years of his college career, which saw him alternate between right guard and center depending on the team’s needs. After Ragnow’s sophomore season, Pittman (now the Arkansas football head coach) left for Georgia.

That was a big blow, given how close Ragnow had gotten to Pittman — a relationship that endures to this day.

“He still texts my mom,” Ragnow told Leber. “Still checks on my sister, helps her with boy advice and stuff like that.”

“Just things that like a head coach for an SEC team shouldn’t be doing — but he just goes the extra mile.”

The loss of Pittman as a coach, however, was nothing compared to the pain to come.

He was in his dorm room when he received a call from Bielema he assumed would be about playing center or guard the upcoming week against Alabama.

“Hey buddy, come up to my office,” Bret Bielema said. “I want to talk to you about something.”

Ragnow hopped on his scooter and headed to the Arkansas football complex.

After entering Bielema’s office, “he handed me the phone and it was my mom just bawling her eyes out,” Ragnow told Bo Mattingly.

The news defied belief: Ragnow’s father had suddenly died of a heart attack after visiting the family’s beloved cabin in the Canadian woods.

Bielema said: “I love you. And I’m here for you, brother.”

Ragnow recalled rushing down the stairs to a basement area where “I just completely lost it.”

Bielema “came down, we’re sitting right there on the floor in the hall, just bawling our eyes out.”

Soon afterward, Bielema and his wife, Jen, joined Ragnow on a plane back to his family in Minnesota.

“I don’t think I slept that week at all,” Ragnow recalled.

Once at home, Frank Ragnow hugged his mom and then went down to the basement. “I don’t think I stopped crying for 48 hours.”

In his grief, he knew that Arkansas’ next game was against No. 1 Alabama, but he couldn’t pay it much mind at the time. ‘They sent me the gameplay the whole week but I won’t lie, I didn’t look at it.”

The funeral was Thursday. A group of Razorbacks including Coach Herbert and Jeff Long attended, and Frank gave his dad’s eulogy. They flew back Thursday night.

Somehow, through it all, Ragnow finished the season strong. He got All-American honors.

Football and schoolwork filled the empty hours, when memories of all those times he let his dad’s attempted phone calls go to voicemail arose.

“Probably unhealthy, but I honestly just don’t think I ever took the time to actually truly grieve,” Ragnow told Leber.

“It’s caught up with me. The grieving process has been really hard for me.”

Ragnow credits Arkansas football fans with helping him through those dark times. Some, for instance, sent direct message condolences to him on Twitter.

“I can’t describe how much that state, that fan base, everybody in that community mean to me,” he told Bo Mattingly.

“Razorback fans are first-class and they care about you as a person. You guys mean the freaking world to me.”

Frank Ragnow is one tough honcho, to put it mildly.

When the entire story of his NFL career written, perhaps his most awe-inspiring chapter will focus on the time he played an NFL game with a straight-up broken throat.

It happened at the end of last season in a Lions game against Green Bay.

“It’s the 8th or 10th play of the game and we were running a run play to the right and I’m on a double team with my guard and we’re coming off to the second level,” Ragnow recalled in his interview with Leber.

Then “awkward hit” ensured where “the linebacker got under me and I guess, I don’t know, somehow got below my chin and in between my shoulder pads — probably bad technique by me— and got the crown of his helmet right into my throat, and [then] my throat hurt.”

“I noticed instantly was my voice went from 100 to broken squeaky dog toy. That’s when I knew something was wrong.”

“I’ve never had that injury, so I thought I was just being soft. Like, ‘Oh, I got a sore throat. I can’t really say anything to the guys.’ But definitely something was up. That’s when I knew.”

“I called my trainers over and I’m like, ‘What’s going on here? I can’t talk.’ They’re trying to figure it out and they determined that nothing was dislodged or moved enough to mess with my airway, so I was good to keep playing.”

“They had no idea that it was fractured at the time, so they just cleared me and we watched and we made sure I could breathe.”

“I had to go over to [Matthew] Stafford and I was like, ‘Here’s the deal. I can’t really talk, so you’re going to have to be a little more vocal with the offense and line stuff.'”

“Then I talked to my guards and it was a group effort. We got it done.”

Frank Ragnow shares a funny locker room story, as well as his thoughts on “Hammer Down” Chad Morris, here:

In 2021, Ragnow may be blocking for former Razorback Rakeem Boyd, who signed a contract with the Detroit Lions: