Search
Home Arkansas Football Around the SEC Poaching this Star from LSU Would Have Upgraded Hogs’ Recruiting Class from... 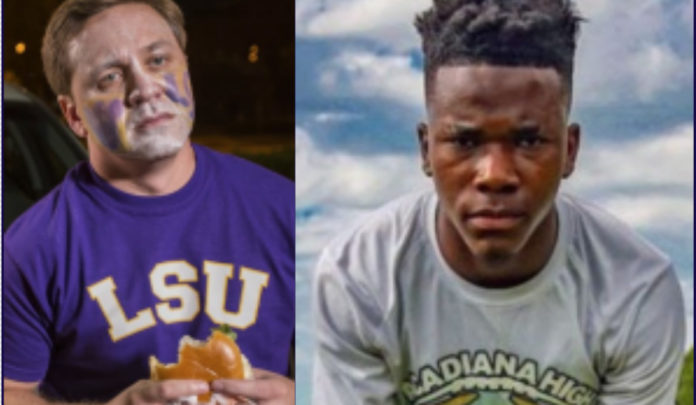 The drum beat of “must recruit better” has been beaten so hard, for so long, that it’s now a part of every Razorback football fan’s psyche. The last couple decades of recruiting rankings, with their intricate star systems and metrics, have made it clear that when the overall talent that Arkansas brings into its program is consistently in 40th percentile when compared to the rest of the SEC.

Since the modern recruiting era began in 2002, Arkansas has finished with an average conference ranking finish of 9.3 when it comes to its annual recruiting classes, HawgSport’s Danny West reports. As you can see below, Arkansas has never finished higher than No. 5 in the SEC and No. 18 nationally. In fact, it’s only cracked the Top 20 nationally twice:

How Arkansas Recruiting Classes Have Rated

This year, Arkansas should return to the top 20 when it comes to 247Sports composite rankings, which take into account multiple outlets’ rankings.

On Thursday morning, Arkansas got Samuel Mbake, a 247Sports ranked 4-star wide receiver out of Georgia. That gave the Razorbacks 21 commitments and a team score of 217.96 – good for No. 17 in the nation.

Here are the others who signed on Wednesday:

As big as getting the likes of Mbake and Myles Rowser (blue chip DB commit who did not sign on Wednesday) are, they were not the biggest catch Arkansas could have made. That title went to blue-chip Louisiana cornerback Laterrance Welch. The 6-1, 180 pound dynamo out of Lafayette would have been the Hogs’ highest-rated signee if they could have flipped him:

A top 15 national finish would set the record for highest finish in modern Arkansas football history and add ammunition to the argument that Sam Pittman deserves to be paid $7 million, which is the reported price point of his most recent contract request.

As the numbers stacked up on Tuesday, getting Welch would have landed Arkansas at No. 5 in the SEC in this projected way:

Ultimately, no, the Hogs didn’t get Welch, who signed with LSU late Wednesday afternoon. Still, Arkansas the Hogs finished early signing day at No. 19 nationally – only the third top 20 finish ever in 247Sports’ composite rankings history. As a sign of how crazy competitive the SEC is, that’s that’s still only good for No. 9 in the conference – just outside the top half which Arkansas needs to finish in to begin to compete for titles against Alabama, Georgia and other top programs with so much future pro talent that you might as well learn how to bet on NFL games if you want to get in on the action.

It should also be noted that the 2001 Razorback recruiting class, which featured 5-star Ahmad Carrroll and four stars like Jeb Huckeba, De’Arrius Howard and Shawn Andrews (a future two-time All-American), very well could be the standard setter had all SEC teams which ranked using the more comprehensive ranking system which would start a year later.

While Sam Pittman and Sam Carter did not ultimately convince Welch to flip, it’s a testament to where they have helped take the Arkansas football program that a Louisiana native and diehard LSU fan seriously considered it. The coaches also achieved an even more impressive deed just convincing star safety Jalen Catalon to return for 2022 when Catalon was a projected to be one of the top safeties in the 2022 NFL Draft despite his season-ending injury:

While Catalon is the biggest get Sam Carter will get this off-season, adding Welch to the mix — to go along with up and comers like Myles Slusher and 4-star Myles Rowser — could have been the first step in turning Arkansas into a new “DBU.” Especially in light of the fact Montaric Brown just became the first first team All-SEC Razorback defensive back in more than a decade.

Even with Welch sticking at LSU, Arkansas is still making huge headway by getting into the Top 20 nationally for only the third time ever. That must become a regular occurrence for the Arkansas football program to take its next step beyond feel-good respectability into legitimate contention.