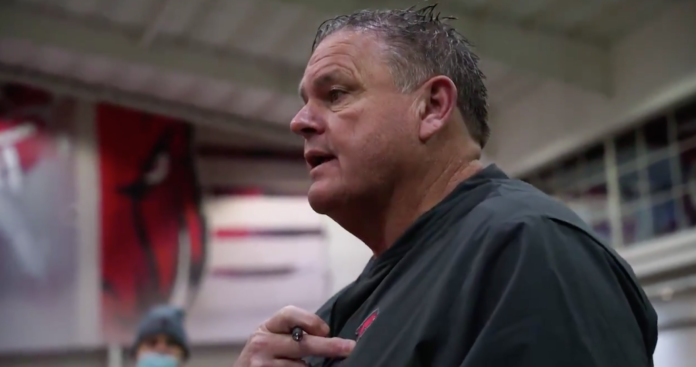 The biggest win in the history of the Razorback women’s basketball team keeps making waves.

Arkansas’ Thursday night take-down of No. 3 Connecticut, a program that hasn’t missed a Final Four since 2007 — and won half of its sport’s national titles in the 21st century — sent ripples through the national media.

A top ESPN.com article on Friday asked the question “Should UConn be worried?” after the Huskies’ first loss of the season, giving up the program’s highest field goal percentage (52%) to an opponent since 2011 and the most points (90) since 2001.

“This is more a case of what Chelsea Dungee did right than what UConn’s defense did wrong in Arkansas’ 90-87 win,” analyst Mechelle Voepel wrote. “She’s one of the country’s elite scorers, and has put up at least 30 points 11 times in her Arkansas career, against all kinds of defenses designed to stop her.”

By beating No. 4 Baylor earlier in the year and then knocking off No. 3, Mike Neighbors’ team has done something the men’s Razorback team hasn’t achieved since 1994-95 — beat two Top-5 teams in the same season. (In ’94-’95, Arkansas beat No. 5 Kentucky in the regular season and No. 4 North Carolina in the Final Four.)

It’s a feat that the football team has never accomplished, even during the height of the Frank Broyles and Lou Holtz eras, although it’s gotten close a few times.*

Sam Pittman, the Razorbacks’ head football coach, foresees a future in which his teams regularly knock off blue blood programs again. The Lady Razorbacks’ huge win against UConn only made that vision more clear.

“What they’ve done with their program is the same thing we need to do with ours,” he told the Razorback football players on Friday morning. “Their team is headed where it’s supposed to be here. Why? Because they got girls over there that will work. They went to work, and it was really neat to see. Now, the whole game, I’m thinking, ‘That’s what we’re getting ready to do in our program. That’s what we’re going to [do].”

Here, Pittman doesn’t just mean he intends for the football team to go out and play competitively against the nation’s best teams. No, Pittman sees more. He is telling his players they are going to beat those bluebloods.

“It was a great example of what hard work and dedication and coaching and players and a player-led team can do,” Pittman continued. “They got a lot more to accomplish, but I was really proud of them, and it gave us… They wear the same Hog we wear, and play in the same league that we’re playing in. They went out of league, and they did it. I thought it was outstanding. It was a great motivation for me.”

“They got girls over there that are gonna ????. They went to ????.”@CoachSamPittman on how @RazorbackWBB is setting the standard for @RazorbackFB ?pic.twitter.com/8l3EZAtv3S

No men’s program, in any major college sport, has been as consistently excellent as UConn basketball under Geno Auriemma. But the closest out-of-conference equivalents, in football, are programs like Clemson, Ohio State, Notre Dame and Oklahoma.

Arkansas will get its first crack at a time right below that echelon in the second game of the upcoming season, when it hosts former SWC rival Texas.

In 2025, Arkansas will also get a shot at Notre Dame, which it should have played this past season if it weren’t for COVID-19. They will also open the 2022 season with Cincinnati, which was a Top 10 program in 2020 under Luke Fickell and should remain a mid-major elite so long as he’s there.

The closest approximation to UConn women’s basketball in college football is Alabama, winner of six national titles since 2009. But that’s also an in-conference powerhouse, and dominating the SEC will be the final and most difficult hurdle for an Arkansas program to accomplish. Regularly knock off out-of-conference powers would actually be an easier accomplishment.

The same dynamic is playing out with Mike Neighbors’ team this season. The Lady Hogs are only 2-5 in conference, which shows how incredibly competitive the SEC has become in women’s basketball too.

After battling heavyweights like South Carolina and Texas A&M in conference, it’s clear the women Razorbacks are prepared to beat anybody else in the nation.

Now, for Neighbors’ squad, the only question is whether they can keep it up against familiar foes.

Arkansas Football: How close has it gotten to beating two Top 5 teams in a season?

The Razorbacks have gotten close at least four times:

Let these Tron-esque intro graphics sweep you away.

4. In 2006, Arkansas shocked No. 2 Auburn on the road behind the sensational running of Darren McFadden and Felix Jones. They won the SEC West that season, and as the nation’s No. 8 team squared off against No. 4 Florida in the SEC title game.