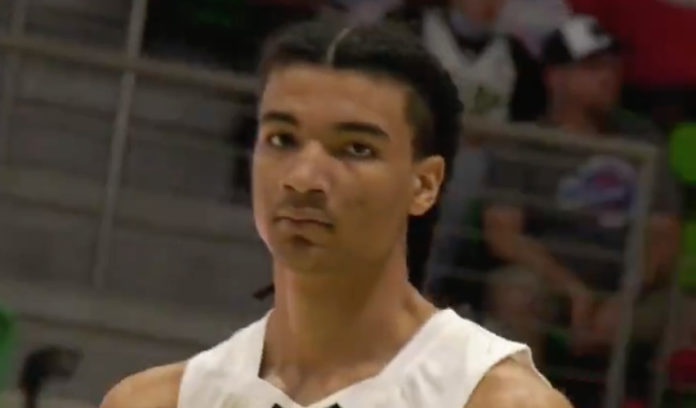 Kel’el Ware, a 5-star, 6-11 big man who helped lead North Little Rock High to a state title last season, will announce his college decision on Monday, August 9. Eric Musselman and the Arkansas basketball program remain in strong contention to land the talented center in the loaded in-state class of 2022, but they have their work cut out with other notable programs knocking Ware’s door.

We will give our insider-based prediction later in this article, but for now, let’s break down the type of player that some lucky college program will get.

Last season, as a junior, Ware averaged 16.4 points, 8.8 rebounds, and 4.6 blocks per game. While the points and rebounds look nice, the most eye-popping stat is the 4+ blocks per game. Ware’s defensive IQ is evident, though he sometimes over-pursues shot blocking opportunities. Regardless, his ability to get off the floor quickly and use his abundance of length makes him a deadly defender.

While Ware spends most of his time at the center position now, his elite raw skill and shooting potential might allow him to play alongside other big men at the collegiate level and beyond.

For the time being, Kel’el Ware relies on his own length and athleticism a lot since he’s still playing against high school talent. Don’t get me wrong, the tools and skill set are there — but many of Ware’s points come on offensive rebounds and post up opportunities that may not present themselves at the next level.

What will translate to the next level is Ware’s shooting potential.

Whether it’s a turn around fade or a catch and shoot three, Ware has shown the ability to be lethal with his shooting touch. His shooting motion is smooth with a high release, which is an excellent attribute to have for a big man at such a young age.

Oftentimes, he finds himself posted up against shorter defenders, but he doesn’t always overpower them. He does a great job at maintaining his footwork, allowing him to spin into a defender’s body and prevent them from blocking his shot, or even put a move on the defender like a shoulder fake before the turn or an up-and-under finish after a pump fake.

Kel’el Ware shows high defensive IQ, too, and seems to find himself in great positions to block shots and tip away passes that come near his deceptively long arms. He obviously has great length, but even more importantly, he’s quickly learning how to use it.

There are not a lot of weaknesses to Ware’s game, but perhaps the thing that stands the most to gain over the course of his career is Ware’s motor.

The near 7-footer is capable of taking over a game from the center position, something that’s becoming a rare commodity in today’s game. However, there are times when Ware is content to jog back and forth down the court and swat at whatever shots come near him.

He’s shown the ability to get hot in the post and from distance, and his defensive presence could, and should, be felt for every second he’s on the court. Once Ware figures out how to put together complete and dominant performances on a consistent basis, his potential will shoot through the roof. Just look at what playing with a high motor did for the career of the last big man this talented to come from central Arkansas: Bobby Portis.

While he’s stronger than his lanky frame might suggest, Ware also needs to put on a few pounds of muscle before he’s ready to be a dominant player at the next level. Fortunately, this is not uncommon at all for players of his age and isn’t viewed as a problem, but rather another exciting piece of the potential for this player ranked No. 16 in the nation by 247Sports.

Ware took an official visit to Arkansas in early June 2021. When asked to describe his trip, Ware told the Arkansas Democrat-Gazette it was, “great, exciting, and eye opener.” The near 7-footer holds offers from Arkansas, Baylor, Oregon, Kansas, Texas and Oklahoma State among others, but Razorbacks are hopeful that the combination of hometown-allure and Eric Musselman’s recruiting magic might give the Hogs the upper hand.

Ware says that Eric Musselman has “been calling me and checking up on me. He said I can impact their program a lot because I’m able to get up and down the floor, score, block shots, get rebounds, and like the pick-and-pop.” This is a great sign for the recruitment of Ware considering he’s mentioned that “how [coaches] use their bigs” will play a large part in his final decision.

Musselman loves to have versatile big men that can secure boards and stretch the floor, both things that Ware does exceptionally well.

Chance Moore, set to join the Hogs this season in the class of 2021, is a great recruit with an NBA-type build and high potential, but he’s the only scholarship freshman set to take the court next season. Is this because Musselman doesn’t want to recruit out of high school, but rather stick to the transfer portal? No, not really.

There are a few major reasons that might help explain Musselman’s reliance on the portal this summer, including the new rule of immediate eligibility and the allowance of 5th year seniors due to everyone receiving an extra “COVID year.”

In fact, if you want to see Musselman recruit beyond the portal and into the high school circuit, look no further than the loaded class of 2022.

Coach Muss and company have already received a commitment from 6-6 guard/forward, Joseph Pinion out of Morrilton, AR, and 6-4 combo guard, Derrian Ford out of Magnolia, AR. Both players look poised to make immediate impact upon arrival to the program in 2022.

Now all eyes turn to what could be the next big thing (pun intended) to come out of Arkansas: Kel’el Ware. His closest Razorback comparisons are actually two other bigs to come from central Arkansas.

Kel’el Ware’s abilities are reminiscent of two very recent Hogs: Ethan Henderson and Connor Vanover. While he is not exactly like either player, both possess very specific skill sets that can partially be seen in Ware.

Ware has the length and athleticism that allowed Henderson to thrive in high school and become a solid bench contributor during his time at Arkansas. Both players can run the court with ease, block shots and clean up the offensive glass.

While Henderson is several inches shorter and possesses more raw leaping ability, Ware finds himself making plays outside the paint on offense far more often than Henderson ever did.

This brings us to the Connor Vanover comparison. It’s easy to look at the two lanky players and see the physical comparison, but it doesn’t end there. Ware has a knack for good timing on blocked shots to go along with his extraordinary length, something also seen in Vanover.

The biggest commonality between the two, however, is outside shooting ability. While Ware has not yet displayed the ability to get hot from distance the way Vanover has a couple times in his collegiate career, his shooting stroke is still smooth and improving.

Ware has shown the ability to hit the face-up midrange jumper with consistency and the confidence to let it fly from deep. With all parts of his game seeming to be either established and improving, Arkansas basketball fans have good reason to be wishful about Ware’s looming decision.

The most likely landing destinations for Ware look to be Oregon, Texas or Arkansas. Though the big man has shown interest in Musselman and the Hogs, I would not be surprised to see Arkansas lose this race.

I think Ware ends up in Oregon, new home of former Arkansas basketball assistant coach Chris Crutchfield. However, the sports fan inside me says Arkansas is still in the running and has a more-than-solid chance of landing the raw, athletic big man from North Little Rock.

Though not a blueblood, Oregon is a traditionally good basketball school, accounting for multiple current NBA players at any given time. This allure along with what seems to be a good relationship with Crutchfield are both factors in my belief that Ware will choose Oregon. So is the general buzz among insiders that Ware is leaning in that direction.

I’m not the only one who thinks this way.

“I don’t think he’s going to Arkansas. I think there’s another destination for Kel’el Ware … I’ve heard for a while that potentially he’s a guy that wants to get out of the state to play.”

“… He hasn’t visited Texas, and I thought that may be Arkansas’s biggest competition, that visit was moved out to September. Where he has also visited, taken an official visit to, was Oregon.”

“So I’d keep an eye on the Ducks right now in that place for Kel’el Ware, but I just don’t think it’s going to be Arkansas.”

“During June, he made trips to Arkansas, Ole Miss and Oregon and just a week ago he told me that the one school that he for sure wanted to visit before making his decision is Texas. Illinois, Kansas, Memphis and many others are in the mix as well.”

“While there is no clear read on who the favorite may be, two programs are standing out to me based on what I have heard over the last 24 hours are Oregon and Texas.”

“The Ducks apparently did a really strong job with Ware during his official visit to Eugene and while Ware hasn’t yet made it to Texas, word is that Chris Beard and the Longhorns have made a strong push after Beard spent much of the final evaluation period locked in on Ware.”