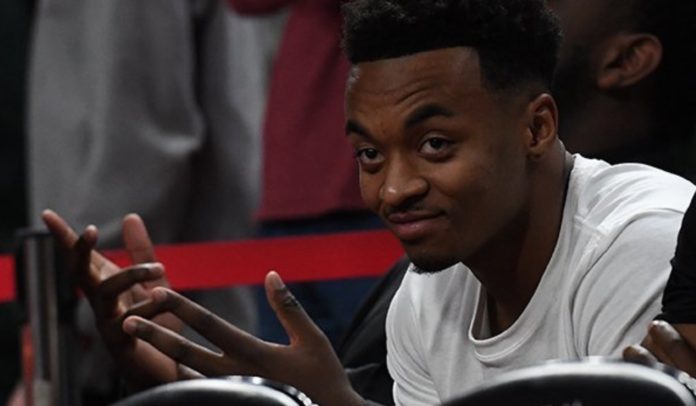 Hill, a freshman, joined the team in practice during Christmas break but as a redshirt didn’t play in a game. His father, Dr. Fitz Hill, has been friends with former Razorback basketball coach Mike Anderson since the two were assistant coaches in Fayetteville during the 1990s (Hill coached wide receivers, while Anderson was an assistant to Mike Anderson).

Justice Hill projected to be a valuable contributor to a Mike Anderson-coached team in 2019-20, playing with or behind starting point guard Jalen Harris. But Hill’s role on new coach Eric Musselman’s squad became hazier when Musselman brought in transfer points guards Jimmy Whitt and JD Notae. For weeks, rumors surfaced that Hill would leave the team.

However, Hill didn’t just come to Fayetteville for basketball.

As a two-sport star at Little Rock Christian, he also looked forward to playing Razorback football for Chad Morris. Indeed, in Hill’s goodbye Tweet, he left the door open for remaining at Arkansas through that sport:

Hill, the No. 52 overall point guard in the class of 2019, could end up at a number of schools if he decides to leave the University of Arkansas. “Although his shooting is still a work in progress, Hill possesses dangerous athleticism with high-level court vision,” 247Sports’ Pete Roulier wrote. “He received interest from other basketball programs such as Oklahoma State, Stanford and Virginia, in addition to receiving football scholarships from Auburn, Howard and Memphis, but never wavered in his pledge to the Razorbacks.”

Khalil Garland [No longer playing for the team. Instead he will serve as a student assistant. He never played in games due to a medical condition]

Jonathan Holmes [No longer listed as part of the team]

For more background on outgoing Razorback transfers, see the below previously published article:

With Mike Anderson out as Arkansas coach, and Eric Musselman in, questions still linger about the roster next season. Freshman guard Keyshawn Embery-Simpson has already entered the transfer portal. Besides him, will the basketball program keep all of its talented young players?

Will any of the stars (e.g. Isaiah Joe, whose parents are close to Mike Anderson) decide it’s worth sitting out a year to play elsewhere?

So far, the Razorbacks have dodged a big name leaving. However, today, for the first time under Musselman, a Razorback player has attempted to leave.

Center Ibrahim “Ibby” Ali has entered the transfer portal, according to HawgBeat.com.  At 6-foot-10, 244 pounds, Ali was the most physically imposing player on the Razorbacks’ roster this past season in terms of sheer mass. But he never got on the court.

It appeared Ali’s game did not progress significantly enough from his senior year at Maumelle High, where he was also a project. The Nigeria native averaged only 4 points, 5.7 rebounds and 1.2 blocks as a senior for the Hornets.

He appeared to be someone Anderson signed just to fill a scholarship spot on the roster — the exact opposite kind of player that Musselman said he wants. “We might have to do what we did at Nevada for three years, which is play guys that are small forwards or power forwards and play them at the 5 spot,” Musselman recently told reporter Andy Katz. “What we don’t want to do is we want to try to avoid making a recruiting mistake just filling a hole and that scholarship, you know, you’re kind of stuck with a piece that might not fit long-term.”

At this point, assuming walking victory cigar Jonathan Holmes goes back to walk-on status, Musselman now has two scholarships to use on high school signees or transfers, according to beat writer Andrew Hutchinson. That number would increase to three if Khalil Garland is placed on a medical scholarship.

While the chances that a big name will enter the transfer portal have gone down from a few weeks ago, it’s still a slight possibility.

Former head coach Nolan Richardson firsthand knows the tumult a coaching change can bring. Much of it boils down to how close the player was to Mike Anderson versus everything else. “Did they come to the University of Arkansas because that’s where they wanted to go to school? Did they come to the University of Arkansas because Mike Anderson was the coach?,” Richardson said in an April interview with Pig Trail Nation’s Alyssa Orange. “I mean, there’s many reasons why … When I was dismissed from up there, J.J. [Sullinger] was a very good kid out of Ohio. His dad and I were very close friends, so he just walked in [to Richardson’s replacement Stan Heath] and said, ‘He’s out of here. Nope, he can’t play for you.”

“That’s what a lot of fans and people don’t really realize. They said, ‘Well, look at the facilities, and look at this.’ A lot of times players are there because of who’s directing the traffic.”

Here’s more from the interview:

“He was like a son to me, because we went through some tough times. Me, coming to Arkansas with a sick daughter [Yvonne Richardson], not having the whole world on my team, with people who were more worried — an administration that was more worried about a game won than a life lost — and so we got closer and closer during that period.

Richardson also mentioned that the Mike Anderson firing surprised him. He thought perhaps another year was warranted given how young the team was. But he also understands “when you create a monster, you got to feed him, and if you run out of food, the monster will eat you.”

For more about the Razorback transfer situation, check out my post: