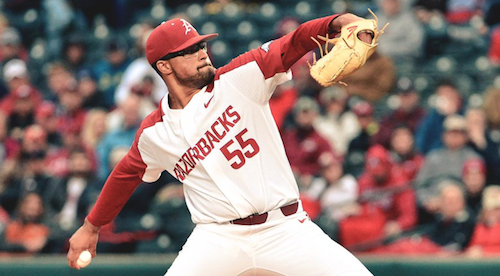 Scott Rabelais had a bad feeling heading into Thursday night’s matchup between No. 20 LSU and the No. 4 Razorbacks in Fayetteville.

The longtime sports columnist for The Advocate, Louisiana’s largest daily newspaper, had seen his LSU Tigers struggle as of late. Louisiana Tech wiped the Tigers out 12-1 on Tuesday, for instance.

He knew the Hogs, off to their best-ever start in SEC play, were especially formidable at home, going 26-5 this season. “A trip to face Arkansas at its home park in the rolling Ozark foothills looks more like an attempt to scale Annapurna (not the world’s highest mountain but statistically the most dangerous),” Rabelais wrote before the game.

Still, in theory, the Tiger fans trekking into Fayettenam were allowed some hope.

In the years under Dave Van Horn, Arkansas had struggled against LSU. “The Tigers have owned the Razorbacks in recent years, going a combined 22-6 against Arkansas since 2012 including a 6-3 mark in Fayetteville,” Rabelais wrote. “The other [reason for hope] is that despite all the problems, Mainieri’s teams usually flip a switch in May and start playing patented winning LSU baseball.”

Whatever slim hope LSU fans held going into Thursday night, though, has been demolished. Arkansas at Baum-Walker proved every bit as hellacious in the series opener as Rabelais predicted, smoking LSU 14-4 behind an avalanche of five home runs. That’s the most runs Arkansas has scored against LSU since a 14-13 win in 13 innings during the 2008 season.

Casey Martin, Dominic Fletcher, Casey Opitz, Trevor Ezell and Jack Kenley all went deep in the game. It was the second time this season that the baseball Hogs have hit five home runs in a single game (vs. Northwestern State, April 23) and fourth time with four or more. Martin has tallied the second-largest home run total on the team with 12, while Fletcher and Kenley both reached double-digits with 10 for the year.

Afterward, infielder Jack Kenley talked about his home run hitting: “To be honest, it’s a simple thing going back to when you’re a little kid. Coach would say, ‘You shouldn’t try to hit a home run. You try to hit a line drive and if you hit a line drive, it’ll find its way out.’ That’s pretty much what I want to do, is get a good pitch and put a good swing on it.”

Dave Van Horn on Jack Kenley’s Emergence As a Hitter

“We thought (Jack) Kenley would hit some home runs this year. I didn’t know he’d get to double digits. We thought he’d get close. He does a nice job of fouling off pitches and taking pitches and getting some good pitches to hit. We’ve hit a few here and there and you know a lot of times the second half of the season, when your team usually hits them, it warms up a little bit and your guys are in a little bit more of a groove offensively, seeing the ball better. I don’t even know how many we have. Every now and then it’s nice to hit some and put up some quick runs and that’s what we did tonight.”

Sophomore Casey Martin turned in a 4-for-5 game with three runs scored, but had just one RBI coming off his solo home run in the bottom of the first. It was Martin’s 12th home run of the year, one less than his total from his freshman season. Fletcher also went 3-for-4 with three RBIs and two runs scored. He’s got seven hits in his last five games and his home run off the scoreboard in the second inning was his second in three games.

Pitcher Isaiah Campbell had to battle early in the game, but settled in after giving up two runs in the first two innings to go six innings strong. Campbell worked the final four innings scoreless and retired 11 of his final 12 batters while scattering just four hits, one walk and striking out four. It was Campbell’s ninth win of the year and 10th quality start as he’s pitched six or more innings in 10 of his last 11 starts.

“I’ve said this many a time this year that (Isaiah) Campbell, a lot of times in the past, he might have given up more runs, but he’s learned how to get out of those jams,” Van Horn said. “He just gave up one. They, obviously, hit a home run in the next inning. You just tip your cap to (Daniel) Cabrera. He’s a really good hitter, probably one of the top hitters in our league. Solo home runs don’t beat you a lot of times.”

Through 50 games this season, Arkansas has hit 69 home runs as a team, just six back of the pace of last year’s team that hit a school-record 98 home runs. Over the last 10 games, Arkansas has hit 25 home runs and four have come from Casey Martin, Heston Kjerstad and Dominic Fletcher. Fletcher hit his 10th home run of the year Thursday night, making 2019 his third-straight season with 10 or more home runs. The 69 home runs this year is the most in the SEC.

“Taking that first [win] is huge,” Trevor Ezell said afterward. “Especially against a really talented team like that.  But Marty (Casey Martin) said it already  and will tell you that baseball is just a crazy sport.  We can have 14-4 win today and a nail-biter the next day, the exact opposite.  So just getting that first win under our belt and getting the wrinkles out of opening the series is big.”

UPDATED: The Hogs won Game 2 by the score of 11-6. They are on an absolute tear right now.

Now, it’s on to Game 2. If the Hogs win that, it will be their first series win against LSU since 2011. First pitch is tonight at 6:30 and the game will be televised online only through SEC Network +.

If the Hogs win this one, too, then Scott Rabelais will look even more like a Nostradamus. “It is hard to paint a scenario in which the Tigers are going to avoid being slaughtered in this three-game series,” he wrote.