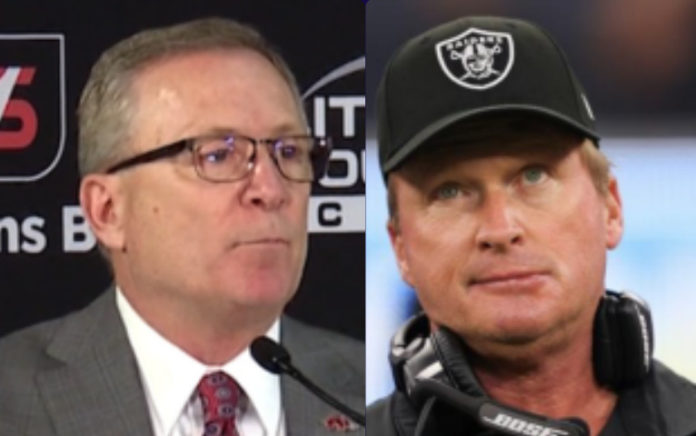 In the world of what-could-have-been, there are certain scabs that Razorback fans can’t help but keep picking. Imagining the glory that would have transpired had Carson Shaddy caught a certain fly ball in the 2018 College World Series. Fantasizing about the trajectory of the basketball program had Al Jefferson and Andre Iguodala played for the Hogs as originally planned. Thinking about the possibilities of the 2006 Arkansas football team had Gus Malzahn and Houston Nutt been able to get along.

And, of course, this hum-dinger of an alternate history possiblity: What would have happened had Bobby Petrino never ridden his motorcycle into a ditch?

The subsequent firing of Petrino by Arkansas athletic director Jeff Long set into effect a long search for a permanent head coach. During those six months of looking high and low, Razorback Nation was subjected to this:

The 2012 season was not the best of times. (Nor, thanks to Chad Morris, would it prove to be the worst of times.)

But it was also an era of dreaming about the possibility of what could come next. By the end of the 4-win season, the list of candidates for next Arkansas football coach included plenty of folks with Arkansas ties – Tommy Tuberville, Butch Davis and Charlie Strong among them.

Then there was the most pie-in-the-sky candidate that most fans would have regarded as an absolute grand slam of a hire, someone who would have brought more national attention to Fayetteville than almost any other possibility: Jon Gruden.

It was no secret that certain Arkansas powers that be wanted to make Gruden, who had already won a Super Bowl with Tampa Bay and was then serving as an ESPN NFL analyst and a commentator on Monday Night Football, into the highest paid coach in the SEC. At the time, Gruden was making $4.3 million annually as a commentator, but Arkansas was prepared to pay him something in the $6 million per year range.

The Razorbacks gave a proposal to Gruden’s team, according to Arkansas sports writer Jim Harris, a contributor to Best of Arkansas Sports. Harris believes that Long ran this proposal by Gruden’s agent to appease certain power brokers on the Razorback Foundation. While Gruden declined before a formal offer could be made, this is likely the closest Arkansas has ever gotten to hiring a Super Bowl-winning head coach who would have come in with more name recognition than any other first-year SEC coach.

Eventually, Arkansas hired Bret Bielema and the Gruden-mania that had swept certain parts of the Arkansas football fanbase was swept aside. Still, questions linger about what Gruden actually thought of the job and the Arkansas fans who wanted him so badly. How close did he get to returning to the college ranks?

We’ll finally get answers to some if not all of these kinds of questions on August 30 when Gruden appears as the guest speaker at the Little Rock Touchdown Club:

David Bazzel, the founder of Little Rock Touchdown Club, wrote in a text that he will ask Gruden about the time he got a proposal to become Arkansas’ head coach. It would also be good to hear more about the friendship between Gruden and John Daly, the Arkansas native golfer who reps the Razorbacks harder than any celebrity out there.

Indeed, Daly openly campaigned for Gruden as the Arkansas football head coach in 2012, Tweeted Jeff Long “[S]till strong behind Gruden as I still think he would be the man to take us to that level! #WooPigSooie'”

Gruden had caddied for Daly during the PODS Championship in 2008 after the two had concocted the plan together while sitting in a corporate hospitality tent sponsored by Hooters.

Would Jon Gruden Have Been Good for Arkansas Football?

No doubt, Gruden would have upped Arkansas’ recruiting game based on his name recognition and pro bona fides alone. We’ve already seen a similar dynamic play out, to a lesser degree, with former NBA head coach Eric Musselman and the Arkansas basketball program.

Yes, Gruden won a Super Bowl, but his other years (including more recent ones with the Las Vegas Raiders) weren’t as consistently great. His record in Tampa Bay in the all seasons following that Super Bowl win were 45-53.

Doc Harper, also a contributor to BoAS, pointed out that Gruden’s reputation as a football genius was bolstered by his pre-draft breakdowns of quarterback prospects on ESPN.

“That show is designed to make Gruden look like a genius. He gets to go through all the tape of a quarterback’s career and handpick a few plays that allow him to give sage advice on how to run certain situations better. It may look like an impromptu film session that we envision most every coach going through, but it is entirely scripted.”

Harper, then writing for Arkansas Fight, added: “When Alabama hired Nick Saban, they knew they were getting a top college coach because they knew what he did at LSU. South Carolina knew what Spurrier did at Florida. Arkansas knew what Petrino did at Louisville. Tennessee knew how well Derek Dooley did at Louisiana Tech, and well, there they are. Gruden has no such record. He’s never been so much as a coordinator in college and hasn’t coached at all at this level in over 20 years.”

The fact Gruden wasn’t a college coordinator doesn’t look so bad now considering what Sam Pittman has done in the last couple years in Fayetteville. But Pittman was extremely experienced in big-time college football as an offensive line coach and he has used every ounce of that experience in building the Razorback program.

The closest corollary likely was Lane Kiffin jumping from two years at the helm of the Raiders into head coach of the Tennessee Volunteers (who also tried to get Gruden in 2012) in 2009. And that was a disaster.

In the end, Jon Gruden as a Razorback coach might not have worked out well. Hard to say it would have been worse than the Bielema era, however. Regardless, it’s one of those fun alternative history narratives that are fun to bring up every so often during the dog days of summer.

And the Gruden flirtation did, in the end, produce something of lasting value. One of the most catchy anthems ever performed by Arkansas football fans came from this time:

Here’s to hoping David Bazzel rounds up these three guys and gets them to perform “Hey Grude” one final time on August 30 at the Little Rock Touchdown Club.

This may also be Gruden’s first public appearance since this went down: