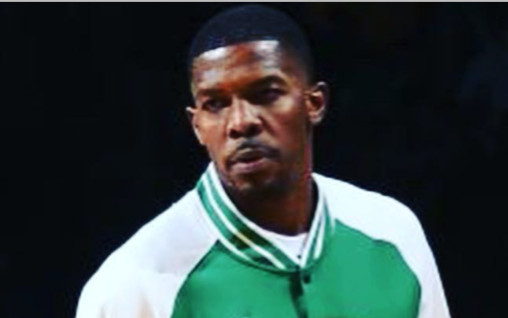 More than nine years ago, Arkansas basketball legend Joe Johnson walked onto Boston Celtics’ homecourt as a Brooklyn Net and turned what had been an NBA game into an NHL match for Celtics legend Paul Pierce. On a particularly devastating dribble move, he put Pierce on skates and cast him aside like a master illusionist playing with a doubting child.

Pierce found himself on his hands and knees while Johnson rose, untouched, to cooly swish an 18-foot jumper. At the time, I wrote Johnson’s signature move would make a nice centerpiece as part of a highlights reel for his induction into the Arkansas Sports Hall of Fame. But Johnson has since then made a strong case for induction into something much more prestigious (more on that below).

On Wednesday night, after nearly three years out of the NBA, the 40-year-old Johnson made one of the most unusual returns the league has ever seen. Signed to a 10-day contract with the undermanned Boston Celtics, the same team that drafted him out of Arkansas in 2001, Johnson appeared on the court to thunderous applause in the final minutes of the Celtics’ blowout win over the Cleveland Cavaliers.

He promptly nailed an elbow jumper, which gave him 20,407 points – the most any Razorback has ever scored in the NBA (by more than 8,000 over Sidney Moncrief). “He joked in the locker room, ‘if I get them on that hip, it’s done, they’re dead,'” Celtics coach Ime Udoka said afterward. “So, we know what he is, everybody said it as they walked in, ‘Joe is a bucket.’ That’s what he is and he’s always been, and so, that’s not going to change. Happy for him.”

Johnson’s appearance shattered an NBA record for the longest span between appearances for the same team. Johnson first played for the Celtics in the winter of 2001 as a rookie. Nearly 20 years passed before he suited up for Boston again. That’s nearly five years longer, or 1,802 days, than the span passing for the previous record setter, James Edwards:

Not bad for a guy who just a few months ago was training future Razorback Derrian Ford in Little Rock. And who was hanging out with his 8-year-old daughter in between training sessions with his 14-year-old son when he got the call on Tuesday that the Celtics wanted him.

Joe Johnson is Far From “Iso”

Johnson has said doesn’t remember “Iso Joe” taking precedence as his main nickname above all the others (remember “Joe Jesus”?) until his stint with the Utah Jazz in 2016-2018. That popularity of that nickname was further fueled during his time as a major star in the Big3 three-on-three professional basketball league in the last few years.

Yes, “Iso Joe” has a knack for breaking any defender down and scoring in one-on-one situations. But the nickname is also a misnomer since he’s far from isolating or isolated. Johnson has always prized family, friends and community above almost all else. I saw that firsthand in the way he played as a selfless star for the Little Rock Central Tigers in the late 1990s, a team I covered as student newspaper editor. I then saw it in how my classmate fit in seamlessly with the Razorbacks in 2000, when he led the Hogs to what remains their only SEC tournament victory.

Most former NBA stars who want to keep playing through their late 30s and early 40s but can’t sign onto an NBA team head to Europe or Asia to collect paychecks and keep their career going a few years longer. Even Arkansas native Scottie Pippen headed to Finland for five days to collect a $66,000 check.

But Joe Johnson chose to stay home close to his friends and kids instead of chasing fading glory abroad. Some of that is because he’s filthy rich after enjoying the $120 million contract he signed with Atlanta in 2010, but some of that is also a reflection of his priorities.

Here’s Joe running some pickup in Little Rock at the Dunbar Community Center just a few weeks ago:

If you want to see someone who is absolutely in their element, just watch with which Johnson plays in the above clip and how much he enjoys the fraternity after the game.

And here he is, back in Atlanta training former fellow LR Central product Bryson Warren:

Pure love. He’s doing all of this, including two to three workouts at the gym daily, because of pure, unadulterated love for the game. In an interview with Matt Barnes and Stephen Jackson, Johnson said he sometimes thinks about what life would have been like had he teamed up with LeBron James back in 2015, when James reached out to him to join the Cavaliers.

If he had done so, Johnson would very likely be an NBA champion given the Cavaliers won an NBA title in 2016.

Instead, Johnson said he went to Miami for two big reasons. One, he wanted to meet James in the eastern conference finals and finally knock him off – something he hadn’t been able to do with the Hawks and Nets. But also he wanted to play with Dwayne Wade, whom he respects as much as any NBA veteran.

Wade, of course, is an all-timer for many reasons, including his clutch shooting and all-around brilliance, but few players have ever loved the game so deeply. As a teen, after all, Wade once wrote a love letter to the sport itself. Johnson’s love is at the same level. He long ago stopped playing because he needed to for a living.

It’s all from the heart now.

As impressive as Joe Johnson’s longevity is, his most impressive career accomplishment is nailing eight buzzer-beating shots.

That ties him with Kobe Bryant, only one behind Michael Jordan. Amazingly, he hit five of them in his three and half years in Brooklyn.

The NBA record, of course, doesn’t even count all the game-winners he’s made in the Big3 where he’s been a back-to-back MVP who has won championships. That Johnson has been able to enjoy so much success in the Big3, while serving as a true ambassador to the game wherever he goes, is why I ultimately think he will be selected to the Naismith Memorial Basketball Hall of Fame.

If that hall of fame admitted players merely on NBA exploits, he would be borderline with more than 20,000 points and seven All-Star appearances, yet no NBA Finals appearances. But the voters will look at his total body of work, and there Johnson has been everything you would want from a true representative of the game.

He not only has become the face of the second-most popular basketball league in the United States, but he has also answered the call for the national team twice. The first time was in 2006 for what’s now the FIBA World Cup, and then again in early 2021 when he became the oldest Team USA player ever in the FIBA AmeriCup Qualifying Tournament.

If Johnson had simply gotten that ring with James in 2016, he’d be a no-brainer inductee right now. If the massive amounts of love he has received in his most recent return to the NBA show anything, it’s that he’s done enough for the game to one day get in regardless.

Johnson went into depth with a lot of subjects on an early 2021 episode of “All the Smoke.” He talks about why he chose the Razorbacks coming out of high school:

I came up watching Corliss Williamson, Scotty Thurman. I came up watching them guys. Not only that I was playing pickup with them here and there. So I saw how dominant that they was in college and they made you want to be a Razorback.

Matt Barnes: So you saw them when UCLA ran through them in the tournament?

Stephen Jackson: Those games with Arkansas and UNLV, man, those games were classic bro. Man. They were really brawling out there, man.

The meeting with me and Coach Richardson and my family, it was awesome. It was everything we expected. I mean, we committed right after that. I wanted to commit anyway, but you know. He came, sitting in my living room, talking to my mother, my grandmother, my uncles. That was an amazing feeling. You know, I really felt like I had made it after that.