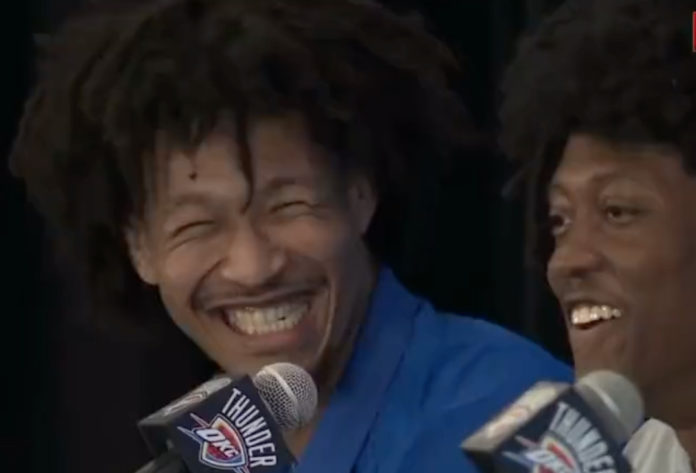 Jaylin Williams sort of feels like the last of a dying breed, which is a bit of an odd thing to say considering he was taken in the early second round of the NBA Draft last week by a team that selected another man with his exact name (even if they’re spelled differently). The Fort Smith native not only has a playing style that would have been fairly at home in the 1970s and 80s in the rough-and-tumble NBA, but the off-court stuff surrounding his two years in college basketball seems to be going by the wayside, too.

Williams’ selection marked the fourth straight an Arkansas basketball player has been taken. Not exactly slouch territory for the Razorbacks, especially as the three previous, Moses Moody, Isaiah Joe and Daniel Gafford, have all found solid footing in the League. But the flip side to that coin is that even with those four straight years, Arkansas has had only nine* players taken in the NBA Draft in the 21st century.

Bonus points if you can name them all in two minutes.

Kentucky, Florida, LSU, Tennessee, Mississippi State, Missouri, Auburn and Alabama all have more or equal number of NBA draft choices since the Year 2000 than Arkansas. Kentucky and Florida are not unexpected. But Mississippi State? Auburn? Missouri? Even with lottery picks like Jabari Smith or Michael Porter Jr. every blue moon, these are not exactly the programs that are top of mind when thinking about SEC basketball.

Arkansas has largely considered itself the second most prestigious program in the SEC since the Hogs arrived in the league in the early 1990s. For a long time, excepting the Gators’ tear in the late 2000s through mid 2010s, that has made sense. Three of their first four seasons in the league the Razorbacks were ranked inside the Top 10 in the country with two of those seasons resulting in national-title-game appearances. Five of the next seasons after that loss to UCLA in the championship saw Arkansas as a regular in the Top 25, too. It’s just most everything since has left a lot to be desired. Four straight years without an NCAA Tournament berth, three straight with one but no more than one win, then another six years missing out.

The last two years, however, look a lot more like the early and mid-1990s. Winning draws better players. Better players create more winning. Eric Musselman has led the Razorbacks to consecutive Elite Eight appearances in the NCAA Tournament, the best two-season set of results since those back-to-back title games and most recently, it’s allowed him to marshal the No. 2 recruiting class in the country. Needless to say, it’s the best ranking Arkansas has ever had in the modern era of recruiting.

Just don’t expect the same similarities to the 90s. Basketball isn’t played that way anymore. Three of the six players in the Class of 2022 Musselman brought to campus are not likely to play more than a single season in Fayetteville. Nick Smith Jr. is a projected No. 3 overall pick in next year’s NBA draft, while Anthony Black is slotted at No. 12 and Jordan Walsh at No. 21. Such a class would match the 1992 Arkansas basketball class which saw Arkansas produce three first rounders with Todd Day going eighth, Oliver Miller at 22nd and Lee Mayberry at 23rd.

That, amazingly, is the last time that Arkansas produced at least two NBA draft picks in same year. Even Mississippi State did that in 2020 (albeit two second rounders), while Missouri had two NBA picks a decade ago in Kim English and Marcus Denmon (also both second-rounders). Getting taken in the second round, especially early part thereof, is nothing to sneeze at in today’s NBA given the guaranteed money at that position. Still, going forward, expect multiple NBA draft picks coming out of Arkansas in a single year to the rule rather than exception.

Jaylin’s drafting should mark the end of the Razorbacks’ 30-year streak of not having more than a single pick in a single NBA Draft.

Smith, Black and Walsh have yet to play a single game at Arkansas. If they’re all healthy and Musselman is able to successfully integrate the 12 new players on the roster, the Razorbacks very well could be a legitimate national title contender in 2022-23. At any rate, barring a titanic collapse, a straight straight dynamite season by Arkansas would officially put the Hogs back in the Best-Program-In-The-SEC conversation with Kentucky.

Early-entry and the transfer portal have shaped college basketball more than any other college sport. The good news for Arkansas is Eric Musselman is better equipped to handle it than seemingly any other coach in the country. A man who was supreme in going the junior-college route to reload his rosters and always keeps his teams competitive has now found a deeper edge in the transfer portal, which, let’s face it, has far surpassed that JUCO route for provided tried and true college players ready to hit the court running.

It all suggests that this NBA Draft train, and more importantly for Arkansas fans, this Razorbacks’ Success train, isn’t slowing down any time soon. Just don’t get too familiar with the faces as they won’t figure to be in Fayetteville long. But that seems a more than fair trade to take if you support the Hogs. College sports have always been a business, it’s just now it’s a business that the players have a bit more control over. And as long as Musselman is running things in Fayetteville, the Hogs should reap the benefits.

*Technically, this is 11 if you count two former Razorbacks (Chris Jeffries and Jason Jennings) who transferred to another school before entering the NBA Draft.

“He really, really understands defensive spacing, defensive awareness, and he’s a great weak-side helper,” the Arkansas basketball coach told The Athletic. “You can’t even really put a value on how much that meant to us, all those charges he took [NCAA-leading 54 last year] , because what does that equate to point-wise for us? They don’t score and we get the ball back. He just affected so many areas for us.”

No kidding. Williams set the Razorback single season for rebounds in a season and overall arveraged 10.9 points, 9.8 boards, 2.6 assists, 1.3 steals and 1.1 blocks per game as a sophomore. The only thing that took a dip was his three point shooting (25.5%) but he has pretty good form and shot better from the perimeter in high school and as a freshman.

“He’ll continue to evolve and improve as a shooter,” Musselman added. “You’re getting a high basketball IQ, one of the best passers in the draft, a guy well beyond his experience and age in understanding offensive and defensive spacing, and one of the best help defenders in the draft. There were multiple games down the stretch where he made big-time plays for us, whether it was an and-one or a big 3 or putting his body on the line to take charges.”

As far as current NBA players, Williams sees himself as a poor man’s Al Horford at this point.

Horford “has always been a dirty work player,” he told NCAA.com. “He does a lot of fundamentals, plays hard, gets rebounds. He doesn’t have the most exciting game to watch, but he always plays good. He just does his role and does it great.”