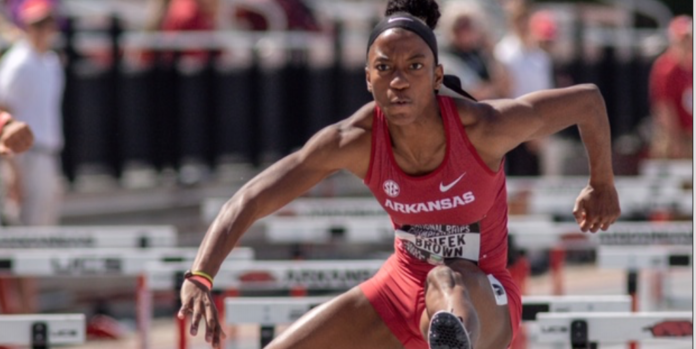 Nothing, so far, outshines the boffo performance the Jamaican native delivered Saturday at the NCAA National Championships for women’s outdoor track and field in Austin, Texas.

But one special Razorback changed all that.

Brown’s performances helped Arkansas build up 56 points, which put the Razorbacks in a tie with USC heading into the 4×400-meter relay, the final event of the night.

But USC’s runner ran into an Alabama runner and dropped the baton coming around a curve. So, the Trojans didn’t even finish the race. Below check out a stumble and fumble which, for once, helped Arkansas win a national championship at the 4:31 mark:

On that third leg, during the fateful collision, Springdale native Payton Chadwick kept Arkansas out of a potential disaster by evading the Alabama and USC runners. Chadwick swung wide, and handed off to the 400-meter All-American Campbell who split a 49.79 – the fastest leg of any relay in the final – to surge Arkansas from fourth-place to runner-up. The quartet ran the second-fastest time in program history. Their 3:25.89 time was a mere three-tenths (.30) of a second behind the National Champion relay team from Texas A&M.

In the end, the Razorbacks won its 45th national title in the UA’s track & field program history by scoring 64 points to No. 2 USC’s 57. This is the fourth team title in Arkansas outdoor track and field women’s history.

This 21-year-old is a superstar in the making.

She has a strong chance of representing Jamaica in upcoming Olympic Games.

Here are some of the things Brown did as a freshman in 2018:

Arkansas’ national championship day started with the 4×100-meter relay of Tamara Kuykendall, Payton Chadwick, Janeek Brown, and Kiara Parker. They killed it, recording the second-fastest time in program history with a 42.79. That trails only the school record run they pieced together in the prelims of 42.65 in the semifinals.

Devin Clark turned in an All-American performance in the 3,000-meter steeplechase, finishing seventh in the final running 9:55.22. Clark ran with the front pack for most of the race before falling off the pace over the final 800-meters where she settled in for her All-American finish.

Kiara Parker ran a 11.02 in the 100-meter final,, breaking the program record in the 100-meters by shaving off two one-hundredths of a second from Jada Baylark’s 2018 record. Still, in such a packed field, it was good only fifth-place. LSU’s Sha’Carri Richardson took the event in a collegiate record time of 10.75.

Kethlin Campbell grabbed a fourth-place finish in the 400-meters with a brisk run of 51.09 seconds. The sophomore transfer from Duke capped her first season in Fayetteville having earned First-Team honors at both the NCAA Indoor Championships and the Outdoor NCAA Championships while moving herself to No. 4 all-time at Arkansas in the 400-meters with a lifetime-best of 51.03 and running key legs on both the indoor and outdoor mile relays.

– by Evin Demirel, author of “African-American Athletes in Arkansas,” and a Razorback Communications press release.

US Sports Expressions That Have Permeated Mainstream Culture