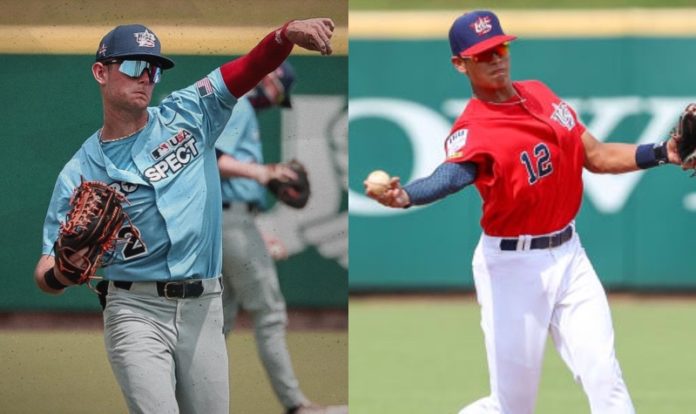 It’s easy to keep track of the current Arkansas baseball players who hear their name called during the MLB Draft, but they aren’t the only players Dave Van Horn and his staff are following.

The Razorbacks’ 2022 recruiting class, which is ranked fifth nationally by Perfect Game, features 17 players from the high school ranks and 10 from the junior college ranks. All of those players — as well as four of the six transfers they’ve landed from the portal — are eligible for the draft and could sign professionally before ever stepping foot on campus.

With a 2023 roster that’s in limbo, the trick is to figure out which players will actually make it through the draft and to Fayetteville.

“We’re doing as much as we can to try to find out what these guys are really thinking,” Van Horn said. “I truly believe some of these kids — and they’re talking to some of these pro people now — they’re trying to figure out, are they really going to get the amount that they want?

“And then if they don’t, we just want them to stay strong. If they say they want a million dollars, and they’re being told we can’t give you more than $500,000, then they should come to school and triple that.”

New rules that allow college athletes to profit from their Name, Image and Likeness (NIL) could lead to players making some of that money at Arkansas, but Van Horn is particularly confident in his staff’s ability to develop them to a point where they receive even more money two or three years down the road.

That is leading to more top prospects heading to college than ever before. In fact, Arkansas just benefited from such a move last year, as Peyton Stovall likely turned down $2 million to play for the Razorbacks. As a freshman, he started at first base and was a key part of Arkansas’ run to the College World Series.

Here’s a look at the Arkansas signees most likely to hear their name called when the 2022 MLB Draft begins on Sunday.

Ranked the No. 86 overall recruit in the 2022 class by Perfect Game, Mason Neville was a late addition to the class. While most top baseball players commit when they’re in 10th, or even ninth, grade, he flipped his commitment from Arizona to Arkansas in September of his senior year, just a couple of months before signing day.

The Las Vegas native is extremely athletic and, according to MLB Pipeline, “reminds some of a young Cody Bellinger.” He’s a true center fielder and would have a shot at starting in Arkansas’ outfield from Day 1, but professional scouts love his potential. He could very well get drafted based on his tools, even if his bat isn’t quite where it needs to be yet.

The Razorbacks probably hope he pulls a Stovall-like move by turning down the money and coming to school, but a source indicates that’s a longshot. If he’s taken in the 91-115 range where The Athletic, MLB Pipeline and ESPN rank him, Neville would have a slot value of $527,800-$680,100. Plus, as a high schooler, he’d likely command an over-slot signing bonus because it typically takes more money for professional teams to lure them away from college.

When he committed to the Razorbacks back in the summer of 2020, Jayson Jones was widely considered a top-10 prospect in the class and many believed he’d never step foot on campus. However, things appear to be trending toward him being in Fayetteville this fall.

A source indicated to Best of Arkansas Sports that Jones would almost certainly end up in school and Van Horn sounded optimistic when meeting with the media earlier this month.

“Jayson is a guy that a year ago sitting here, I would’ve said that it’s going to be really tough to get him to school,” Van Horn said. “He came to his visit in September, absolutely loved it, loved the feeling. I think he relaxed a little bit. I think if he comes to school here, he’ll have a lot of success.”

Of course, it’s worth noting the reason for that shift in perception is because of his play on the field. Although he has some of the best raw power in the class, as evidenced by his impressive batting practice session at the MLB Draft Combine last month, Jones also struggles with a lot of swing-and-miss against good competition.

On top of that, he’s gained weight – about 30 pounds, according to a source – and doesn’t appear to be a shortstop at the next level, whether that’s in college or the pros. He still has a strong arm and could end up at third, but corner outfield and first base are also possibilities, which hurts his value when it comes to the draft.

Once a first-round prospect destined for a signing bonus in the $3 million range, Jones is now looking at slot values between $250,000-$500,000 as a fourth-, fifth- or sixth-round pick if he doesn’t come to school.

Another victim of the injury bug that’s plagued top pitching prospects in this draft, Cole Phillips shot up draft boards when he touched 100 mph earlier this year before going down with an elbow injury that required Tommy John surgery. His fastball is still “in the discussion” for the best in the draft, though, according to MLB Pipeline.

The Boern, Texas, product flipped his commitment from Baylor to Arkansas last September. A source said he originally planned to move into his Fayetteville dorm along with several other signees earlier this month, but that never materialized.

That is probably not a good sign for the Razorbacks, but it’s also understandable given the potential money at play. If he goes in the 62-66 range, where he’s ranked by MLB Pipeline, The Athletic and ESPN, Phillips would likely be looking at a seven-figure signing bonus.

The high school signees listed above are Arkansas’ three top-100 recruits in the class, according to Perfect Game. None of the others are considered significant draft risks, but that doesn’t mean one of them couldn’t pop up at some point over the 20 rounds.

Infielder Easton Swofford, an in-state product from Bee Branch, and left-hander Parker Coil from Oklahoma are two of the better draft prospects, but they are already on campus and aren’t expected to sign professionally. A couple of others to monitor include right-handers Cooper Dossett, Ben Bybee and Christian Foutch, who were included on Prospect Live’s top-400 list.

Easily the biggest draft risk among the 10 junior college signees, Coll would very likely start somewhere on the infield, potentially shortstop, for the Razorbacks next year if he makes it to campus. Right now, the general feeling among sources is that it’s a toss-up.

Coming off a strong 2021 campaign in which he held opponents to a .133 batting average and had a 2.84 ERA with 78 strikeouts in 50 1/3 innings, Julian Bosnic was widely considered a top-250 prospect going into last year’s draft. The left-hander did get drafted in the 16th round, but opted to return to South Carolina with a chance to be in its weekend rotation.

Unfortunately for him, he never pitched for the Gamecocks again. A flexor strain in his elbow eventually required season-ending surgery. That injury is believed to have scared off pro teams, meaning he’ll likely pitch for Arkansas next season after entering the portal and committing to the Razorbacks.

Likely the top transfer to publicly commit to Arkansas so far this offseason, Jordan Sprinkle would be an ideal replacement for Battles at shortstop. According to MLB Pipeline, he’s “in the discussion” as the best defender in the draft and, before the season, CBS Sports’ R.J. Anderson wrote that “one evaluator called him the best shortstop defender in the class, and another threw a 70 grade on his footspeed.”

The problem is that there’s a good chance Sprinkle doesn’t make it to campus, but nothing is certain at the moment. Coming off a tremendous season in 2021 at UC-Santa Barbara, he was viewed as a potential first-round pick.

However, he hit a bit of a sophomore slump, as he went from slashing .353/.402/.536 last year to hitting .285/.381/.416 this year. Because of the dip in production, various outlets have widely varying opinions of where he slots in among this year’s prospects.

One line of thinking is that a solid year in the SEC would shoot him back up draft boards, and one source said Sprinkle “seems like an ambitious kid who is willing to bet on himself,” but — as seen with guys like Moore, Slavens and Bosnic — another year could have the opposite effect.

Curious where Arkansas’ current players might get picked and which of them might return to school? We’ve got you covered there, too:

The first day of the draft consists of the first two rounds, followed by Rounds 2-10 on the second day and finally Rounds 11-20 on the third day.

What to Know About the MLB Draft

Traditionally a 40-round event, the MLB Draft has been permanently shortened to 20 rounds, the same length as last year.

The MLB Draft is not as straightforward as its counterparts in the NFL and NBA. In addition to making selections based on merit, teams have to consider each player’s “signability” – how likely he is to sign a professional contract.

High school and junior college prospects can choose to honor their commitments and college players, assuming they have remaining eligibility, can return to school if they don’t receive their desired signing bonus.

In 2012, a new wrinkle was introduced to the draft: slot values and bonus pools. Each pick in the top 10 rounds is assigned a recommended signing bonus amount – or slot value – with teams being allowed to spend up to the combined value of their top-10 round picks’ slot values – or bonus pool.

Players selected in the 11th round and beyond can receive signing bonuses up to $125,000 before it factors into the equation, with the excess counting toward the bonus pool. The signing deadline is Aug. 1.

If a team does not sign a player taken in the first 10 rounds, it loses that pick’s slot value from its bonus pool. That is why it’s rare for teams not to sign their early draftees, especially those with seven-figure slot values.

Last year, only three of 312 players taken in the top 10 rounds did not sign. Two years ago, all 160 players in the five-round draft ultimately signed. The year before that, just two of 317 chose not to sign.

For more on the Razorbacks and MLB Draft, see this:

The MLB Draft is just one aspect of constructing the Razorbacks’ 2023 baseball roster. Check out our three-part series detailing the challenges Van Horn faces in doing just that: