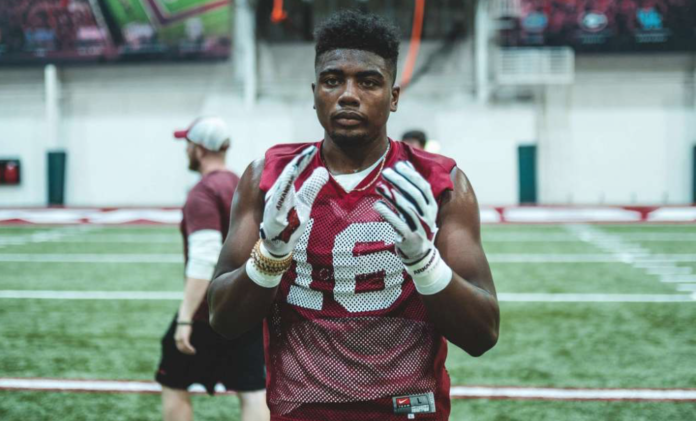 Over the course of this season, Treylon Burks may come up short a few times on third and long, but he’ll never come up short on confidence.

The talented freshman wide receiver believes the Razorback offense is set to detonate against Ole Miss’ experienced secondary this Saturday. “They’re pretty good, but I feel like we’re gonna dominate,” Burks said in his first press conference interview as a Hog. “Just being honest with you.”

Burks, a Warren native, will have plenty of opportunity to back up his Arkansas-Ole Miss football prediction. He’s already established himself as a go-to receiver after catching three passes for 52 yards in the season opener. He also serves as the Hogs’ primary punt returner.

Trey Knox, Burks’ receiver teammate, is equally confident. I think we’re going to put up a lot of points in this game,” Knox said. “After watching last week’s game [Ole Miss’ 10-15 loss to Memphis] I feel like we can really go in there and dominate on the offensive side of the ball.”

Others aren’t so optimistic.

Take College Football News’ Pete Fiutak, who wrote the below about Arkansas-Ole Miss:

“Expect the Ole Miss offense to be just a wee bit stronger after last week’s disaster, with more downfield passing and a bigger game from RB Scottie Phillips.

At home, the Rebel defense will be a wee bit stronger, especially in the secondary. The Arkansas O that’s still getting used to a wholesale change of starters isn’t going to be sharp or clutch enough.”

Fiutak predicts Ole Miss 28, Arkansas 20 with a “confidence rating” of 2 out of 5. This aligns with Vegas’ prevailing line of Ole Miss as a seven-point favorite at home.

Then there’s Odds Shark, the major online betting site that apparently hates Arkansas. Last week, Odds Shark predicted FCS -level Portland State would upset Arkansas. Granted, the game was a lot closer than many expected, but that was still a brazen call.

This week, Odds Shark has Ole Miss nearly doubling up on the Hogs:

Given that the last four games of Arkansas-Ole Miss have been razor shave close, and that this series features the Hunter Heave and a seven-overtime game, a blowout very well could be in the cards. Or another nail-biter. This series, after all, is the very definition of unpredictable.

Regardless, I believe the Razorbacks’ offense will better on the road for three big reasons — starting with Cheyenne O’Grady’s return.I break it all down in my OnlyInArk.com column this week.

For more Hogs insight, make sure to check out my following post: