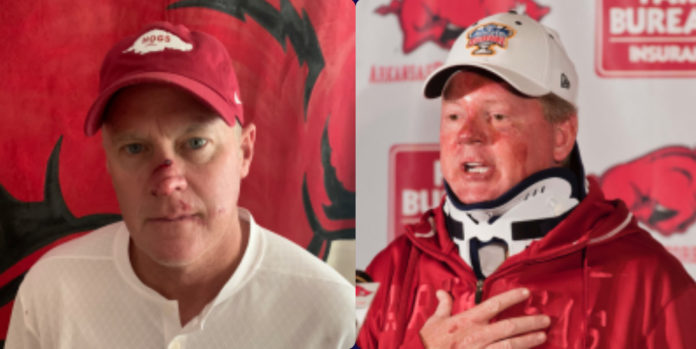 In less than three years, Hunter Yurachek has developed into one of the most beloved athletic directors in Razorback history.

He’s presided over an era in which almost all sports except football are producing Top 25 caliber teams. Programs like men’s basketball, baseball and soccer are even on the cusp of winning national titles.

While the football program isn’t yet Top 25 caliber, it’s on an upward trend and on the cusp of breaking into that realm by winning its first games against Rice and Texas this season.

He’s hiring really good coaches — from Jordyn Wieber in gymnastics, to Eric Musselman in basketball and Sam Pittman in football — and he’s keeping the good ones Arkansas has. Musselman has cited his relationship with Yurachek as a big reason for signing his recent extension.

And, no doubt, Dave Van Horn’s faith in Yurachek and the support Yurachek has shown for the baseball program is a big reason that Van Horn recently signed an extension through 2021.

Yurachek was already on good ground with most of the Razorback fanbase. But with a few choice words this weekend, he sent his popularity soaring to a whole new level.

During the Razorbacks’ scrimmage on Saturday, Yurachek was standing on the sideline when running back Josh Oglesby got knocked out of bounds in his direction, heels over head:

Oglesby’s cleats hit Yurachek on the rose. The result: a knarly cut that immediately went viral on Twitter.

Yurachek, however, made light of the whole situation, Tweeting out: “A big thank you to Coach Pittman for sharing video from today’s scrimmage to validate I was indeed at the scrimmage and not on a motorcycle.”

You may want to back up from the stove, because that’s a direct burn on Bobby Petrino, the former Razorback coach who found himself on the wrong end of the most infamous motorcyle accident in college football history.

The fact that Yurachek is able to joke about this nearly a decade after the incident, a time span in which Razorback football has sunk to the bottom of the SEC, says how willing he is to mix it up and show some feistiness.

A few fans weren’t feeling it, though.

“‘Forgive and forget’ means something down here. For the faithful, you could even call it a ‘directive.'”

“I’m all in on how you’re doing your job, but when your response to getting kicked in the face is to kick someone else, I’m going to call you on it.”

“Shut up. Rebuild and win some games. Petrino was great and got screwed by the moral police. It has nothing to do with the current regime. You are bringing yourself down by acknowledging social media riffs.”

And then there was Chris Glidewell, who Tweeted: “Pretty classless tweet from life long Razorback fan IMO.”

“Get to the Sugar Bowl and win a Cotton Bowl before you rip previous coaches. Even then show some maturity and class.”

Most Razorback fans, however, were in strong disagreement with these three.

They loved Yurachek’s cheekiness here, and showed it in a number of ways on social media. Here are the top 10:

One can never go wrong with a little Fred Savage meme action.

“Good to see you are taking through notes on how to use Twitter from @EricPMusselman! The best follow in college sports!”

But I can sure get behind this sentiment:

And, finally, to wrap it up, let’s not forget the man who helped Arkansas get into the football mess it’s in now with the hiring of John L. Smith and then Bret Bielema: Jeff Long.

“From a group that we were very concerned about as far as depth and starters and all that, it’s kind of taking shape a little bit,” Pittman said. “Those guys got after the quarterback, and a lot of times they were in a 3-man rush.”

“Mo Brown had a corner blitz and hit the running back and knocked the ball loose,” Pittman said. “It was a great disguise. We work on it all the time. Great disguise. Really good, physical hit.”