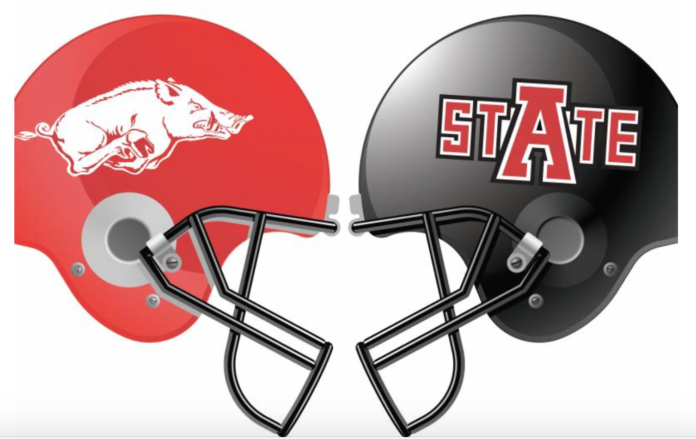 The Razorbacks and Red Wolves, the two largest football programs in the state of Arkansas, have never played against each other. But Hunter Yurachek and Terry Mohajir, the schools’ two athletic directors, had been discussing such a game for more than two years when today they announced the game would be played for the first time on September 6, 2025.

For decades, fans on both sides had been clamoring for the match-up but that wasn’t the reason the Razorbacks finally agreed to it, Arkansas athletic director Hunter Yurachek said.

The biggest reason was that, when the 2021 Arkansas football schedule was being finalized, Hogs head coach Sam Pittman didn’t like that Fayetteville would host only two SEC home games. Only two home games not only hurts from a revenue standpoint, but also limits the ability to host recruits for on-campus visits.

Missouri, specifically, was on the slate as Arkansas’ 2021 opponent in Little Rock, but Yurachek wanted to see if that could moved back to Fayetteville.

So he contacted Stacy Hurst, secretary of the Arkansas Department of Parks, Heritage and Tourism which now supervises War Memorial Stadium.

What had been informal talks gathered steam in January. She and others involved with War Memorial Stadium were open moving the Missouri game, but in return wanted “meaningful games” if the Arkansas football program was going to keep playing in Little Rock.

In this context, “meaningful games” meant games against in-state competition. That would include not only the recently announced A-State match up, but perhaps potential future match ups with UCA and two previously scheduled games with UAPB.

UAPB (University of Arkansas at Pine Bluff) was originally scheduled to play in Fayetteville in 2021 and 2024 but its athletic director Chris Peterson rearranged for those to be played at War Memorial Stadium instead.

Yurachek thanked Peterson and Mohajir during today’s press conference.
“When I reached out to [Mohajir] a few weeks back, he had a game in 2025 vs Texas A&M that was under contract that he had to work to move.”

Here’s how the next four seasons line up when it comes to non-conference Razorback football games:

As to whether Arkansas will play Arkansas State beyond 2025, Yurachek didn’t commit to that but seemed open to the possibility. It appears to be a wait-and-see situation for now. It’s important to note Yurachek, Pittman and other UA athletic brass see Arkansas State as just another Sun Belt opponent (while acknowledging how much more some native Arkansans care about it). Since Arkansas doesn’t play any Sun Belt annually, but rather once every few years, it’s safe to assume that Arkansas State-Arkansas won’t be an annual game. Perhaps once every three years at the most.

Yurachek was also asked about whether Arkansas would keep playing games in Little Rock beyond 2025.

Yurachek also went out of his way to thank the support of the University of Arkansas Board of Trustees, UA Chancellor Joseph Steinmetz and Arkansas Governor Asa Hutchinson for supporting Arkansas vs. Arkansas State in football.

Yurachek said most boosters, trustees and other power brokers supported the decision, but some did voice disagreements. Still, that disagreement wasn’t “to the point where they wanted to put their foot down and say, ‘This can’t absolutely cannot happen.’ Yes. There were people that disagreed with me about was this the right decision, but nobody felt strong enough in their conviction about this that they were going to make sure it didn’t happen.”

Arkansas could potentially lose in-state recruits down the line even if they win future games to Arkansas State.

“Let’s say you play them three times in six or seven years, every other year, whatever you do, let’s say you went all three of those games and you blow them out,” said Mike Irwin, analyst for Pig Trail Nation.

“Some kids growing up in this state are people who will always identify with the underdog and they might watch that game and go “Arkansas State, they lose but I want to help them win. I’m from Northeast Arkansas. I’m closer to that. I just want to stay there.’ So it could affect recruiting somewhat” given Arkansas never would have lost that recruit had the games not been scheduled.

For more on folks involved with Arkansas and Arkansas State, see this:

More background on Arkansas-Arkansas State is in the below post from June, 2020:

Arkansas athletic director Hunter Yurachek has told Arkansas’ head coaches they are free to schedule UCA and A-State in all sports — except football.

This comes a year after the Razorbacks began to schedule (and play) football and basketball games against the likes of UALR and UAPB.

Economics in the wake of the coronavirus pandemic is the main reason for this latest announcement, Yurachek added.

Instead of traveling out of state for opponents, why not keep it in state for cheaper travel fares? “As we look at trying to eliminate the majority, if not all, of our commercial flights for our team travel in the fall, I think there are some other schools around the state that are trying to do some things of that nature,” Yurachek said, according to the Arkansas Democrat-Gazette. “So this just provides two more [scheduling] opportunities for our coaches.”

Going by bus pads the pocket, and cuts down potential exposure COVID-19 for players.

“We’ve asked our coaches just to try to do their best to schedule competitions where a commercial flight is not necessary,” he said. “Whether that’s changing the schedule or changing the way they travel.”

After the announcement, Phil Elson, the award-winning broadcaster of Razorback baseball and women’s basketball chimed in:

Arkansas is now allowed to schedule Arkansas State and UCA in non-football sports in a policy change from Hunter Yurachek. It’s long overdue. I think they’ll play football near the end of the 2020s. What do you think?

Given how inevitable the UA-A-State game seems now, why not sooner?

“We’re scheduled out in football for the next five or six years,” Yurachek said. “So there’s no discussions going on with either [ASU or UCA] about football scheduling at this point.”

“They Should Be Begging Us To Play”: Terry Mohajir on Razorbacks vs. Red Wolves

Right now, all talks are informal. The two men are friends, and chat here and there about the possibility. Mohajir has proposed to Yurachek a couple of potential available dates for A-State in the early 2020s. “He also proposed some monetary figures for what he would be comfortable with in terms of a game guarantee paid by the UA to A-State,” Yurachek told me for an Arkansas Money & Politics article. But the UA, which has already finalized most of its schedule through the 2024 season (and is finalizing contracts with some opponents in the 2025, 2026 and 2027 seasons) hasn’t yet scheduled Arkansas State in football.

Terry Mohajir thinks it’s in the Hogs’ best interest to play Arkansas State as one of its regular Sun Belt foes. “They should be begging us to play,” he said. Given Arkansas State’s rise to mid-major power — it’s No. 6 in Group of Five schools in total wins since 2011 — a non-conference win over the program could help Arkansas more than most other G5 wins. As Mohajir sees it, “If you’re going to play a Group of Five school, why wouldn’t you play one that’s going to help your brand?”

Arkansas is coming off its worst-ever season, a 2018 debacle that resulted in only two wins. At this point, any win is a good win for the Razorback program. The Hogs’ program is years away from seriously contending for an SEC title, and Vegas backs up the pessimism. Betting experts put the Razorbacks’ odds as tied with Vanderbit for the least likely SEC champion for 2019.

It’s true that Arkansas State is at the height of its Division I era.  But Yurachek isn’t sure about the value of a win against the Red Wolves vs. other top opponents from the Sun Belt. “I don’t know whether they give you a better opportunity to get into the College Football Playoffs mix instead of one of their Sun Belt counterparts. Maybe Terry can give me some information on that after he serves a term on the CFP committee.”

If Mohajir gives a strong enough case, that may help push Razorbacks-Red Wolves from possibility to reality.

Below is the only time the Red Wolves and Razorbacks have ever played in men’s basketball:

In football, baseball and basketball, the Hogs have played 41 times against in-state opponents. Click below for details on what happened in each of those games: