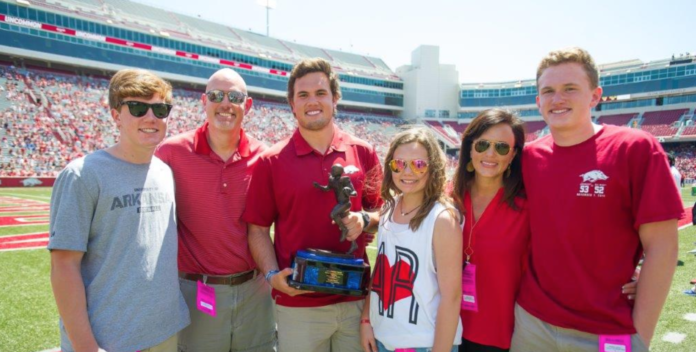 It’s safe to say that Arkansas has not produced a lot of really good teams in recent years, but we have produced some really good players  — specifically at the tight end position.  Hunter Henry is first among them and now at $10,607,000 on a one-year deal, Henry is the highest paid tight end in the NFL.

We all remember Henry’s throw back to Alex Collins against Ole Miss, which seemed like the most brilliant, if not one of the luckiest, plays in recent memory.

Had it not worked it could have been seen as one of the dumbest.  But that’s not what happened.

Make no mistake, Hunter Henry was one of the best tight ends to ever play at Arkansas.  Was he the best, though?

CJ O’Grady holds the all-time record for touchdowns by a tight end at 12.  Hunter Henry, however, never quit the team in mid-season like O’Grady did.

Jeremy Sprinkle holds the record for most touchdowns in a game (3) and it was his record of 11 TD receptions that O’Grady broke for touchdowns by a tight end.

Let’s look at the numbers for recent standout tight ends:

These are all big numbers for any tight end in college football.

Granted, it might look like DJ Williams could give Henry a run for his money.  What we have to remember is that Henry only played for three years while Sprinkle, O’Grady and Williams amassed their numbers in four years.  We’ll never know what Henry would’ve done in a 4th year, but it stands to reason that he would have most certainly surpassed the yardage of Williams and probably stay ahead of the 12 TD record set by O’Grady.

Like Williams, Hunter Henry won the John Mackey Award and was a consensus All-American.  Neither Sprinkle or O’Grady can claim those.  As good as Sprinkle and O’Grady were, if you wanted to put them in tiers they would play second fiddle to both Henry and Williams.

In Henry’s four years in the NFL, he’s missed an entire season and has yet to play a full 16-game season.  Still, he’s caught 17 touchdowns and has 1,709 receiving yards.

When he came back during the 2019 season after missing all of 2018, he was No. 8 in receiving yards per game.  And only three tight ends had more touchdowns than the five he had:

SHOW ME THE MONEY:

All of this begs the question:  Why is he the highest paid tight-end in the league?  There are seven tight ends who have better stats, including three with more touchdowns.

Listening to him be interviewed on the Buzz 103.7 last week would make any Hog fan proud.  He’s a typical Arkansan, friendly and unassuming — nothing like the brash, loudmouthed Rob Gronkowski.

Gronkowski, who just came out of retirement to rejoin Tom Brady in Tampa Bay, is clearly one of the best tight ends in the history of the game. He’s also a self-aggrandizing jock who throws party boat bashes that would make Caligula blush and does crap like this:

Gronkowski’s current contract, for which he has a single year remaining, has him making $10 million for the 2020 season — just under Henry. Looking ahead, beyond 2020, Henry said he would never hold out for a larger contract. Sure, that’s a little easier to say when you’re about to be the highest paid player at your position in the league for at least one year.  Still, there’s not a hint of egotism in his voice.

Hunter Henry’s dad, Mark, played for the Hogs, while Hunter has two little brothers — Hayden Henry and Hudson Henry — play for the Hogs right now.  The latter chose the Hogs over Stanford.

These people are loyal.  And loyalty to your organization goes a long way in the locker room.  It can dampen any potential team dissension and ultimately mean the difference between being a good team and being a championship team.

I believe the Chargers see in Henry is not only immense talent, but character.  That’s a good combination any team would want.  Plus, given longtime Chargers quarterback Phillip Rivers is no longer around, it has to be comforting for a new QB to have someone as reliable as Henry.

For more on Razorbacks, check out the latest: