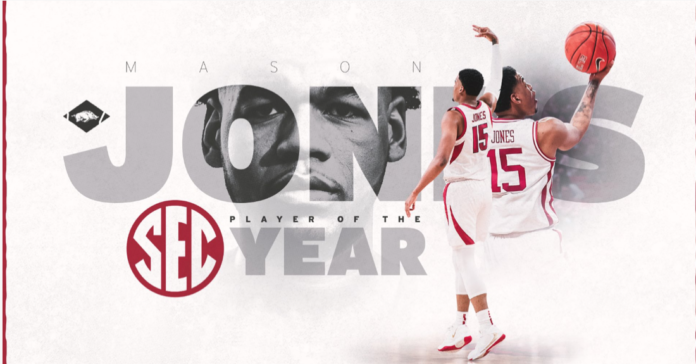 University of Arkansas junior Mason Jones is a theater arts and communication major who dreams of one day becoming an actor on par with Denzel Washington.

That acting career will need to take a raincheck, though.

Mason Jones’ basketball future is looking increasingly bright, especially after winning the highest individual honor of his career so far: SEC Co-Player of the Year.

This is the fourth time a Hog has been named SEC Player of the Year, joining Bobby Portis (consensus in 2015) and Corliss Williamson (consensus 1994 and 1995).

Jones was especially devastating scoring the ball this season, challenging or breaking some of Todd Day’s scoring records.

“I feel like this is what my team needs — for me to go out there and be a killer. We might be small and we might be limited on depth, but we play hard, we play strong and we give it all we got every game,” Jones told Bo Mattingly.

As well as Jones has played this year, “I know for me to get to the level I want to get to, this is not good enough,” he added.

His great bounce back continues.

Jones had been great in fifth grade, one of the top-ranked players in the nation for that age group as he regularly locked horns with the likes of Jayson Tatum.

But, starting in sixth grade, “I just lost myself, lost my body.” Jones put on too many pounds. “I hit a path where I didn’t know what I was doing. I really just gave up on basketball, knowing the expectations [created] by my siblings were too high.”

Mason Jones was too overweight to play high school basketball in ninth through eleventh grades. Instead, in seventh and eighth grades, he played as a center on his football team.

Basketball was relegated to pickup games during PE. “I was there, just a fat, chubby kid, jacking up threes and having fun,” he told Mattingly. He didn’t feel compelled to ball more seriously than that.

Through it all, his friends and family stuck by his side. If he didn’t want to keep playing basketball, so be it. They would have his back no matter what.

“That was the big moment in my life right there, just knowing that they were supporting me, but not making my decisions for me in life.”

His brother, Matt, was especially helpful. Mason Jones confessed to him that he was tired of being known as a little brother — “that was the worst pet peeve of my life.”

A flip had switched for Jones. He was ready to lose enough weight to play school ball — to put in the hours needed to get into the gym and eat healthier.

His parents helped push him to lose weight. His friends did, too, sometimes picking him up and driving him to a local track to run.

He didn’t turn it around enough then to even do the wind sprints to make the DeSoto High (Texas) team, which his brother had played for. Instead, he played for Top 100 Academy, but he had to start on the JV. Even though he didn’t start as a senior, Jones had done enough to show that a U-turn in his career and life was underway.

Even though the journey upward had just begun, he’d made his people proud. So much of what Mason Jones has come through since fifth grade “has been nothing but adversity,” but he doesn’t see that as a negative. Adversity is “still gonna come, but how do you handle it?”

“I approach these things like ‘God, what is the reason for this? How do you see it? Is this a humbling experience?”

Although Jones has done great things so far in his two seasons as an Arkansas Razorback, “there’s still more to the journey. I’m nowhere near where I could be right now.”

“I haven’t peaked yet. I feel like I’m still behind in some things, because I started late. But trust me, I’m learning real quick — and the more I learn, the more I’m gonna get better.”

Mason Jones is already really good. The proof’s in the record book: