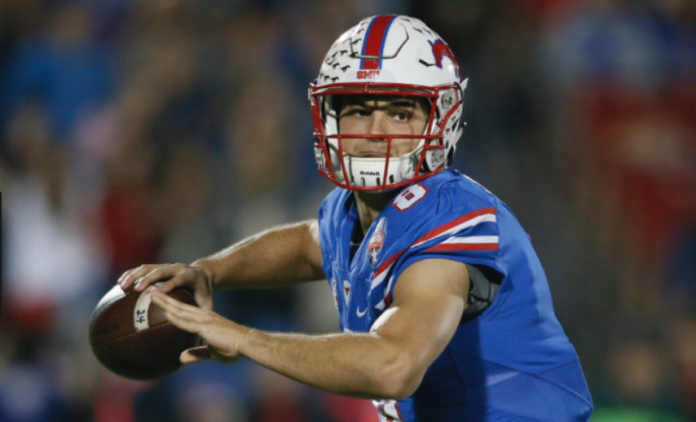 UPDATED: Granted, it’s not set in granite that Ben Hicks will be Arkansas’ starter this season.

Yes, there’s a chance grad transfer Nick Starkel will arrive this week from College Station and begin to lay siege on the job. And sure, incoming freshman KJ Jefferson could floor coaches as a dual-threat phenom this summer and take over within months. There’s the outside chance a returnee like Connor Noland comes on strong, too, though that seems less likely given the way Noland is tearing it up the baseball team these days.

So Hicks, bar none, is the frontrunner for the starting position despite arriving in Fayetteville just this year. With three full seasons under his belt at SMU, he’s by far the most experienced quarterback on campus. Two of them came while working with current Arkansas coaches Chad Morris, Joe Craddock and Justin Stepp.

Nash told Stepp he was impressed with Hicks’ deep knowledge of Morris’ system. “He was like, ‘[Hicks] started telling me stuff that I ain’t even heard of before,'” Stepp said. “Poor Shemar’s head’s going to be swimming.”

Hog fans got to see some of this up close and personal in Arkansas’ Red-Whte scrimmage in early April. Hicks was simply steady, completing 8 of 18 passes with one touchdown and no interceptions.

Afterward, Chad Morris had this to say:

“I think if you talk to those defensive players than they’ll probably talk a lot about Ben and the respect that he’s gained by coming in here and going to work. I think the next thing that he’s really provided is taking that quarterback room and improving the guys that are in it. I think you saw John Stephen [Jones] having a really good spring. He and Ben have really meshed well. Jack Lindsey’s another one that has really done some nice things for us. Daulton as well. Just having Ben here and the knowledge of what we’re asking and what we want, what the culture is about, has helped our entire football team.”

Tyler Wilson On Ben Hicks and the Arkansas Offense

In the following days, former Razorback great Tyler Wilson shared his thoughts on the Arkansas quarterbacks’ performance on the sports radio show “Hit That Line.”

“Obviously it’s still a work in progress, and I think that’s the biggest thing. This coaching staff is continuing to figure out ways to get balls in playmakers’ hands and see some explosive things from some young players. The Ben Hicks kid — I was impressed. I thought his arm strength … Now, was he perfect? The answer is no. And was he everything that you hope your starting quarterback will be? And the answer is no. But I think he has potential to continue to get better. “

“[Ben Hicks] looked more comfortable at the quarterback position than I’ve seen anybody in Chad Morris’s offense here at Arkansas. Which is not saying a whole lot, but he looked more comfortable. And you could tell he was familiar with running that system, and running that offense. He’s only been here roughly a month or just under that. He’s acclimated to the system very, very well, and will continue to get better. “

The one thing we really didn’t get to see because of the nature of a spring practice and a red white game is the full running package with the quarterback. What could you really tell with that element missing?”

-Tyler Wilson on “Hit That Line”

With Ben Hicks, “there’s no price you can put on having a guy that’s been through as much as he’s been through, especially in this offense and in this system,” Stepp added. “He knows it inside and out and as a coach, man, this is so much easier for me, man. When I get 15 receivers out there, I don’t have to worry about coaching every single one of them. Ben can coach them, you know? I can take these two over here and coach them up and Ben can get the other guys right.”

Stepp isn’t the only coach praising Hicks so far.

Offensive coordinator Joe Craddock also weighed in. He said some of the returning Razorbacks were at first “kind of standoffish” but Ben Hicks’ work ethic and competitive drive helped them warm up. Now, the “players flock to him.”

Craddock continued: “At first he’s trying to drag guys out and get them going. So at first there it was a little tougher for him than it is now being around for a couple of months around the guys really getting to know them on and off the field.  He’s really challenged himself to learn their names and learn something about each player and know where they are from and those types of things. So I think the players are taking him in very well.”

Craddock also provided updates on the other Razorback quarterbacks:

“To see those guys in the mat drills and running and those things they are leading. They are up front and doing the things they are supposed to do in the offseason. With them we are looking for development. Doing the things we’ve taught them before and being better at those things and not having to be re-coached over and over on certain things and really understanding what we’re trying to do in our offense.”

“We have to do a really good job since he is a pitcher and doing those type of things being very cognizant with his arm of that. Make sure we don’t overuse him. I went to his first start and it looks like he’s going to be a dude over there on the weekends for those guys in conference play. So as they go throughout their conference season we have to be really smart in how we approach things when we do have him and make sure we don’t overuse him.”

Whether Ben Hicks or someone else ends up with the majority of snaps in 2019, that Razorback quarterback will target significantly more dangerous receivers than what Arkansas had in 2018. Near the top of that list is Trey Knox. Check the below for an update on him:

And here’s a good update on the Arkansas freshman receivers in general: