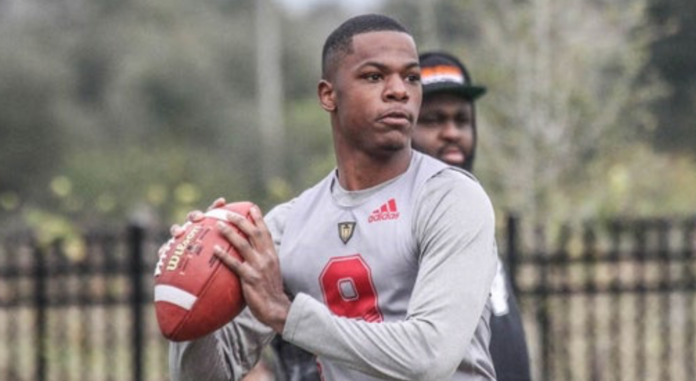 Many Arkansas fans have a bitter taste in their mouths when hearing the name Malik after losing Malik Monk to Kentucky as a “one-and-doner” in basketball.

Thanks to football, that is changing. Malik Hornsby, the nation’s 18th-ranked recruit who hadn’t yet signed before National Signing Day according to 247 Sports, made a splash by choosing the Hogs.   The 6’2″, 175 pound speedster from Missouri City, Texas is also the No. 8 dual threat QB in the country.

To fend off Baylor, Texas A&M, Purdue, North Carolina and more, our ace in the hole here was new Hogs offensive coordinator Kendal Briles.  They’ve known each other a long time and have a good relationship.  In Hornsby’s words:

“Me and Coach (Kendal) Briles have a good relationship and he thinks I can come in and be a great player in their offense. They have been trying to find a quarterback and they will let me compete for the job.”

Hornsby went more in depth with Hogs recruiting writer Otis Kirk: ““That relationship means a lot,” Hornsby said. “As everyone knows, Coach Briles has been recruiting me since I was a freshman and he was at UH. I’ve been the quarterback he’s wanted for the longest….”

When Baylor’s coach Matt Ruhle left for greener pastures it “threw everything up in the air,” he said. Indeed, Hornsby recently cancelled a trip to Baylor, which was a great sign for Arkansas:

CAN YOU SAY DUAL THREAT?

Who wouldn’t want a QB like Malik Hornsby?  The guy’s got the speed of a defensive back, but can also throw.  Pretty rare combo and one that fits in the Briles system.

Now, there are experts out there who think he needs to tighten up his throwing motion and gain some weight and strength.  There is some honing that may need to be done here.  But, get this:

That is absurdly good.  Most teams would be happy with a 52 to 20 ratio.  Enough said.

With all due respect to KJ Jefferson and Feleipe Franks, we need this guy.

There’s nothing wrong with having two dual threat quarterbacks on the same team.  Especially when it’s on a team whose offensive coordinator is Kendal Briles.

And Hornsby doesn’t appear fazed by competing against a graduate transfer. Franks coming aboard actually helps, Hornsby told Pig Trail Nation. “I want to come in and play. But if I don’t, if it’s not like that, I wouldn’t mind learning from him.”

Whether Hornsby can develop into a superstar college QB remains to be seen, but Kendal Briles has been around for a while and he can spot talent.

We’re blessed to have him.

These clips are impressive, y’all: