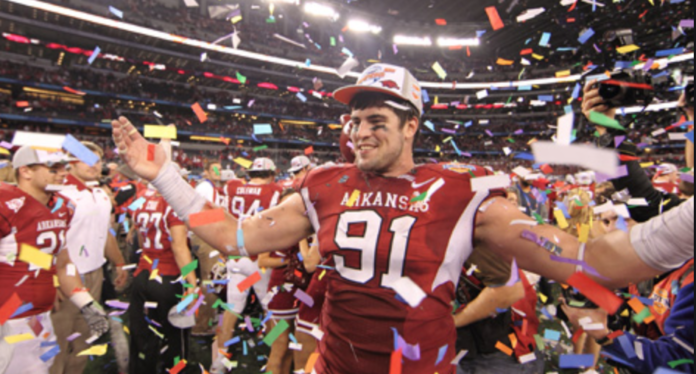 Little Rock native Jake Bequette is one of the most beloved players in recent Razorback history, a stalwart on the Bobby Petrino teams that signal the high point in Arkansas’ SEC history so far. While Bequette back then made his name on defense, nowadays some Hog fans are finding him mighty offensive.

Bequette, currently a first lieutenant with the U.S. Army 101st Airborne Division, is frustrated with how the U.S. presidential election is playing out. Days after the voting polls closed, the election process is still playing out as thousands of ballots in battleground states like Arizona, Georgia and Pennsylvania remain uncounted.

Bequette flung a social media grenade into the national discourse about the U.S. presidential election when he sent out the following Tweet:

This process is a dumpster fire, and we need a new Constitutional Amendment:

We require ID at the airport, the movies…but not at some state ballot boxes?

Here, the 31-year-old Bequette is referring to some of the issues around the record number of mail-in absentees ballots and early voting (upward to 45 days in advance in some key battleground states).

The millions of mail-in absentee ballots and early votes, far more than in any previous presidential election, are taking days to count and have left unresolved the status of Joe Biden and Donald Trump come late January 2021.

Bequette’s Tweet underscores yet another amazing low in this most depressing of years – the politicization of the decades-old election process itself.

While some Hog fans agree with Bequette, quite a few point out the simple fact that essentially mandated in-person voting is asinine in the face of a raging pandemic. They lay into him for proposing laws that would limit the number of Americans who can make their voices heard within a democracy:

Plus, Dillon Reed writes “Making it harder to vote is exactly contradictory to the premise of democracy. It’s why throughout history we’ve dismantled the obstacles to voting.”

And, finally, David Bear Mills adds: “Flying and going to the movies are privileges that some people can’t afford. Voting is a right that everyone should have equal access to. Ensuring accessibility is essential to providing this right to American citizens.”

Quick tangent: That accessibility, by the way, should also be provided to all SEC football fans. The lack of transparency on reviews of important plays — like the fumble at the end of Arkansas-Auburn — is appalling.

In a Trump-leaning state like Arkansas, the above Hog fans may sadly prove to be a minority. But at least we all can all agree on this:

Bequette spent four years with the New England Patriots before a year of law school and joining U.S. Army in the summer of 2017. “Playing for Bobby Petrino at Arkansas and then Bill Belichick at New England was great preparation for the United States Army,” he said on the Buzz 103. 7 FM. “They would have been great drill sergeants.”

After serving in Iraq, he’s now stationed in Fort Campbell, Kentucky with the 101st Airborne Division, which played a key role in storming the sands of Normandy during D-Day in World War II.

“I think it’s the best thing unit in the army,” Bequette said. “If you’ve seen the HBO series “Band of Brothers,” you know that’s our lineage – the Screaming Eagles. I couldn’t be prouder to have that screaming Eagle on my shoulder every day. It’s an amazing unit. I went through some really tough training [going from 270 to 230 pounds] , I went through officer candidate school, the entry officer course, and then ranger school. It’s been quite a journey.”

For more on that story, listen to his interview below. Here are some highlights:

5:40 – The Navy Seal who inspired him to go from the NFL to the military

12:16 – His year and half being locker neighbors with Aaron Hernandez, who would end up as a convicted murderer

13:29 – He speculates on who will thrive more after the Bill Belichick-Tom Brady split