Search
Home Arkansas Football Around the SEC Grant Morgan on How Arkansas is Scheming Against Quarterbacks “Mastermind” Jimbo Fisher... 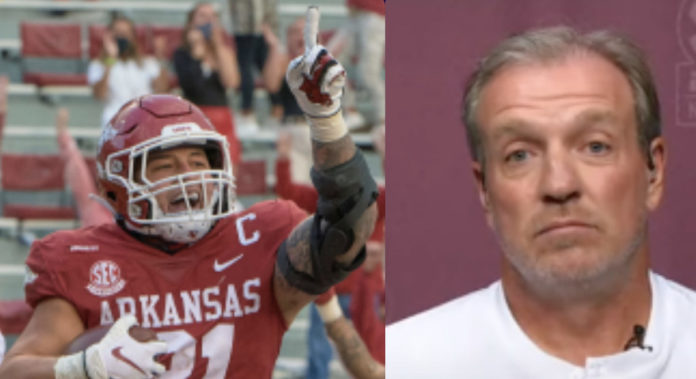 This weekend, Arkansas’ star linebackers will have their hands full against a Texas A&M backfield featuring a two-headed monster in tailbacks Isaiah Spiller and Devon Archane. Both Aggies are ripping off at least 6.3 yards a carry this season.

Calzada, who has taken over the Aggies’ starting spot for the injured Haynes King, looked mostly lost in the 10-7 win Texas A&M eked out against Colorado in Week 2.

But Calzada improved in Week 3 as the Aggies blew out New Mexico 34-0. He went for 275 yards, three touchdowns and an interception.

“He can throw the ball really well too,” Morgan said on the Buzz 103.7 FM. “That’s one thing with Coach Fisher, Jimbo Fisher, he’s a mastermind of quarterbacks.”

He’s sure to keep Arkansas and its defensive coordinator Barry Odom on their heels in a game in which the Aggies are favored by 5.5 points.

Grant Morgan told the Buzz 103.7 FM that Fisher is “going to going to get whoever they have ready to go. So, we’re expecting to see stuff that we haven’t seen before on film against them because that’s how coach Fisher is. He doesn’t like to do a lot of repeat stuff.”

“I think in the first three games that they’ve played, they’ve only had one route that’s been repeated. So we’re going to have to be able to play our defense and be able to go out there and do our job and focus on us. We’re excited for that.”

As expected, Fisher and the Aggies are publicly showing confidence in Zach Calzada’s ability to lead No. 7 Texas A&M against No. 16 Arkansas. Still, they have a lot to be concerned about.

In the third quarter against New Mexico, Calzada missed a wide-open Jalen Wydermyer on a pass that should have led to a touchdown.

On the very next drive, as SI.com’s Cole Thompson notes, “Calzada was under pressure and instead of throwing it out of bounds, he tried to force a ball to Moose Muhammad. New Mexico’s Tavian Combs jumped the route for an interception.”

In the last few years, Arkansas’ defense had trouble stopping former Aggie quarterback Kellen Mond at critical junctures in the game, but this year’s defense is deeper and stronger and will pin its ears back against a relatively inexperienced quarterback like Calzada.

“He makes you dot I’s and cross T’s. I mean, he’s a zone guy, he’s a man guy, he’s a blitz guy, he’s a three down guy, he’s a four down guy. The multiplicity of things makes you think as a play caller, but he also makes your kids think on the field because of how you have to set your system up.”

“I think he does a really good job of that.”

The chess match between Odom and Texas A&M’s coaches starts with who can force the other side to play in a reactive mode as opposed to a proactive one.

Odom has his players ready to force the issue.

“At the end of the day we have to focus on us, but because we’re in the SEC now,” Grant Morgan said.

“So we’ve got to continue to limit the explosive plays because they like to throw deep balls, or get deep runs.”

Here’s more from the Texas A&M head man on the big game:

Arkansas is “one of the few teams that have played very solidly all three games. They’re running the ball exceptionally well as you saw what they did in the Texas game and other games in which they played very good ground games.”

“Quarterback KJ Jefferson’s doing an outstanding job of getting the ball down. I mean, hitting so many big plays.”

“They’re playing in all three phases right now probably as well as anybody in the country.”

From 2009-2011 under Bobby Petrino, Arkansas annually beat the then Big 12 Aggies at A&T Stadium when the old Southwest Conference series was non-conference renewed as the Southwest Classic.

Not coincidentally, A&M romped 58-10. A&M started a 9-0 streak in the annual Hogs vs. Aggies SEC West game though most have been close.

Three of Bielema’s games vs. A&M went to overtime, one with a controversial “tripping” call against Arkansas offensive lineman Dan Skipper figuring pivotally,  Even Chad Morris’ Razorbacks played the Aggies close, 24-17 and 31-27.

Last year’s 42-31 loss certainly is no Arkansas embarrassment.  Coach Jimbo Fisher’s 9-1 Aggies ran the table against all but national champion Alabama and finished ranked fourth in the country.

Pittman was Bielema’s offensive line coach for two of those overtime close but no cigars. He grew up in nearby Grove, Okla. an Arkansas fan recalling the Arkansas vs. Aggies bygone SWC rivalry that Arkansas dominated.

“I think we’ll talk about the rivalry hasn’t been a rivalry for the last nine years,” Pittman said Monday. ‘You have to win for it to become a rivalry a little bit more. It wouldn’t be a rivalry if it wasn’t for the fans.”

Expect impassioned fans of Aggie chants vs. Hog calls turning Saturday’s neutral site into partisan portions depending on how they situate.

Yet passion indeed could determine Saturday’s outcome from fans to the star players in Arkansas’ first it takes two to tango national matchup since 2016.

“There’s not a lot of time to really think about it because we still have No. 1 (Alabama), No. 2 (Georgia), No. 13 (Ole Miss) and No. 23 (Auburn) on the schedule,” Pittman replied when asked about  the magnitude of a nationally ranked matchup. “The other thing is I think it’d be a waste of time if I did. We’ve got a really good A&M team to play.”

“I’ve thought about us being ranked 16th,” Pittman said. “I’d be lying if I said I haven’t.  And we’re proud of that.  I’m really proud of the team. To be honest with you, the biggest thing I’m proud of is the State of Arkansas is proud of the football team again.”

An here’s a preview of the big matchup from CBS broadcaster Gary Danielson, who will work the game in CBS’ SEC Game of the Week, “perhaps Arkansas’ most meaningful game in a decade.”