Search
Home Arkansas Football Around the SEC Wally Hall Brings Up “Unwritten Gentleman’s Agreement” that Would Bar Texas from... 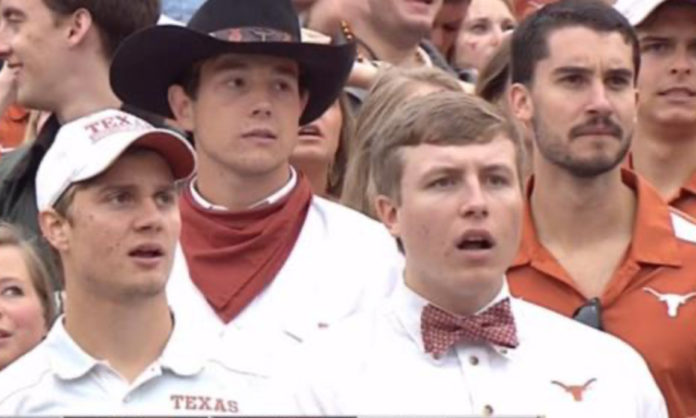 There were no smoke-filled backrooms and clinking of whisky glasses in the gentlemen’s agreement from a decade ago that some SEC football fans still hope will hold true.

With Texas and Oklahoma on the way out of the Big 12 at some point in the next few years, most signs point to their destination as the SEC.

On Tuesday, the schools formally notified the SEC they are seeking “an invitation for membership” beginning July 1, 2025, according to a joint statement.

Sources told ESPN.com the SEC presidents and chancellors are meeting Thursday to consider Oklahoma and Texas to the SEC in what would become the first 16-team superconference. “In spite of the formal notification from the Big 12 schools, a source familiar with the process cautioned that it still doesn’t guarantee the SEC will vote at that time,” ESPN reported.

“A three-fourths majority vote of SEC presidents and chancellors (11 of 14) would be required for invitations to be extended.”

A few days ago, it appeared that Missouri and Arkansas may join Texas A&M, the most likely school to block Texas to SEC, in a veto. More recently, the general consensus is that Texas and Oklahoma will get the necessary votes.

One thing that may be brought up in Thursday’s meeting, however, is an unwritten agreement that Wally Hall, the longtime Arkansas sports columnist, brings up in his most recent column.

According to Hall’s sources, the driving force behind Texas to the SEC is Kevin Eltife, a multimillionaire businessman and the chairman of the UT System board of regents.

“A source said the talks between Texas and the SEC started more than a year ago,” Hall wrote in the Arkansas Democrat-Gazette. “Oklahoma was part of the plan, but the Sooners weren’t invited to the party until Texas had its private meetings.”

Texas A&M is the SEC school with the most to lose with SEC expansion and will “quietly will fight the additions, but most likely they won’t garner the two [sic] other SEC school votes needed to block the move.”

Just 10 years ago, when Missouri and Texas A&M negotiated with the late SEC Commissioner Mike Slive to join the SEC in the last round of major conference realignment, the Aggies were apparently promised that Texas would never be allowed to join the SEC.

“There is an unwritten gentleman’s agreement among the 14 current SEC members that no additions can be made from a state that already has an SEC school,” Hall writes.

The agreement that Hall is referencing was detailed by Dr. R. Bowen Loftin, former Texas A&M president and Missouri chancellor:

“We flew to New Orleans in 2011 when this was coming to a head as Texas A&M joining the SEC progressed.”

“I had regents with me. We met with then-commissioner Mike Slive, the architect of the SEC Network came with us along with other SEC officials. Mike was asked very specifically whether Texas would ever be considered to be a member of the SEC, and the answer was that it would be up to us.”

“Texas A&M would have the ability to say yes or no.”

That was the case with any SEC school in a state with another school that was a potential future addition (which means Alabama, Tennessee and Mississippi got grandfathered in).

Think Florida, which didn’t want to see Florida State join the SEC. Or Georgia and Georgia Tech (a former SEC member). Or South Carolina and Clemson, the perpetual national title favorite according to sports betting in TN.

“I can tell you that during my time with the SEC at two different schools, that was the understanding we had,” Loftin told ESPN.com.

“It wasn’t written. There is no specific rule you can point to. You can point the finger at the statutes, talk about having a three-quarter majority to admit a new school, which means four schools could prevent it from happening legally and officially. But beyond that, there was this understanding. “

Mike Slive passed away in 2018. Greg Sankey is now SEC commissioner and, it stands to reason, wouldn’t be bound by such an unwritten agreement.

“It’s a new world,” Loftin told TexAgs.com. “This is really about money, and I’m sure we can all understand that. We can see the gears turning among the SEC and ESPN people.”

At this point it will surprising if this round of SEC expansion ends with only Oklahoma and Texas. See below for more on the possibility of Clemson joining the SEC:

According to the latest reports the presidents of the 14 SEC member schools will meet on Thursday to vote on SEC expansion.

Then, according to a report by Chip Brown of 247 Sports, Oklahoma and Texas will then each have regents meetings set for 9 am CT on Friday following the vote, to sign approve the move to the SEC.

When Will Texas and Oklahoma Join the SEC?

“Remember the year 2023 because there’s a lot that’s revolving around this,” he said on the Jboy Show. We have the [likely] expansion of the playoffs. Oh, and it just so happens that the CBS and the SEC contract is up in 2023…. We have NIL. We have wagering. That is not a coincidence.”

Here, Crain is referring to the fact that ESPN and the SEC in December announced a new 10-year deal that begins in 2024, which would make the network the exclusive rights holder for SEC football and men’s basketball.

That number could double with the addition of Oklahoma and Texas.

If OU and Texas bolt the Big 12 earlier than 2025, each university would have to pay a penalty of at least $75 million to $80 million to break their agreement with the conference, or hope that the Big 12 dissolves before the grant of rights contract expires, according to ESPN.

“One Big 12 source suggested the possibility that OU and Texas are banking on a relationship that turns so sour over the next few years, the Big 12 agrees to cut them loose for less,” according to ESPN.com’s Adam Rittenberg and Mark Schlabach.

Leaders in the Big 12 believe that ESPN (owned by Disney) has been the primary force in causing OU and Texas to seek greener pastures.

Bowlsby told USA TODAY Sports: The network is “intentionally interfering with our business operations by encouraging other conferences to poach the members of the Big 12 and providing incentives to them to do so.”

The Big 12 has proof that ESPN would like another league to “take three to five of our members,” added Bowlsby.

Jake Crain got some more insight from the Houston Chronicle’s Brent Zwernamen, who originally broke the story, on the issue.

“I feel like that class I took in realignment 10 years ago, closely following Texas A&M and then Missouri… I’m versed in how all these things happen,” Zwernamen said.

“And I remember with the Aggies, when that first came out that they were leaving the Big 12 and going to the SEC, the idea was it wasn’t going to happen for a couple of years. They were going to be a lame duck in the Big 12. It was really awkward from the very beginning. And then things started accelerating.”

Within a year, both Texas A&M and Missouri had joined the SEC.

Zwernamen can see a similar dynamic playing out this time.

In his opinion, there’s no way Texas and OU stay in the Big 12 until 2025. “Could you imagine three years from now we’re talking about Texas and OU going into their final season of Big 12 football? That ain’t happening.”

“So, I think based on everything being public, based on the awkwardness of it all, that things will get accelerated. Now, it’s more complicated obviously than back then with the Big 12 fighting for its life and so forth, and trying to get as much money out of this as possible.”

“But I think that 2023, for me, would be the latest at this point. I could almost see 2022 based on what I saw a decade ago and the way everything is negotiable.”

That’s certainly possible if, as the Big 12’s Bob Bowlsby contends, ESPN intends to “destabilize the Big 12 so that it implodes, thus absolving OU and Texas of their grant of rights obligations and their exit fee obligations.”

“If the Big 12 fails to exist as an entity, they can move quicker and they can do so for less money.”

And here’s great insight from Arkansas recruiting reporter Danny West on how this all affects the Razorbacks: