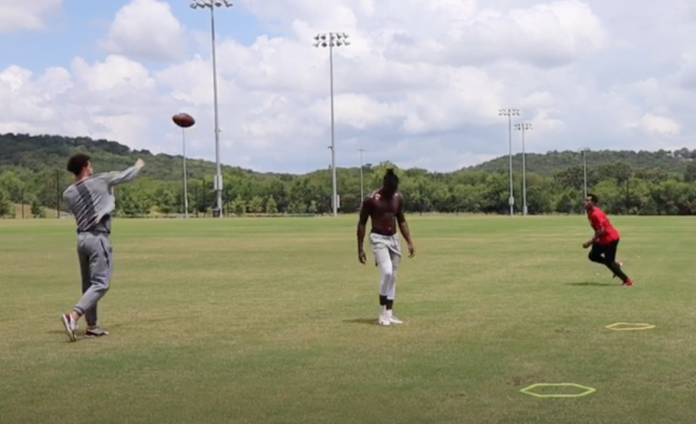 When it comes to the product on the field, Hog fans have seen a lot of aggravating issues over the last couple of years. One of the most frustrating has been the inability of the starting Arkansas quarterback, no matter who it is, to consistently throw crisp, accurate short and intermediate passes.

That lack of accuracy (coupled with porous offensive line protection) is a big reason Arkansas has been a cellar dweller in terms of offensive production recently.

Based on our first glimpse of Feleipe Franks throwing in Fayetteville,  Arkansas’ pass game is going to have a lot more pop in 2020. Through an early July video released by Arkansas wide receiver Mike Woods, fans can see for themselves Franks’ form and how he’s developing chemistry with Razorback wideouts.

As the presumed 2020 starter, who transferred from Florida this winter, Franks said in April: “I don’t think that you ever try to lead. I think that you try to lead and you come off as fake and then at that point, it’s not really leading.”

Still, Franks is showing a kind leadership by heading outside in the middle of Arkansas July heat and going through drills with his receivers, doing pushups when he makes bad throws. In fact, he’s been doing this for a few months already. Franks said the players (mentioning Mike Woods and Tyson Morris) organize themselves and do passing drills every Monday, Wednesday and Friday. As of April, they couldn’t be in groups of larger than 10.

He’s having fun, too.

Here are some more highlights from the Fayetteville workout (which appears to have taken place near Mt. Kessler):

3:00 – a super tight spiral on an intermediate route right into the breadbasket of Mike Woods, who puts together football videos and takes photos of collegiate co-eds and dogs as a hobby.

He throws another dart at 3:14, and at 3:46 completes a hitch route to Kendall Catalon, the brother of Arkansas defensive back Jalen Catalon.

At 9:20, Franks shows off his ability to throw ropes while on the run.

That running ability will be another welcome addition to the 2020 Hogs. Athletic ability, getting outside the pocket, never been a question mark for him,” said Florida beat reporter, Andrew Spivey, who covered Franks for three years.

Franks was Florida’s starter for 16 straight games until a terrible ankle injury ended his season against Kentucky in the 2019 SEC opener. (Franks says he’s 100% recovered.) Kyle Trask took the starting spot for the Gators and led them to a  11-2 season.

“You just need to know when it’s okay and when it’s not okay. And once Feleipe gets that and understands that as long as he has a great arm, every throw is not able to be completed, and it’s okay to take a five yard gain. Feleipe was doing that really well at the end of the 2018 season. Instead of taking that throw that may be intercepted, he was taking that five or six yard gain and turning into 20 or 30 yard gains when he’s running the ball.”

Toward the end of the workout video, you can see some of Franks’ arm strength and accuracy. There are some some beautiful spirals at 10:10 that will get Hog fans excited.

Watch the beautiful accuracy at 15:25, and an impressive leaping catch by Mike Woods at 20:13.

For a full sense for how far Franks can fling it, Exhibit A is against Tennessee when he threw a game-winning Hail Mary pass off his back foot from his own 35-yard line:

What’s the timeline on Hogs’ practices?

Crazily enough, Razorback football coaches haven’t yet seen Franks throw footballs in person. Earlier in the winter, before the COVID-19 pandemic shut sports down, they had seen him throw rolled up towels during strength and conditioning workouts, offensive coordinator Kendal Briles said in June.

According to Arkansas reporter Clay Henry, Briles added: “feel good about our quarterbacks. But I have not gotten to see Feleipe throw it in person — or any of our guys, but when I have seen him workout with our strength staff. He’s huge, 6-6 or better and 240. He’s sure pretty.”

“In our Zoom (virtual meetings), he knows it. Our players who have been with him in throwing sessions, say he can really spin it. I’ve seen him throw it on tape, and you can tell that’s true. It’s serious spin.”

Here’s the timeline as it currently stands:

July 24 – first walk through practice (which will be the first time the team has been together under Sam Pittman). These practices can last as long as one hour per day and no more than six hours per week.

“I’m assuming we’re going to get somewhere around 4.5 hours of walk-through specifically offense and defense, and we need it,” Pittman said “We’ll get that times two, and hopefully that’ll get us ready” for fall camp practices.

Franks on the Potential of 2020

Feleipe Franks is ready to get rolling. To show Hog fans something beyond the seriously shaky video footage.

Of his teammates, he said “these guys have been kind of the most motivating guys that I’ve been around. I’ve seen teams turn around in a year, with just the motivation and the stuff. I think that we’re on the right track.”

As far as the inability to go through normal spring  practicing, “I don’t think it’s a limitation. I think if you approach it the right way it’ll be a blessing in the end.”

“When I was at Florida, we went 4-7” one year. “The next year, we go and win 10 games and the New Year’s Peach Bowl. I’ve seen it firsthand. It’s all about motivation and we have it on this team. It just takes that one spark for that turnaround… I love being an underdog. It just makes me go harder every day.”

For a fascinating look at Franks’ career so far, and how his decision to attend Florida likely altered college football history, check this out: