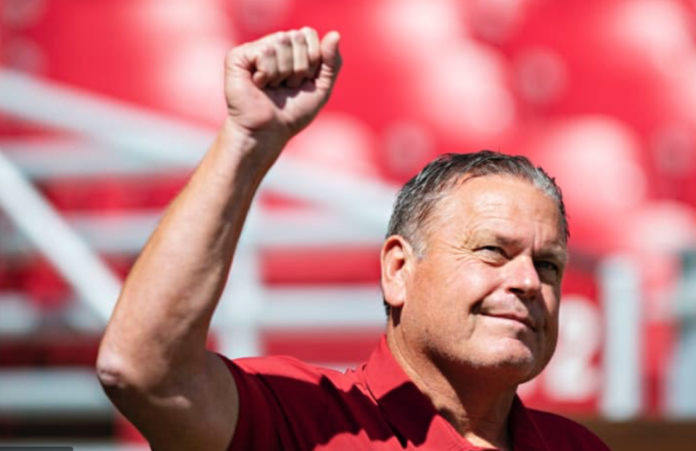 Dear Arkansas football fan, you are not alone.

Fans across the country feel the same way you do: ESPN doesn’t like your team.

Some of that feeling is based on inaccuracies, of course. But it is a feeling and, doggone it, your feelings are valid. Any fan would be hard-pressed to say a national media outlet “likes” their favorite team. Most would say the largest outlets have it out for their favorite team, instead. Reality doesn’t work that way. Individual persons may have a preference – who among us doesn’t have a favorite team?

Writers and broadcasters aren’t immune from giving more coverage to the teams with the highest NCAAF Championship Odds. Picking up on such perceived biases is a wheelhouse of ours at Best of Arkansas Sports (here, here and here, for example.) Still, major networks and news organizations don’t lean toward the local team like local media organizations do. If you want to argue that certain, tradition-rich teams gets the most coverage and calls, especially in the SEC, that’s something else altogether.

Still, it was a moderate surprise in ESPN – more specifically, writer Heather Dinich – proclaimed Arkansas as one of seven teams who could make a darkhorse run to the national title game in 2022.

Arkansas hasn’t come close being in such a conversation late in season in 11 years. Before the high point of the Bobby Petrino era, the previous such title talk into November came in 2006, but even then the conversation burned up by mid-November when the Mustain-Malzah-Nutt triangle turned into the Bermuda Triangle. Dinich’s seven potential contenders aren’t ranked in order of likelihood, nor are they a reflection of any kind of Top 10. The list is simply seven teams other than Alabama, Georgia and Ohio State, the three most likely teams to make the championship, who could swing a run themselves if the cards fall the right way.

Dinich isn’t wrong. Arkansas has a couple of plusses in its favor already by virtue of playing in the SEC West and returning an All-SEC quarterback. As Dinich wrote, “Quarterback KJ Jefferson is at his best against the best. Only two SEC quarterbacks had a higher Total QBR than Jefferson in conference play last fall, and they both played for the national title. Jefferson was responsible for 11 touchdowns against ranked SEC opponents, the second-most by any SEC player. Jefferson also led the Hogs with 664 rushing yards” in 2021.

While Dinich mentions the Razorbacks’ 13th-hardest schedule in the country in 2022 as a source of concern, it’s actually a relief compared to the recent. It isn’t the No. 1 hardest like it was in 2021 or second most difficult like it was the year before, but given the gauntlet that is the West, plus games against quality teams like Brigham Young and Cincinnati, no one will question whether or not Arkansas played ‘good enough’ teams should the Hogs be in the Top 10 of the College Football Playoff rankings come October.

Wins are required. It’s that simple. Dinich correctly pointed to Alabama as Arkansas’ most significant game. If the Hogs don’t win that game, they don’t make the Playoff. It’s the reality of playing college football in the era of the Super Team. Alabama is college football’s Super Team, much the way the Patriots were the NFLs in the 2010s and the Cowboys in the 1990s. Those teams earn a lot of ink, as the phrase goes, and a lot of corresponding vitriol because of it. Still, the Hogs and Tide play early enough, on Oct. 1 in Fayetteville, for either team to overcome a loss in the game to stay within shouting distance of a top-four finish in the playoff rankings.

That means, were the Hogs to drop, it’s a home loss. It also comes just ahead of a three-game road trip: at Mississippi State, at BYU, at Auburn.

But getting through that stretch unscathed would be a feat unto itself, one likely impressive enough to keep the Hogs on the radar. Consider, too, that if Arkansas were to make it through those three games without a blemish, odds are the Razorbacks would not have fallen badly against Alabama. It’s hard to envision a three-touchdown Crimson Tide win immediately followed by three straight Arkansas wins on the road short of KJ Jefferson just coincidentally missing the game against the Tide but none of the others.

Whether you believe in momentum or not – and I don’t (it isn’t real, unless you’re talking about Isaac Newton’s second law) – results are suggestive of future meanings. Or, in other words, if you’re getting blasted by one team, you probably aren’t good enough to win three straight road games against good teams.

On the other hand, what if Arkansas wins? Really. Every Arkansas football player on the roster was in elementary school the last time the Razorbacks beat Alabama. The air would smell sweeter on Razorback Road for weeks. If Arkansas were good enough to win that game, then odds are Arkansas was good enough to win the four games before it, too. And if you *are* one to believe in momentum, well, that only adds to the positive likelihood.

Dinich is just one writer. The ESPN data yields another outcome for the Hogs. The Football Power Index (which, full disclosure, this writer helped create in its infancy in the late 2000s) predicts Arkansas with 6.5 wins and 5.5 losses. The record projection doesn’t come from a hatred of the Hogs. It’s just math. Think of it as the analytics guys/gals vs the eye-test guys/gals. That’s the difference between what the FPI is suggesting and what Dinich says is possible.

Besides, players don’t change the way they play because they were disrespected. Not as a team. As much as fans want to say things like “Keep disrespecting us and watch what happens,” that isn’t the way coaches coach their players to play. That may serve as motivation for individual players, but sports at that level, or even on lower levels, are played so tenaciously that if someone lacks internal motivation, they won’t play to their maximum capability anyway. It wouldn’t matter what the “haters” say in that case.

The SEC West is a bear. Its quality makes the realizing an actual national title run all that more difficult. But the flip side is true, too: The Hogs aren’t out of the picture, and in fact are on the periphery of the picture early on in Dinich’s estimation. If the magic of Sam Pittman can carry through the first half of the season, Arkansas will be in the conversation.

Then, at that point, we’ll see a return to the golden days of 2021 after Arkansas’ surprising 4-0 start. Dinich will be far from unique in her take. Everyone else will be saying “ESPN loves Arkansas. They won’t shut up about them.”