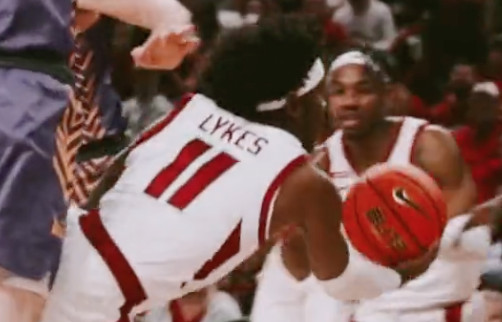 In what will be the second Power 5 matchup of the season for the Razorbacks, No. 13 Arkansas will face off against the Cincinnati Bearcats on Tuesday night at 8:30 in the championship game of the 4-team Hall of Fame Classic.

The Bearcats have won three of the four games in the all-time series, including the most recent one in 1997 when Bob Huggins’ Bearcats led by Danny Fortson ran roughshod over the Hogs in Cincinnati.

“They’re really well-coached,” Arkansas head coach Eric Musselman said of this year’s Cincinnati squad. “They play really, really hard. They scrap, they play with toughness, and they look like a team with good chemistry. It looks like they enjoy playing with each other. It was a really impressive second half for Cincinnati against a very talented Illinois team.”

On Monday night, the Razorbacks defeated Kansas State 72-64 behind 14 points from Connor Vanover and Chris Lykes (who was a perfect 10 of 10 from the free throw line late in the game). Arkansas fans who thought the often anti-Arkansas commentary of the CBS telecast of the recent Arkansas-Alabama football game was bad were introduced to a whole new level of antagonism from ESPN color commentator Mark Adams, a former college coach who continually lambasted Razorback players on air in the second half while Kansas State inched its way back into the game.

He was especially critical of the shot selection of Devo Davis and JD Notae before bearing down on Lykes at the end of the game. Adams kept criticizing Lykes for dribbling the ball and seeking out fouls in the final minutes instead of passing it away. Adams apparently couldn’t comprehend that Lykes is the team’s best ball-handler and a career 78% free throw shooter who was feeling it from the stripe last night.

Arkansas got off to a hot start, leading by as many as 18 late in the first half and took a 42-24 lead into the locker room.

K-State, which shot just 25.9 percent in the first half, made 46.9 percent of its shots in the second half to out-score the Razorbacks 40-30.

The Wildcats scored first to open the second half and used a 14-5 run in the second half to get to within nine. Notae made two jumpers in the lane and Toney had a layup to hold the Wildcats at bay. Nijel Pack sank to free throws with 1:53 left to cut the K-State deficit to six (62-54). From that point, Lykes made 8-of-8 free throws for the Razorbacks and pushed its lead to 10 (70-60) with 30 seconds left. K-State once again got to within six before Lykes sealed the win with two free throws with eight ticks left for the 72-64 win.

The 15 FT makes by Arkansas is the most by the Razorbacks since making 18 vs Morgan State on Nov. 24, 2009. Most of those came after a superb defensive effort in the first half, when Arkansas held K-State to 25.9 percent shooting. (via Razorback Communications)

This was the first game of the year Arkansas did not have a double-digit run. Its best run versus K-State was 8-0 at the 16:40 mark of the first half. Before the Kansas State game, Arkansas had been defined by a new word coined by Eric Musselman.

The Razorbacks played in front of a home crowd in the season’s first three games, and the fans at the mostly sold-out Bud Walton Arena provided a huge boost.

Musselman has touched on this indirectly when commenting on his team’s reliance on scoring spurts: “If your opposition has a scoring run, how do you keep that at an 8-0 run instead of a 16-2 run? One word I would use with our team so far in a small body of work is ‘spurt-ability’, if that’s even a word.”

In the previous games when Arkansas has struggled to score the crowd has played a role in energizing the team. That will likely have to come from within on Monday night. Which player will step up and be the “energy guy” this year? In years past players like Adrio Bailey and Desi Sills impacted the game oftentimes without stuffing the stat sheet. With Bailey graduating and Sills transferring to Arkansas State, this first game away from home could tell us a lot about this Arkansas roster and how they will handle pressure.

Arkansas vs Cincinnati: How to Watch

The below is from a previous article previewing Arkansas vs Kansas State:

When Kansas State Has the Ball

Kansas State comes into this matchup with a variety of offensive weapons. Namely, sophomore guard Nijel Pack, who has led the way for the Wildcats. Pack is averaging 16 points a game this year after an impressive freshman season where he averaged over 12 points a contest. As a unit, Kansas State ranks 95th nationally in offensive efficiency.

They shoot the ball particularly well from deep at a 44% clip. How things go from the perimeter could likely dictate the outcome of this matchup. Arkansas, a program that bolstered the best perimeter defense only two seasons ago, is now 334th in defending the 3-point line. Musselman will look to remedy this struggle against a sharp-shooting Wildcat offense.

Also look for Mark Smith, who is averaging 11.5 points and 7 rebounds, to play a key role for the Wildcats. “I think the way Coach Weber is using him is advantageous to him,” Musselman said of Smith, a transfer from Missouri. “He’s a good three-point shooter. He’s a line drive dribble-drive guy, as well. He can absorb contact.”

Defensively, expect Arkansas to pressure the basketball early and often. Kansas State has turned the ball over on 21.7% of possessions this season. Guards Devo Davis and JD Notae will continue to play aggressive in passing lanes as they force opponents to think twice before swinging the basketball. Down low, Kansas State will look to Ismael Massoud for production.

The Hogs have done a good job against inside threats this season and will likely have Jaylin Williams protecting the rim followed by a combination of Connor Vanover and Trey Wade in his absence. If the Razorbacks can finally slow down the perimeter offense, Kansas State will struggle to score against a stingy Arkansas defense.

On the other end of the floor Arkansas possesses a versatile unit that has scored well inside and out. Behind the guard play of JD Notae (averaging 21.7 points on 47.2% shooting and 3.7 assists per game) and Chris Lykes the Hogs can spread defenses with a combination of solid passing and a multitude of scoring options. Lykes was especially dynamic in the Razorbacks’ last game, converting one of the spectacular layups in Arkansas basketball history:

But Arkansas will face their toughest defense to this point in the season against the 77th-ranked Wildcast defense. Kansas State does a good job contesting shots and avoiding fouls. Musselman will look to the perimeter with essentially every player in the lineup unafraid to shoot from beyond the arc.

It will be interesting to see upon whom Musselman relies to start against yet another small lineup that features an average height (Kansas State starters average 6’3″). Expect Notae, Lykes, Davis, Williams, Toney and Umude to play significant minutes. Beyond that the Hogs have a question mark, but multiple viable options in KK Robinson, Trey Wade, Connor Vanover, Kamani Johnson, and Jaxon Robinson.

Regardless, expect Jaylin Williams to continue creating for his teammates from the post position. The 6’10” big man actually leads the Razorbacks in assists (17). Notae is No. 2 with 11 assists. Williams is the only player 6’10” or taller in the NCAA to average at least 5.0 assists per game. Williams ranks 4th in the SEC (35th in the NCAA) in assists per game (5.7).

Jonah Rapert is the founder of D1CollegeHoops.com and host of The College Basketball Podcast. Evin Demirel contributed to the above article.