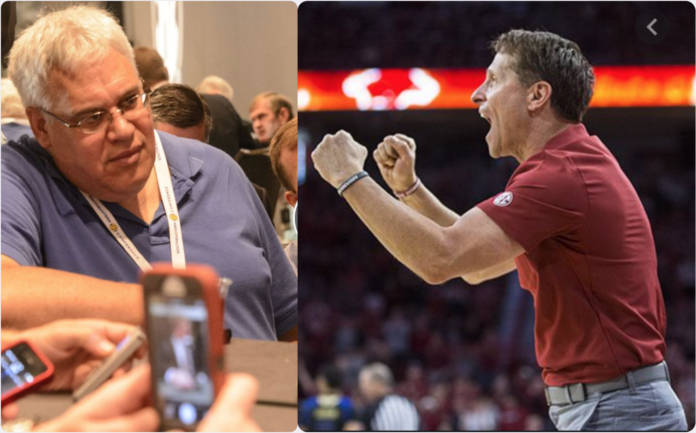 While other college basketball coaches are quarantining at home, binging on episodes of Locke & Key, Musselman is getting his coach on by himself, cheering on imaginary Mason Jones, Ethan Hendersons and Isaiah Joes with the kind of crazy-man fire that fuels the best in the industry:

And, while other college basketball coaches may write thank-you notes to the sports reporters who covered them all season, Musselman put together a tribute message disguised as a one-man mock press conference.

The video, which has already become the object of scorn for Tennessee assistant Kim English, went out on Thursday.

In it, Musselman bursts into the media room to provide an update on the imaginary season.

“Yesterday, I know the guys really worked hard,” the Razorback head basketball coach says, alluding to the practice that never was. Musselman then talks about an imaginary upcoming game (since the season was cancelled) and his expectations for a “great crowd.”

Then, one by one, he starts calling out media members:

“First of all, we’d like to thank Sully [KATV’s Steve Sullivan) making the drive up from Little Rock.”

Then he jokes around with Bob Holt, the uber-curious Arkansas Democrat-Gazette beat reporter: “Bob, why don’t you start us off with the questions please.”

“Nikki, that’s a great question. The shirt I’m wearing is all of our corporate sponsors on one t-shirt. It was specially made. Great question, Nikki, thank you.”

“Thanks Kevin, appreciate it. Um, just kind of wanted to let you know, Kevin, that with the high school ranks it only goes up to five stars. There’s no six or seven stars for in-state kids.”

Next up is the Democrat-Gazette’s Scottie Bordelon, O.G. Nate Allen and HawgBeat’s Andrew Hutchinson:

“Scottie, that’s a great question. I got a question for you, though. Scott. Do you know that there’s other players on our team besides Desi [Sills]?”

“Nate, because you came out to all the radio shows at Sassy’s, we want to make sure that you get an extra question as well. Andrew, not quite sure why you’re here asking the question. You’re probably best served to spend some time with your newborn.”

“Dudley, I can’t answer that question until you get the San Diego Padres hat or t-shirt instead of that St Louis Cardinals gear.”

“Wally, I know you’re not here for the press conference, but we really appreciate you keeping up to date on everything.”

“Hey Tom [Murphy], it’s really good when you cover us because it’s not quite as many questions is when Bob’s around…Thanks everybody. Bob, I’m sorry man, that’s enough. You asked about 13 questions.”

Thanks for hopping on the bus this season ? pic.twitter.com/UZPK8mBPKw