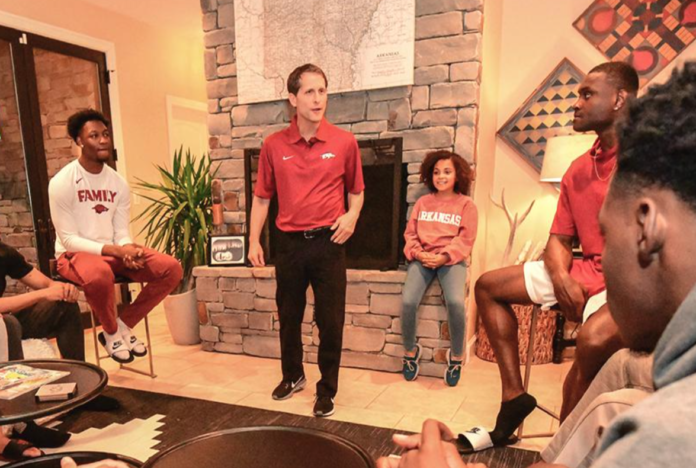 The film showed a squad high on talent and, after an up-and-down season, with a heavy dose of SEC experience as well. That footage was a big reason he decided to take the job of head Razorback basketball coach when Yurachek offered it soon afterward.

It starts with making the NCAA Tournament. But it should go much deeper. Musselman elaborated on vision for Arkansas basketball in 2019-2020 in this inspiring video:

On the Razorback basketball program accomplishing special things once again:

“You guys gotta believe it. I can think it in my head and everything, but I’m gonna tell you we have enough right here — even if there’s no recruit added — because I watched enough film. We have enough right here to make the NCAA Tournament and that’s gotta be our goal. That’s what you guys have to be thinking every single day. And if you play on that stage, and if you make the tournament, that means you’re a good team. Your value as an individual player is gonna go up.”

“…We played hard for 40 minutes and then we end up making the Sweet 16, and we were one point away from Elite Eight. You guys have more talent than that team, I’m telling you. You have more talent. Now I don’t know how hard you’re gonna play. But we have more talent if we play hard, we can do really special things. And I want you guys to know that. And you’re gonna see once we start practices, and I don’t have a staff, so I don’t even know what we’re gonna do over the next week, I don’t know if I’m just gonna start working two or three of you out alone myself or if we should just wait til I get a couple guys in here and we have full staff when we can really go out at.”

On preparing the Hogs like he prepared his NBA players as a head coach at Golden State and Sacramento:

“That doesn’t mean we’re gonna sit and … you’re probably gonna watch, I don’t know what you guys have done film wise, but my players all laugh at me and say I’ve got ADD, and my attention span is only about ten minutes. So if an assistant coach is doing film and it goes back ten minutes, I’ll raise my hand and say, “I’m bored, let’s go, we’re hitting the floor.”

On the new practice style for Razorback basketball

“So we’re not gonna sit there and watch film for two hours at a time. We’re gonna do segments. Ten minutes out on the floor, maybe go back to the video five minutes. So it’s gonna be fun, but you are gonna be expected to understand your scouting report in a quick five minute sketch. That’s kind of what you guys are in store for and look, I want every one of you guys to be here, to have fun, to compete, and become a family. And you guys already are a family and now I gotta try to figure out a way how to integrate myself and my personal family in with you guys — and have fun doing it.”

Go deeper into Musselmania by watching his press conference today :