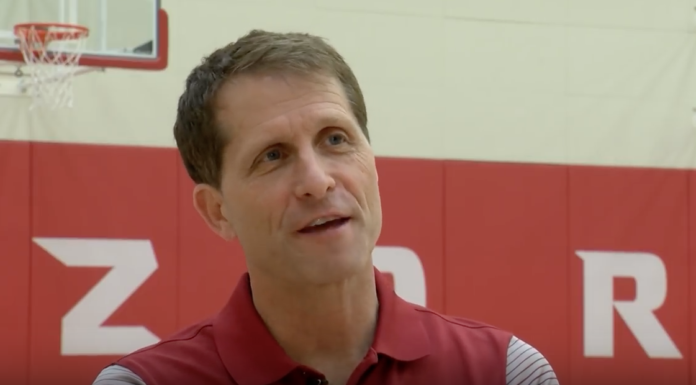 Eric Musselman’s a pretty busy guy these days. His family isn’t yet in Fayetteville so he can devote the lion’s share of each day to the Razorbacks. On most mornings, he gets up around 6 am, works out for a couple of hours, and then hits it hard until about 10 pm.

Beyond a photo op here and there, he doesn’t have much time to get chummy with other Arkansas coaches outside of basketball. He may, however, want to make time to trade notes with John Chavis.

The Razorback football defensive coordinator has spent decades devising a thousand ways to turn the lives of opposing quarterbacks in a living hell. (And to great effect, outside of the 2018 season.)

The basketball equivalent of that pressure defense so happens to be the goal for Musselman heading into the 2019-2020 season. “We call it ‘rush the quarterback,'” Musselman recently said of the new philosophy for the Hogs defense.

“We want the ball to not feel comfortable. We don’t want the basketball to have ‘eyes.’ The ball has ‘eyes’ if there’s no pressure on it, meaning it’s going to find the open man. Some of those phrases, the guys will be hearing a lot,” he told Pig Trail Nation’s Drew Amman.

On the surface, this new Hogs defense sounds like an otherworldly combination of the animated teapot from “Beauty and the Beast” and Nolan Richardson’s “40 Minutes of Hell” philosophy.

However, Musselman’s pressure defense stresses staying in front of the opposing shooters, at all costs, in order to reduce the statistical probability of made baskets. “You want to have shooters shoot with a hand in their eyeball, and shoot when they’re under duress.”

This type of Hogs defense is nearly opposite to the “40 Minutes of Hell” mantra of aggressively hawking ball-handlers and jumping passing lanes to maximize the probability of live ball turnovers, even at the cost of giving up rebounds and occasional open shots.

Forcing live ball turnovers, and being OK with giving up rebounds, was a bedrock principle of Arkansas teams coached by Nolan Richardson and Mike Anderson. Musselman is just as avid about preventing live ball turnovers and doing everything possible to prevent offensive rebounds and easy buckets. “We don’t want to give up layups. If we’re not a shot-blocking team, then we have to be a high take-a-charge team.”

Rebounding will probably be a challenge for the 2019-2020 Arkansas team that doesn’t have a player over 6’9″, assuming 7’3 graduate transfer Connor Vanover sits out a season. “We’re gonna be undersized this year for sure,” Musselman said. “We’re not gonna be very tall at the four and five spots. I think we will have great size at the guard spots. It’ll be very similar to how we were at Nevada the last four years where we had to have our guards and our small forward have to be great at their position in rebounding the ball.”

The change in defensive philosophy from “organized chaos” to Musselman’s seal-and-contain principles may be the biggest schematic change for current Razorbacks, who should have an easier time adjusting on offense.

However, Williams was such an impressive athlete at the collegiate level he also got interest from former Kansas City Chiefs coach Marty Schottenheimer — despite the fact he hadn’t played football since ninth grade. Here’s how Williams tells it:

“Marty Schottenheimer was a Kansas Jayhawk basketball fan. One of the games he watched was Oklahoma State against Kansas. Somehow, my name had come up and he came to watch me in college, and it evolved from there. They knew I was pretty quick from what they could see. I weighed about 185 pounds. One thing they did not know at that particular time was how fast I was. Once I got to Kansas City, they clocked me at 4.28 in the 40-yard dash.”

“You know what, if they had offered me a contract, I probably would have accepted just because I was in a position to just wait and see where I would be drafted in the NBA…”

Of course, Williams never did get that contract from Kansas City, which drafted him in the 12th round of the 1992 NFL Draft. But he can always imagine what would have been while watching Chad Morris and John Chavis coach during this upcoming football season.

It should be noted that this new Hogs defense philosophy of blitzing opposing shooters (while not fouling) takes considerable, ongoing effort on the part of its defenders. The Razorbacks won’t succeed in this style unless they match high mental disciple with great enthusiasm and stamina.

Here, the Razorback fans will play a role in keeping them motivated. One of the major reasons Musselman came to Arkansas was the prospect of coaching in front of 19,000 fans Hog calling at a fever pitch. He imagines the kind of extreme effort that could inspire in his players, who won’t be forcing turnovers a la the Richardson era but would instead force brick after brick from opposing shooters a la the Texas Tech or Virginia of today.

Musselman’s high energy and Hogs fans’ renewed passion for the program should make for an explosive combination. Brenden Suhr, a former LSU assistant coach who coached against Arkansas a few years ago when the Tigers had Ben Simmons, knows how dangerous a frothing Bud Walton fan base can get.

“I found it by far the most intimidating arena in the league to go into,” Suhr told Musselman on his podcast.

“I welcome going to Kentucky before that place, I’m telling you.”

*One of the nice things about the Mike Anderson era was the continual ties to the great figures from the Razorback program’s past. There are far fewer such ties in the Eric Musselman era, but still more than some Hog fans would suspect. Take assistant Corey Williams, who played for Eddie Sutton.

Sutton, of course, lifted Arkansas into national prominence in the late 1970s with the help of Arkansas native stars Sidney Moncrief, Ron Brewer and Marvin Delph.

One of those Triplets, Ron Brewer, still lives in Fayetteville. He attended a recent practice by Musselman. No doubt, they talked some about Ron’s days playing for the Cleveland Cavaliers under longtime NBA coach Bill Musselman — Eric’s father and coaching mentor.

To learn more about the Razorbacks’ potential in the 2019-2020, specifically on the offensive end, check my post below. Musselman gives his take on a new proposed three point rule and why he favors allowing basket interference.