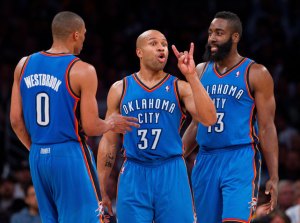 For an NBA player, dry patches don’t come much more Saharan than this.

Twenty-two times over the course of the three biggest games of his season, Derek Fisher tried to put the ball into the basket. Eighteen times he failed. You’d get better percentages from Shaq picking up wood and trying to hit against Cliff Lee.

Even before last week, the Little Rock native was having a tough go of it. Indeed, this has been one of his most difficult seasons since coming out of the University of Arkansas at Little Rock nearly 16 years ago. He spent half of 2011 jetting around the nation, carrying out duties as the president of the National Basketball Players Association in the midst of a lockout. He spent hundreds of hours thumbing through papers and negotiating in boardrooms while younger players stayed sharp playing pickup games. In this way, Fisher sacrificed on-court maintenance for off-court progress, and it showed by the time the season finally started in December: the 6-1 point guard stumbled out of the blocks, shooting well below his career 40% field goal average while having trouble staying in front of younger, quicker opponents.

The man who had helped the Lakers win five NBA championships, who for 13 seasons served as a calming liaison between the likes of Kobe Bryant, Shaquille O’Neal and Phil Jackson, was suddenly expendable.

And so, in March, Lakers management sent their team’s best leader packing for Oklahoma City. Out with the old, in with the new. Fisher could have chafed; instead, he embraced the change. In homage to his age, he chose 37 as his new jersey number.  “I figured since everybody likes to throw my age around in negative conversations, I’d just [keep] going ahead put it out there and let everybody know from the beginning, I am 37, but I think I can do some great things to help this team,” he told dailythunder.com.
Just as he started helping OKC heat up down the regular season homestretch, another bombshell dropped: Fisher was ousted from his NBPA president’s post, which he’d held for six years. Its executive committee, which had lost confidence in his ability to lead, voted by an 8-0 margin: Out with the old, in with new.

Yet again, Fisher embraced the new. The Thunder have one of the youngest teams in the league, and Fisher has essentially become a player-coach to them.

“He has that even keel … that calm, that quiet storm. That’s great for a bunch of young guys who at times get antsy, get anxiety.” Thunder guard Royal Ivey said. “I call him Uncle Fish … he has the wisdom of that uncle, that uncle that you call when you’ve got a problem with a girlfriend or you’re going through something. You call that ‘uncle’ because he understands, he’s not biased and he can relate.”

This mix of maturity and empathy was never more evident than at the end of the first quarter of last Saturday’s Game 4. With the game tied at 21, Fisher flared to the three-point line in front of his team bench and received a pass for a wide-open attempt. It fell short, bouncing off the rim, and Fisher quickly slapped his hands while grimacing. Immediately afterward, though, a grin spread across his face. It’s still a game, and it’s still fun. Those hands seamlessly transitioned from slapping each other in frustration to extending toward his younger teammates walking to the bench.

A few of the younger players cluster around Fisher while the coaches talk to the others. Fisher gives them pointers, little tweaks to help topple the Spurs, which had been the Lakers’ chief Western Conference nemesis of the last dozen years.

This spring, as Fisher’s own shooting touch dried up, he planted more seeds than ever. He may no longer be with the Thunder when his work reaches full fruition, but there’s little doubt summer will come sooner than later for the likes of Kevin Durant, Russell Westbrook and James Harden.

This article is slated to publish in Sync magazine.