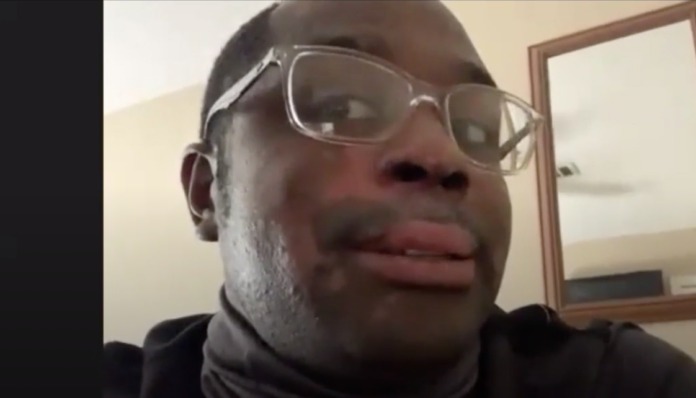 Former Razorback De’Anthony Curtis and his young family just had the most memorable Father’s Day of their lives. It’s one they weren’t sure he would even be alive for after the terrifying events of May 9th, 2020.

A cooler explosion, which happened the day after his 30th birthday, resulted in severe burns and put Curtis on a long road to recovery. So far, however, so good. Curtis is on track to return to El Dorado High, where he now coaches, on July 20th.

“This Father’s Day means way, way more than the rest of them have,” his wife Ashlee Curtis said. “That’s for sure.”

De’Anthony Curtis shared the details of his accident and its gut-wrenching aftermath in a KATV interview that aired on Sunday.

On May 9, Ashlee and De’Anthony were driving back to El Dorado from his hometown of Camden with a recently used fire pit and a Gatorade cooler in the bed of his truck. The cooler caught on fire. “I remember looking in my rearview mirror, and I saw the flames on the back of my truck.

“I remember trying to reach and grab the cooler [and move it away from the fire pit], but it was on fire. It was too hot. I couldn’t grab it,” Curtis told KATV’s Kyle Deckelbaum.

“Right before I was about to kick it, it exploded and hit me.”

“When it got hot, it exploded,” said Buck James, Curtis’ high school coach, in a May interview. “You can imagine that plastic and everything else got onto his body — onto his face, head, chest and legs. It’ s a very painful injury, for sure.”

Curtis spent a couple days in an El Dorado hospital and then was taken to the burn unit at Arkansas Children’s Hospital in Little Rock.

“I looked in the mirror and I couldn’t believe what happened. But I don’t even remember being in pain. My adrenaline was pumping so much I thought I was playing Alabama or somebody.”

But Curtis was indeed in pain. So much so, in fact, that he suffered high blood pressure and a mild heart attack. He needed to stay at ACH for 10 days while burns from his knees to the top of his head began to to heal. He also got a skin graft on his arm.

“When I was in the hospital, the only thing I wanted to do was see my two little girls [Kamdyn and Karsyn]. That was the only thing. And I’m just so grateful that I could do that.”

Though those trying days, James, who coached Curtis at Camden-Fairview in the late 2000s, checked in often.

“D’Anthony’s taken this like with everything else in life – he’s done it with a smile. When I text him and call him, he says ‘Coach, I’m fine. I’m doing better. I’m just in a lot of pain. He’s been real positive in this, and the people have really stepped up. D’Anthony’s the type of guy who would help anybody in any situation.”

Indeed, as a Hog during the Bobby Petrino era, De’Anthony Curtis regularly put others before himself. While in Fayetteville, Curtis visited students at elementary schools and was part of Lift Up America, the Joplin Clean Up, Library Clean Up, and the local Boys and Girls Club.

Curtis kept up his selfless ways in his new hometown of El Dorado, where he’s a keyboarding teacher and coaches tailbacks at El Dorado High. He said he plans to use his story as a lesson about overcoming obstacles for his students and players.

He added that he’s especially grateful for the outpouring of public support that was directed to a GoFundMe campaign to pay for medical expenses and the living expenses of his family.

Three hundred and seventy nine donors, including at least 10 former Hogs like Casey Dick and Grant Cook, have raised more than $26,000 for the Curtises. The original goal was $15,000.

“It’s one of those things that you don’t really know how to say thank you because you don’t feel that thank you is enough,” Ashlee Curtis told myarklamiss.com. “We are extremely grateful. We’re going to have quite a bit of bills coming up and that will help tremendously.”

What does Curtis do?

Both Curtis and his wife work in the El Dorado School District.

After a brief stint with the Tampa Bay Buccaneers, Curtis has mostly spent the last eight years teaching and coaching football in Camden, Batesville and in El Dorado.

“We got to know them from all of that,” Sarah Hatley said. “Also, they used to sit behind us at the football games and their children took my heart. At half time, the players would come out on the field and the girls would yell out ‘Daddy, Daddy, Daddy,’ until he would wave at them.”

God bless the Curtis family and the many fans and friends who have helped them in their time in need.

As KATV’s Kyle Deckelbaum puts it, “the spots on Curtis’ skin pale to the mark he’s left on others, in the classroom and around the state.”

De’Anthony Curtis as a star player

Coming out of Camden Fairview High School*, De’Anthony Curtis was ranked as the No. 6 running back in the nation. He could have gone most anywhere, but thanks to Garrick McGee he chose to stay in state with the Hogs.

He never became the football superstar he imagined for himself, but still racked up 198 rushing yards, 168 receiving yards, and two touchdowns while playing a supporting role on the two best teams Arkansas has ever produced in the SEC era.

A costly fumble against Kentucky as a freshman bounced him from his running back position. Over the next three years, Bobby Petrino and his staff moved Curtis from tailback to fullback to defensive back to wide receiver and back to running back.

De’Anthony Curtis could have quit, or — like so many players of today — transferred. But instead he stuck with the Hogs through thick and thin. “He’s the ultimate team guy,” Petrino said in the clip about Curtis’ career below.. “As long as I had the Hog on my head and ‘running through the A,’ I didn’t care where I was at, or what position I played,” Curtis told KATV in 2018.

Now, Curtis has leaned on help from Hog fans among others.

“We’re just praying for him and his family as they go through some challenges,” El Dorado head coach Steven Jones told the El Dorado News-Times. “We’re just hopeful for a speedy recovery. I know he’ll be ready to get back to normal and get back to being around the kids. He’s had such a positive impact on those he’s come in contact with. He’s great to work with and a big influence on our kids. So, we just pray he has a speedy recovery.”

Jones added that he expected Curtis to make a full recovery.

“He’s in stable condition with a positive outlook. I talk to him through text messages just about every day. I went up to Little Rock Thursday night. He’s very positive. I wouldn’t expect anything less of him.”

What did Curtis do after the Hogs?

He was a running back consultant at Camden Fairview High before becoming the running backs coach at Lyon College in 2015. He also worked at Sam’s Club and an AT&T store.

De’Anthony Curtis eventually became a junior high teacher at Barton Junior High in El Dorado. He taught there while serving as the junior high’s head coach and as an assistant for El Dorado.

“He could’ve done a lot of things, being a graduate, being a Razorback, with his personality, with his smile. I’m sure he would’ve had all sorts of opportunities But he wanted to make a difference,” Sherry Hill, the principal of Barton Junior High, said in 2018.

“Being around the kids is what I love doing,” Curtis said.

Hill recalled: “It wasn’t very far into the school year last year that I started noticing that he pretty much had a different handshake or high-five with half the seventh grade class,” she told KATV’s Kyle Deckelbaum. “And I’m like ‘wow!'”

Curtis continued: “Everybody knows sports are going to end one day. It’s what you do after sports and I think I’m doing what I was called to do.”