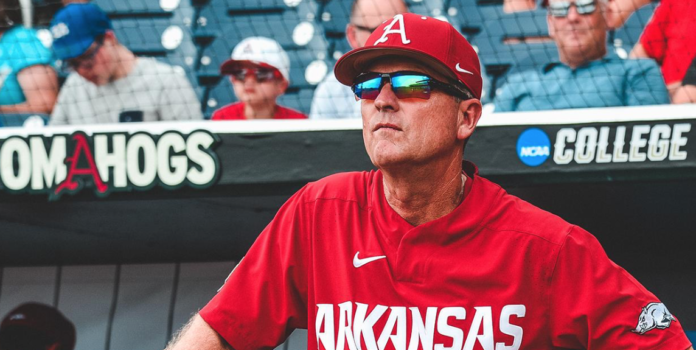 Heading into his 18th season as the Razorbacks’ head baseball coach, Dave Van Horn has taken the program to a new level of sustained excellence. Van Horn was recently rewarded for consecutive College World Series appearances with a salary increase.

In 2019, Van Horn has due to him $1.1 million in annual compensation on a contract that extends through 2023. That includes payments from a sponsorship by Easton bats. On top of that, bonuses for team’s performance, coaching honors and academic scores kick in.

Arkansas’ appearance in the 2019 NCAA Tournament, for instance, gave Van Horn an additional year on his agreement and a $50,000 salary increase, according to USA Today.

But this past week, the University of Arkansas board of trustees approved salary requests from more than 100 UA employees, including Van Horn. Now the Hogs’ skipper can earn a maximum of $1,461,000. Here are the approved ceilings for other Razorback coaches and administrators:

Van Horn’s contract bump also means only about a third of all Major League Baseball managers make more than he can. In August of 2018, USA Today released the salary figures for all MLB managers, as shown below.

Since then, two of the managers making more than $1.46 million have been replaced by less experienced managers who would make less. This means Dave Van Horn can make more than about 2/3 of all MLB managers if he hits all of his incentives.

Even if he hit none of them, and stayed at “only” $1.1 million, he’s still middle of the pack among MLB managers.

NB: The salary of Angels manager Brad Ausmus is unknown. Whatever it is, it’s millions less than that of his predecessor, Mike Sciascia, who made $6 million in 2018.

Likewise with the Orioles’ new manager Brandon Hyde. Hyde replaced Buck Showalter, who made $4 million in 2018.

How is this possible?

Two forces are at play.

In the MLB, the salaries of players keep going up despite overall viewership going down. As the explainer video below lays out, the MLB has more players making at least $10 million per year than any other sports league in the world.

Plus, “authority and control is now being placed more in the hands of general managers and analytics experts rather than superstar managers who have household name recognition,” Steve Berkowitz and Bob Nightingale wrote for USA Today. That means those positions are now getting a bigger piece of the expanding pie that is MLB teams’ bottom lines.

As a result, managers’ salaries haven’t nearly kept pace with the salaries of the star players, or of GMs and analytics experts. It’s to the point where some could argue that the modern-day MLB manager is actually underpaid.

Meanwhile, in college sports, the profit margin for the major team sports keeps getting bigger and bigger each year. But, in college baseball, the pressure to win is less than in football and basketball. So, in this sport, seniority is getting rewarded with bigger and bigger contracts — a process that goes against the grain of the big time college football and basketball where winning coaches get fired more frequently.

“The factor that most frequently forces premature coaching changes in college football are large, powerful and vocal fan bases that get disgruntled” sports lawyer Bob Lattinville told USA Today. “Baseball doesn’t motivate the fan bases of most schools to the degree that football does.”

Lattinville continued: “If you’ve got a good (coach), you’re best off hanging on to him even if you have to pay top-of-the-market compensation. With the ever-expanding responsibilities of ADs now, including some really tough issues, they will happily pay top-of-the-market for program success and stability.”

He, and the rest of Razorback Nation, are happy to keep him on board for a few extra hundred thousand dollars. It’s a bargain for what he’s done — and will continue to do — for the program.

This video explains MLB vs NFL vs NBA contracts: