Search
Home Arkansas Baseball Around the SEC Dave Van Horn Dives into the Nitty Gritty of Recruiting Ruckus with... 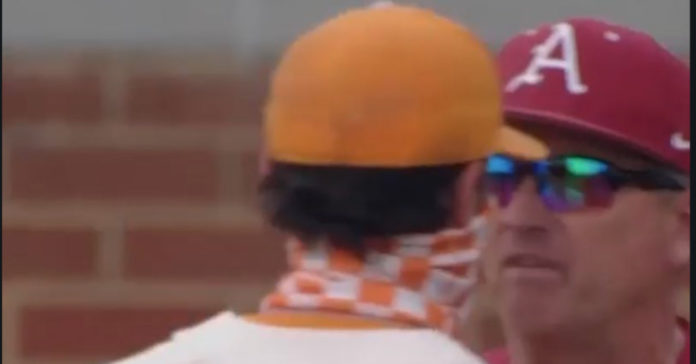 The 2021 Arkansas baseball season will forever be known by a few key moments.

The thrilling season-opening comeback against Texas Tech, Robert Moore’s “Oompa Loompa” homers vs South Carolina, securing the program’s first SEC tournament title against Florida, Kevin Kopps saving Arkansas’ bacon against Nebraska in Game 3 of the Regionals round and Kopps walking off the mound for the last time as a Razorback are just a few unforgettable episodes.

Of all 2021 Arkansas baseball memories, though, the Dave Van Horn-Tony Vitello spiff remains the most fascinating on a psychological level.

After Arkansas eked out a Game 3 win on the road vs Tennessee in the regular season series, during the time coaches normally shake hands, Van Horn and Vitello got into a very public and very heated argument.

The most surprising part about the blowup was that it didn’t happen between two coaches who openly despise each other (think Bret Bielema and Kliff Kingsbury or John Calipari and John Chaney).

No, instead, this happened between two friends who we assume care about each other. Tony Vitello, after all, coached under Dave Van Horn for a few years in the Arkansas baseball program.

In the aftermath, it was brought to light that the fracas revolved around recruiting an All-American JUCO player — Bryant native Logan Chambers — who finished the 2021 season with a .404 batting average, 16 home runs and 76 RBIs.

Chambers is committed to play for Tennessee in the fall. But Van Horn and the Arkansas baseball staff had kept recruiting him in the last year in hopes of flipping him. Tony Vitello didn’t appreciate that.

Both coaches have publicly buried the ax in the last couple months, and seem to be on good terms again. It appears a few of the YouTube videos of the incident that were published in the immediate aftermath have been deleted, although a few choice clips remain here and there:

On the Hog Pod with Bo Mattingly, Van Horn said the blow up was almost entirely about recruiting.

“You come into our state and you’re talking to kids in our state and you get a commitment from a kid in our state and we haven’t had that opportunity to see him yet and maybe you commit him without seeing them,” Van Horn said, mentioning that a lot of the recruiting over the last year was done remotely, not in person.

“It doesn’t mean anything to us anymore. We’re going to go out and talk to him.”

Apparently, there had been other issues from a few years ago that had been simmering as well.

“He was heated and I got heated and we talked about some things that happened three or four years ago that I never brought up whenever he left [the Arkansas baseball program] and I didn’t feel good about it — but he kind of explained what happened there and so I appreciate that.”

“… I don’t stay mad, I don’t think you can go through life that way. I don’t hold a grudge, I move on because life’s too short to be upset all the time.”

The situation Van Horn is referring to here from a few years ago involves Tanner Kohlhepp, a Wisconsin who flipped from Arkansas to the Vols.

The two coaches’ argument exposed some of the fiery competitiveness that must run through most any modern big-time college coach.

“We’re recruiting at a high, high level. We’re going after the best players in the country,” Dave Van Horn said.

“We’re battling everybody in every state and there’s about 10 schools that can really tell you they’re doing that.”

In the past, from the outside at least, college baseball didn’t seem as pressure-packed and rancorous as its basketball and football counterparts, but that may be changing as baseball continues to bring in more money.

It’s easy to assume that coaches who worked on the same staff in the past would enjoy a chummier relationship than others, but it’s clear that isn’t necessarily the case.

The chances of these kind of frictions on the recruiting trail increase for Dave Van Horn with every year that passes on a head college coaching career that began at Central Missouri in 1994.

Competing against former players and assistant coaches is “a little bit of mixed emotions,” he told Mattingly.

“It was tough after we beat Nebraska. [Nebraska coach] Will Bolt one of my first recruits I ever brought there. I know his mom and dad real well. They text me and send me Christmas cards. They just send me texts through the year: ‘Hey that was a great win.'”

“And then you got Tony over Tennessee and Coach [Rob] Childress was Texas A&M. You could go on and on. I coached against Lane Burroughs and had him on my staff when I was at Northwestern. He’s at Louisiana Tech.”

“It’s just growing because now you’re getting guys that played for you that are out there. And their assistants are going to be head coaches and it just means I’ve stayed around a while.”

“And that’s a good thing, it means I’ve had really good coaches and that’s why they’re out coaching other programs.”

“But I get nothing out of it as far as it’s just a win or a loss. If we beat them out, I feel great for our program, but I actually feel bad for them. Because I know their wives and their wives text my wife.”

“They might contact all year. But when it gets close to the games they don’t talk, they wait. They don’t make too much contact. They’re not hugging each other before the games. It’s just a different feeling.”

When Van Horn introduced Vitello as an Arkansas baseball coach:

“You kind of hope he could get through the whole year without the injuries but unfortunately it got us a little bit late in the season,” he told Mattingly.

On pitcher Peyton Pallette, who suffered an elbow injury in late May: “He has a tremendous arm and he was just starting to become more of a pitcher. This is a young pitcher, he’s a shortstop and a pitcher in high school, summer ball. And he made a big jump from his first year to second year. This is his second year. And we could have used him down the stretch.”

“We had some of our bullpen pieces, Zebulon Vermilion and a few others that we didn’t have those guys a lot. And then when they would throw, they were sore and just couldn’t recover, and we had to lean on Kevin [Kopps].

“And Kevin wanted the ball, in incredible shape, arm never got sore. His body got sore before his arm did, it was amazing. We didn’t have guys, but other teams didn’t either.”

“A few injuries, maybe position player wise here and there [Brady] Slavens at the end of the year. Some guys were slumping a little bit and we still almost won those games.”

Arkansas, of course, was ousted by North Carolina State in the Super Regionals after losing two one-run games. Meanwhile, their SEC rivals (or emerging rivals) Vanderbilt, Tennessee and Mississippi State all made it to the College World Series.

“And I figured those two, they’re not really Razorback baseball fans. They’re just mad. Because now the team they wanted to win didn’t get to the College World Series and they didn’t have anything to do for the next two weeks, whatever.”

Make sure to check out the entire interview below:

At 19:55: What Van Horn told the Arkansas baseball team about winning on the road in a future Super Regional

At 31:20 – On feeling bad about the ticket prices in Fayetteville during the NCAA Tournament

At 44:00: A really great response to the question of where he puts his SEC Coach of the Year award