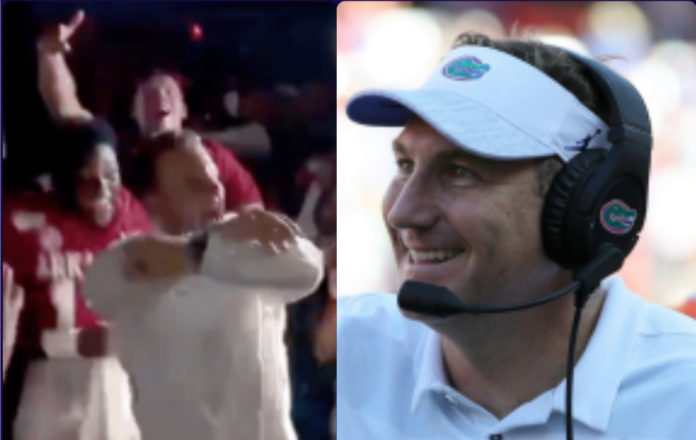 These days, after every Razorback win, the Hogs have a simple but effective tradition: Sam Pittman gathers his guys in the locker room for a quick pep talk, then finishes with a simple rallying cry before they all celebrate for a bit. It’s nothing fancy. The most elaborate prop yet employed in these post-game has been an old bowling ball with “Larry” etched into it.

When these post-game rituals kicked off early in 2020 after a win against Mississippi State, the first of the Sam Pittman era, Arkansas linebacker Bumper Pool was asked to compare the style of the new regime vs the old. Namely, how did it compare to the “Club Dub” celebration with which Chad Morris had horrified Arkansas fans the year before?

“The work that we put in this — this one’s a lot different. It’s not a surprise. We didn’t beat an out of conference school, we beat an SEC school. We felt like we earned it because of the work we put in. We were four days a week grinding it out. And I think we’re going to keep that mentality.”

And, in the 13 and a half months since then, the Razorback football players have kept that mentality. Heading into the last two games of the year, they have a No. 21 national ranking to show for it.

But, every once in a while, shadows from the past flit across the radar to remind us to never take Sam Pittman and this new era for granted. We’ve seen that happen already twice this week. There was former Razorback coach Bret Bielema, now at Illinois, Bielemically recently making light of his COVID diagnosis and saying “My body isn’t exactly a temple of peak training right now.”

A few days before that, the sinking ship that is Florida Gators football brought Arkansas’ darker days to mind.

The once-proud Florida football program is undergoing an existential crisis.

Progress under Dan Mullen, in his fourth year as Gators football head coach, not only appears to be stalling but backtracking. The Gators have lost four of their last six games, surrendering at least 34 points in four of them. Yet Florida’s most disturbing recent game wasn’t a loss, but rather a win.

Last Saturday, Florida (5-5) surrendered 42 points to Samford, an FCS school — the most ever given up by the Gators in one half of football in program history. Yes, Florida did end up winning the game 70-52, but giving up that many points to a mediocre sub .500 FCS school is downright disturbing.

Afterward, Mullen called it a “great win for the program” and engaged in this locker room celebration:

This immediately evoked memories of Chad Morris’ “Club Dub” experiment after an early-season win against Colorado State in 2019.

“Club Dub” was simply the Arkansas locker room remade to look like a dance club after victories. In it, surrounded by players, Morris unleashed something that looked like a cross between a Red Bull-fueled seizure and actual dancing.

Here is the incriminating evidence:

The parallels are immediately noticeable. Sure, Mullen’s version is less organized, but the point is he’s celebrating a regular season win over a bad-to-mediocre team like it’s the Super Bowl.

“If you’re going to be celebrating like that, you’re not going to consider you in that category of Alabama and Georgia. You’re just not,” Saturday Down South’s Connor O’Gara said on “Halftime” when Phil Elson made the Dan Mullen-Chad Morris comparison. “You’re going to be viewed in a much different lens.”

O’Gara continued: “Let’s think about the person who posted that on social media. Who thought, ‘Hey, you know what? Everybody needs to see right now is us celebrating this 70 to 52 win against a 4-5 FCS team?’ If that thought process is happening, much like the situation that happened at Texas last week with that leaked audio, I just question where exactly your head is at, if you think that that’s going to be received well.”

“It was never going to be received well, and this is the SEC — that’s the type of stuff that just does not fly.”

It didn’t fly long with the Razorbacks, either. Just a week after “Club Dub,” Chad Morris proceeded to lead the Razorbacks to a home loss against San Jose State, the worst loss in program history. In retrospect, that loss essentially solidified Morris’ fate as the wheels fell off the wagon a few games later.

Could this embarrassing win also seal the fate for Dan Mullen as Gators football coach?

“He tried to pull the wool over everyone’s eyes and acted like there was something to celebrate when it was truly a disgraceful afternoon in the annals of Florida football,” Finebaum said on ESPN’s College Football Podcast. “I think he lost, I think he lost big, just perusing some of the content across the country (Saturday night) and (Sunday). I was on a plane coming back at the time and everybody on the plane was laughing at Florida and laughing at Mullen.”

In Finebaum’s opinion, Mullen is only safe if he wins both of the Gators’ last two games against Missouri and Florida State.

Chad Morris, for his part, ended up finding safety in the clutches of his good friend Gus Malzahn. Morris served not super successfully as Malzahn’s offensive coordinator in the 2020 season, which ended in disappointing fashion for Tiger fans.

Ironically, Malzahn’s last filmed moments with that Auburn team came in the form of herky-jerky dance moves after a season-ending win against Mississippi State. He was fired soon afterward, in part because of Morris’ failure to take the Auburn offense to new levels.

Where is Chad Morris Now?

Since flaming out at Auburn, Chad Morris has returned to coaching high school football in Texas. This time around it’s at Allen High School, a traditional powerhouse in the DFW metro area. It hadn’t lost more than one game in a season since 2005.

But, under Morris, the team has lost two of its first 11 games. He was absolutely raked over the coals for the last loss:

No footage of inappropriately enthusiastic celebrating in the locker room has surfaced after any of Allen’s wins. Nor, thankfully, has Chad Morris backslid into an episode of the Elaine Benes-like “dance” spasming that overtook him at home a few years ago.