Search
Home Arkansas Baseball Razorback News It Will Be a Crying Shame if Hogs Become Dickey-Stephens Park’s Only... 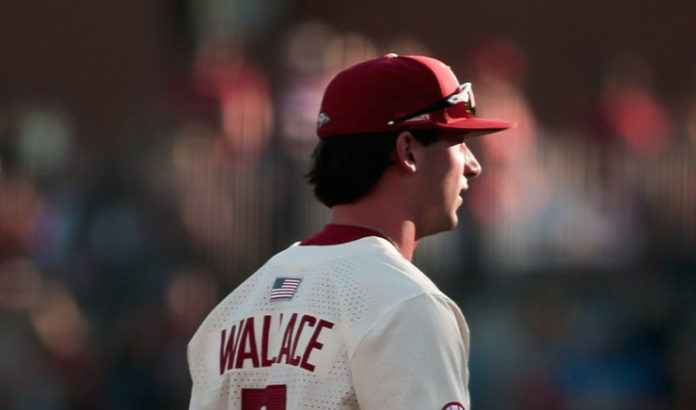 On Tuesday night in North Little Rock, the Arkansas baseball team narrowly escaped embarrassment by eking past a sub-.500 UCA squad 2-1 in 10 innings in front of a sell-out crowd of 10,333 people.

The Razorbacks have now won 18 consecutive midweek games and are undefeated in their last 14 contests against in-state opponents, a streak that dates to the 2019 campaign. Arkansas also improved to 10-1 overall in games played at Dickey-Stephens Park, which is also home to the Seattle Mariners’ Double-A affiliate Arkansas Travelers.

While Dickey-Stephens Park is pretty much synonymous with the Travelers, those days may be numbered. In fact, if things go south, the Razorbacks’ annual appearance would be left as as the park’s only big-time baseball draw.

That’s because the Arkansas Travelers’ historic run in central Arkansas since 1901 is in jeopardy due to a quarrel over who is responsible for stadium upgrades that are now required by Major League Baseball (MLB).

In early 2021, the MLB restructured the minor league system including cutting short-season ball, reduced the number of affiliates (from 160 to 120), getting rid of the historic leagues (like the Texas League the Travs competed in for decades) and reallocating them across four generic levels. Improved minor league player salaries and required upgrades to ballparks were also included in the restructure.

For professional baseball to continue at Dickey Stephens Park, a series of improvements must be completed by the 2023 season or MLB could require the Arkansas Travelers Baseball Club to relocate. Improvements include the actual playing surface as well as the facilities so they are better suited for professional athletes and women. All in all, the upgrades have been tagged with a roughly $11 million dollar price tag.

The crux of the issue is who pays for the upgrades. The Travelers say the city of North Little Rock should pony up since they own the ballpark and the Travs are simply a tenant. For reference, the ballpark was opened in 2007 with the Travelers signing a 20-year lease at $230,000 a year until 2025 and 2026 where the rent cuts in half.

The City of North Little Rock (NLR) is taking the stance that the lease clearly states that the tenant is responsible for improvements.

Yuck. This is tricky leases and lawyers type stuff that will be potentially expensive, hopefully not contentious, to sort out.

The City of North Little Rock has already pledged to fix the biggest issue Dickey Stephens Park currently faces – sinkholes in the outfield. Due to the playing field’s proximity and its level in relation to the Arkansas River, sinkholes in the outfield have become an significant issue. Engineers have now devised a plan to hopefully alleviate future sinkholes but it comes with a $5 million dollar price tag.

So hanging in the balance is another $6 million dollars in upgrades that will have to be negotiated between the two parties. North Little Rock Mayor Terry Hartwick, who played a key role in bringing the Travs to NLR when he ran the city’s Chamber of Commerce, has publicly stated that the city wants to keep professional baseball.

The good news is the Travs are no longer playing at the old Ray Winder Field in Little Rock. We wouldn’t be talking about upgrades for Ray Winder because there is zero chance that facility could ever be brought up to modern standards. Instead, the City of Little Rock (or one of its neighbors) would be scrambling for how to pay for a new stadium. As vintage as Ray Winder Field was, it was horrible for players as not only the playing surface was rough but also the clubhouse/locker room, dugouts and so on were dank, dark and completely out of date.

But from a fan perspective, Ray Winder was cool. Way cool. The real organ, big Dave Kable launching home runs over the big screen onto I-630, Walter “Hook Slide” Bradshaw doing his thing for tips and beer (mostly beer), Fernando Valenzuela’s rehab assignment where fans were allowed to watch the game from the warning track due to ticket demand. The men’s restrooms…well if you know, you know.  The place just oozed with nostalgia.

What happens if NLR and the Travelers can’t come to terms with the improvements by the time Opening Day 2023 rolls around? Being a lifelong baseball fan, it is nearly impossible to think there would be no professional baseball in central Arkansas. As mentioned, the Travelers date back to 1901 and have played every season since except seven. The Arkansas Travelers nickname also has the distinction of being the second longest continuous use of a nickname in minor league baseball only behind the Buffalo Bisons.

I personally have over 45 years of history of watching the Travs and although I don’t go near as much as I did as a kid, I will still roll out there for something to do, see a former Razorback or another esteemed prospect. I know plenty of people that routinely go just because they love baseball and have as long or longer experience with the Travelers.

Despite lower attendance numbers, the product is very good professional baseball. Most people associate AAA with being one step closer to MLB. Actually, though, AA baseball is where the guys inching their way closer to the big leagues are placed as AAA is mainly full of former big leaguers and older prospects at the end of their viability who often bounce back and forth filling in for injured players. And as stocked as the Seattle Mariners farm system (the current MLB affiliate for which the Arkansas Travelers receive players) is with prospects, you could easily catch multiple future big leaguers on the field at any time.

Will another central Arkansas community step up and build a new ballpark with MLB required standards? Little Rock doesn’t seem to be a candidate, although the old War Memorial golf course has the land required for a ballpark and parking. One would think Midtown would welcome the addition.

Does Benton (home of former Hog pitcher Cliff Lee), Bryant (home of former Hogs Blaine Knight and Trevor Ezell), Conway or Cabot jump into the fray? I don’t think so, but those are baseball crazy suburbs so maybe there is an outside shot for one of them to get in the mix. But doubtful. Cities of that size likely don’t want to spring for a ballpark of that size and expense and also the matter of support. I don’t see people in Little Rock or North Little Rock driving to go watch a minor league baseball game in one of those cities.

The Travelers are in the right spot. Dickey-Stephens Park is accessible from all the central Arkansas communities with the beautiful backdrop of downtown Little Rock beyond the outfield. The booming Argenta area of North Little Rock and just across the river in downtown Little Rock can support before or after game nightlife.

And coming out of the pandemic, I doubt anyone is ready to jump into building a new ballpark with the current construction costs and extended timelines.

For baseball fans and especially, the long-time Travs fans, the City of North Little Rock and Arkansas Travelers Baseball Club need to get into “let’s work together” mode to sort this out. The fact that MLB didn’t make the Travelers one of the 40 minor league teams that were vaporized is a feather in the cap of both parties.

This issue isn’t unique to Arkansas. Minor league affiliates nationwide are also wrestling with it. Even the stadium used in the iconic baseball movie Bull Durham is in the same boat at Dickey Stephens Park. Countless ballparks across the country are scrambling to meet the MLB requirements and maintain their relationship with their MLB team and their fans.

The money to get this done exists. I’m not sure where it comes from, or how, but it exists. Admittedly, the $6 million dollars is not chump change so the two parties will have to get creative. But I’m confident it will all work out. The city acknowledges the value of Travelers baseball and I don’t get the feeling the ownership group would like to be told to move away from the area. An empty, vacant ballpark wouldn’t be good for downtown North Little Rock’s burgeoning scene either.