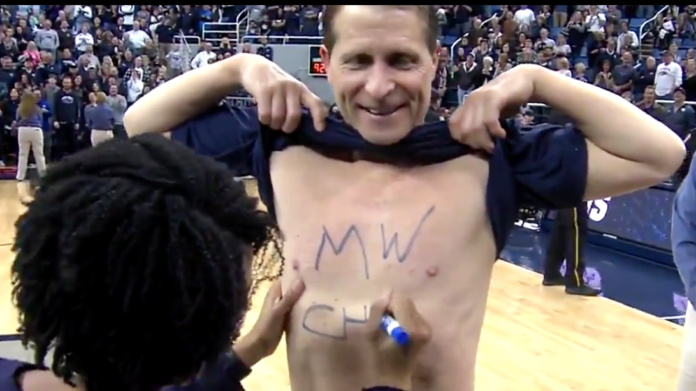 For days, it looked like Kelvin Sampson and Chris Beard were frontrunners for Arkansas’ basketball coaching vacancy. Beard, though, has led Texas Tech to the Final Four, which postpones any talks on that end and makes him all the more attractive to every other program. Plus, as columnist Wally Hall notes, Chris Beard is “happy where he is. Two of his three daughters are close to enough to drive to for visits (the oldest is in college). If he had a dream job it would probably be Texas, his alma mater and where he worked as a graduate assistant for Tom Penders.”

UPDATE: According to numerous reports from national and Nevada reporters, Arkansas will hire Eric Musselman as its next basketball head coach. Click below to learn about the first time he met the Razorback players after his hire. Read below that for the backstory of his hire and more on the implications of the Musselman era.

Wally Hall noted in his column today that he wasn’t sure if this was an April Fool’s Day joke or not. Given Berman’s professionalism and the fact Berman never unveiled this was a joke at any point on April 1, it’s safe to assume he knows what’s talking about.

Other names have been floated as possible targets, including Buzz Williams and Steve Alford, but perhaps the most intriguing is that of Eric Musselman. Musselman’s most recent claim to fame is turning the Nevada Wolf Pack into a mid-major powerhouse. Musselman has led Nevada to a Top 10 ranking and three straight NCAA tournaments, including a Sweet Sixteen in 2018.

Eric Musselman would have by far the most impressive resume in the history of first-year Razorback basketball coaches. The 54-year-old has been the head coach of two NBA teams — Golden State and Sacramento. In his first year as head coach, he finished second in the coach of the year voting to Gregg Popovich. He’s also been an assistant under some of the brightest minds of the game, including Mike Fratello (Memphis Grizzlies), Chuck Daly (Orlando Magic), Lon Kruger (Atlanta) and Herb Sendak (Arizona State). On top of that, his own late father, Bill Musselman, was an NBA head coach.

There’s no question Musselman’s hiring as the Razorbacks’ coach would make a major splash. Beyond the coaching jobs and NBA ties, he also has a fiery, passionate style that would be perfect for whipping the Bud Walton masses into a frenzy. He’s given to disrobing during Nevada’s biggest get-hype moments. This 5-foot-7 ball of energy often ends up “looking like a cross between a tennis player on a hot court, a frat boy on a Friday, and a toddler who urgently needs you to know that he has a belly button,” as The Ringer’s Katie Baker puts it.

It melts the mind to think of what Musselman could do with 20,000 rabid SEC fans (8,000 of whom enjoy wrestling) in the palm of his hand.

But here comes the caveat.

Until now, Musselman hasn’t liked recruiting blue chip high school players. His success at Nevada has mostly hinged on nabbing transfer players from Power Five schools. While all programs include transfers, he leans on them way more than most colleges. In fact, Musselman didn’t host a single high schooler for a visit this past season, nor did he attend a high school game.

That’s an issue, sportswriter Michael Maciejewski notes. “While building a team through the transfer market is fine, the problem is that most big-name schools do not operate that way. Most Power Five schools like to build with high school players while sprinkling an occasional transfer or two.”

Nevada can overwhelm other Mountain West teams with its abundance of well-coached, Power Five-caliber talent. But to win consistently in the highly competitive SEC of the early 2020s, with the likes of Tennessee, Kentucky, Auburn and an improved Florida, Arkansas will need even more blue chip talent from the high school ranks than it got under Mike Anderson.

It helps Musselman knows the SEC recruiting scene firsthand. He served as an assistant at LSU in 2014-15.

Recruiting is a “huge part of the job,” Musselman told 247Sports.com during his Baton Rouge stint. “Coach [Johnny] Jones and Coach [David] Patrick are such phenomenal recruiters that it’s good to learn from them and see different tactics and ways they deal with not only the student-athletes, but maybe the parents or the AAU coaches. That’s another area where I feel like I’ve continued to grow and learn, and being around this staff can really help me in that aspect as well.”

While Musselman might have learned the ropes at LSU, he hasn’t had to use them at Nevada in the way he would at Arkansas. The Natural State has produced a high level of talent in recent years, including the likes of shooter extraordinaire Moses Moody, and any potential talks between Hunter Yurachek and Musselman would need to address what his recruiting strategy would be.

Of course, Musselman will have plenty of incentive to hire gunner assistants and raise his recruiting game. Currently, he makes $1 million a year in base salary with incentives. It’s been reported that Arkansas is willing to pay north of the $3.5 million per year range for the right candidate. While Musselman won’t command the same sum of Sampson or Beard, it’s imaginable to see him earning in the $2.5 to $3 million range.

His coaching chops, smarts and passion are unquestionable. In those realms, he’d be a perfect fit for Arkansas. But does he want to hit the recruiting trail hard enough? And would he keep hitting that trail hard year after year?

Dig in more to the prime ribeye steak of possibility that is Eric Musselman becoming the next Razorback basketball coach by clicking below. Go to the 19:36 mark to hear the latest on Musselmania from sports radio hosts John Nabors and Tommy Craft: