Search
Home Arkansas Football Razorback News The One Part of Arkansas-UAPB That the Golden Lions Are Guaranteed to... 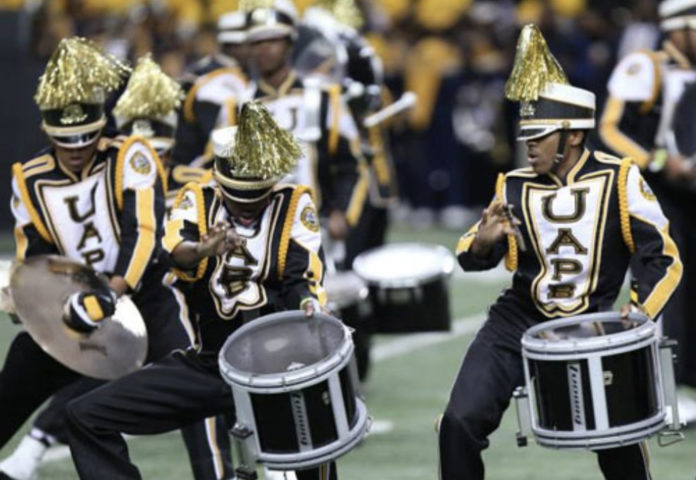 Twenty years ago on an early September Saturday night I sat in the press box at Golden Lion Stadium for the first time.

I was covering the University of Arkansas at Pine Bluff flanked by my new bride, Sheena. As UAPB prepared to play Mississippi Valley State, I noticed the band marching on the sideline as they made their way to the stands. Leading the way was a drum major dressed in leopard print twirling a baton of fire. I did a double take, and I think Sheena had to pick my jaw up off the floor. I hadn’t seen anything yet, though. That was just the pregame march.

That was my ‘Welcome to the SWAC’ moment, and I really loved every minute of the five years I covered the Golden Lions.

That night was just one of the moments that first season that I realized how important bands are to the SWAC experience. I went from working on my story at halftime to waiting to watch ‘The Battle of the Bands’ and at first being annoyed by the performances after the game while I was writing my story on deadline to pausing for a few moments to take it all in.

The talent and preparation needed to pull off those shows is unbelievable. They definitely work as hard as the football players. And while the football in the SWAC is underrated, in some cases the bands steal the show. At some stadiums the fans leave once the halftime show ends, like they were only tolerating a half of bad football so they could enjoy what they really came for.

I loved that the bands would take popular songs of the day and play them. Most bands I had seen performed music from past eras.  Later that September, I was on the sidelines at Southern University and was serenaded by Jaguars band playing Ludacris’ ‘Area Codes.’ If you’ve heard that song, you know why I was smiling.

In my time at the Pine Bluff Commercial I saw every SWAC team play and saw all of their bands perform. Rarely did any of those programs stack up to the pomp and circumstance of the Musical Marching Machine of the Midsouth that proudly wore the black and gold of UAPB.

I had an inkling of how hard they bring it when I was at UAPB’s HPER Building interviewing football players who were returning to campus for fall camp and the band was conducting physicals for its members. I never thought of band as a cardiovascular activity until that time.

And that brings us to Saturday. Most that are attending the Arkansas/UAPB game at Little Rock’s War Memorial Stadium won’t be focused on UAPB’s band. Most will be hoping to see the Hogs stop a three-game losing streak and blow the Golden Lions out heading into to a bye week.

There is no doubt, Sam Pittman’s group could use a ‘get well’ game, and this is the perfect opportunity with the FCS Golden Lions struggling this season at 1-5. Their lone win came against Lane College in the season opener.

But this game is more than just Arkansas notching an easy win. The game holds historical significance as it is the first time the Hogs have faced an in-state football opponent since 1944. And War Memorial Stadium is a perfect setting since it sits only 45 minutes from the UAPB campus. A good number of Golden Lion fans from southeast Arkansas and Little Rock will invade the abandoned War Memorial Golf Course to tailgate along with Razorbacks fans. It will be a fun day.

And I know one of the major highlights will be UAPB’s halftime performance. Arkansas may be up big, and you may have a pull to go back to your tailgate but don’t do it. Take a few minutes and enjoy what I know will be a scintillating performance —  more thrilling than anything the Razorback Band could produce. In fact, if the UAPB band plays at halftime first, you can then leave because you won’t miss much after that.

I can only imagine what kind of show they have prepared knowing 50-plus thousands fans and a national TV audience will be watching. You will thank me later.

The band major may not be twirling fire, but I know if you are seeing this for the first time, like me, you will never forget it.

For more about Arkansas vs UAPB, see this: