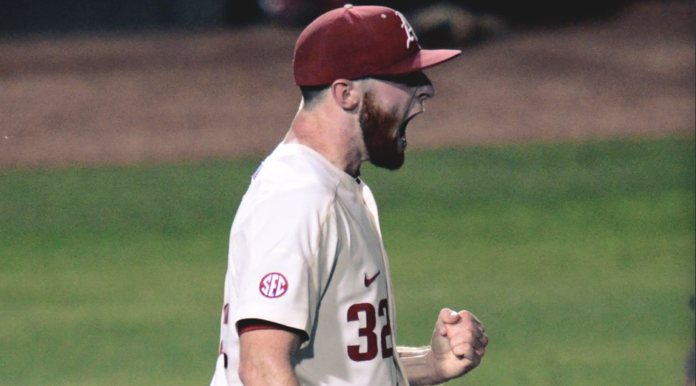 The series opener win was the first time the Hogs had ever played at USC’s historic Dedeaux Field in Los Angeles.

Arkansas (4-0) jumped on Trojan starter Quentin Longrie for five runs, four being earned, on just four hits before forcing USC to go to the bullpen. The top three of Arkansas’ lineup, made of Casey Martin, Heston Kjerstad and Trevor Ezell, went a combined 5-for-14 (.357) at the plate. Kjerstad and Ezell notched two hits each, and Casey Martin cracked a bases-clearing double in the second inning.

“He’s the guy you want up there,” coach Dave Van Horn said of Casey Martin. “He can beat you with his feet and his bat. He can mishit balls and beat them out. He just makes things happen. He’s pretty electric.”

Redshirt junior pitcher Cody Scroggins was also huge. Making his first career start, Scroggins frustrated USC hitters over a career-high 3.2 innings, allowing just one hit and striking out a career-high eight batters. Scroggins struck out at least two batters in each of the first three innings and currently has the highest single-game strikeout total for any Razorback pitcher four games into this season.

Cody Scroggins struck out the side in the first inning, and totaled two more each in the second and third innings. Only two USC batters reached base before the fourth inning and head coach Dave Van Horn went to the bullpen. “I thought he did a great job,” Van Horn said of Scroggins. “He gave us almost four solid innings. He pitched great. He threw his fastball for a strike. He had his changeup going, which he used against the lefties a lot. I’d give him the ball on a Friday night. I liked what I saw.”

Even though USC cut the lead in half after Arkansas went to the bullpen, the Razorbacks were able to quiet down their three-run surge with the trio of Kole Ramage, Zebulon Vermillion and Matt Cronin. They limited the Trojans to only three hits in the final 5.1 innings.

After Patrick Wicklander struggled replacing Cody Scroggins, sophomore Kole Ramage got Arkansas back in the dugout., striking out the first batter he faced on three pitches. By throwing 3.1 scoreless innings, Ramage earned his second win of the year — one more than his total from a year ago.

Matt Cronin, meanwhile, picked up his first save of the year. He threw the final 1.1 innings and striking out the side in the ninth inning.

Arkansas and USC return to the field for game two of the three-game series tonight. First pitch is scheduled for 8 p.m. CT at Dedeaux Field. You can watch it for free online by going to Pac-12 Plus here or to Facebook here. Follow the game’s live stats here.