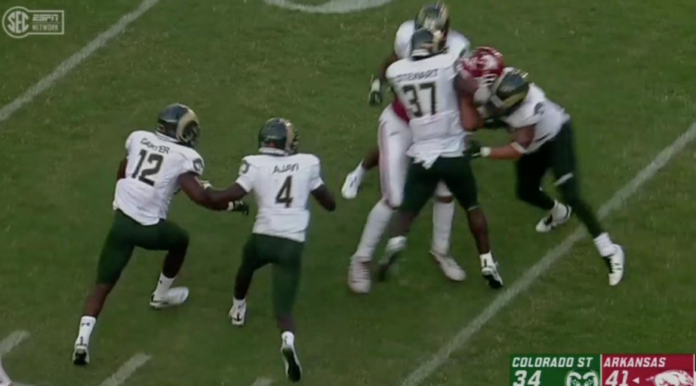 Sometimes, a single play can change a game and even an entire season.

In the fourth quarter of a tight game between Arkansas and Colorado State, Cheyenne “CJ” O’Grady produced such a play. The senior tight end caught a Nick Starkel pass 15 yards downfield at the Colorado State 47-yard line for a first down, then started trucking his way into Razorback lore as at one point five Rams tried to take him down. Those who know how to bet on football online would have wagered, at that moment, O’Grady going down was a as close to a sure thing as you’ll ever see on the gridiron.

Instead, somehow, someway, he beat the odds.

First, O’Grady “started dragging Colorado State linebacker Cam’Ron Carter,” HawgSports’ Trey Biddy wrote. “Then cornerback Rashad Ajayi joined the fight, followed by safety Logan Stewart, then cornerback Marshaun Cameron and linebacker Troy Golden… but nobody could could bring down O’Grady — though nearly half the Rams defense tried — as he shucked them all on the way to a remarkable 62-yard touchdown.”

The touchdown put the Hogs up 48-34, all but sealing the game.

“I think it was a pride thing. I really wanted to get into the end zone,” O’Grady said afterward. “Probably wasn’t the smartest thing to do because we had the lead and they were trying to strip it, but I thought to stay up, and I ended up slipping out. By the time I got to the end zone, I couldn’t breath. I couldn’t celebrate.”

From Yahoo to Bleacher Report, the Herculean run drew raves across the nation. It also landed at No. 2 in ESPN’s SportsCenter Top 10. With the rarity of shucking off the five defenders, the play seems more impressive than the No. 1 choice:

Here, Alabama’s Najee Harris broke one tackle and did his best Rakeem Boyd impersonation in hurdling another defender — an impressive play for sure — but not quite up to the same amazement factor as breaking the grips of five Division I tacklers.

But Alabama games make ESPN a lot more ad revenue and subscription money than Arkansas games, so it’s not surprising they would throw love the Crimson Tide’s way.

Another amazing fact about O’Grady’s run is that it happened when he was was recovering from illness. Indeed, he sat out the first quarter to save energy.

“He’d been sick this week. He’d missed practice earlier in the week, strep throat. I thought that to win it in the fourth quarter, we called him up,” Morris said. “One response at a time, that’s really what it is, so that was great to see, especially after what happened a year ago.” [the 2018 loss to Colorado State]

To see more jaw-dropping moves from Morris and company, check out the following post:

This isn’t the first health setback Cheyenne O’Grady has overcome already this season. A couple weeks before the season opener, he put Hog nation on red alert when he Tweeted that he’d suffered a “minor setback” in the form of a knee sprain requiring surgery. Briefly, it seemed the Razorbacks’ chances of having one of the SEC’s best tight end corps this year was in deep danger.

Fortunately, that arthroscopic surgery for the fifth-year senior went better than expected:

O’Grady did miss the opener against Portland State, but returned in Week 2 against Ole Miss. In seven quarters of action, he’s caught six passes for 119 yards and that touchdown, but expect him to improve in the coming weeks — especially after this potentially season-changing play. If he keeps up what he did in the last eight games of 2018, he’s going to skyrocket up a lot of UA tight end records.

In that stretch last year, Cheyenne O’Grady caught 30 passes for 400 yards and a team-high six touchdowns. As Andrew Hutchinson of Hawgbeat.com notes: “Despite not doing anything the first four games, O’Grady still managed to tie for fifth among SEC tight ends in touchdown receptions and was by far Arkansas’ highest graded offensive player by Pro Football Focus at 78.3. That earned him a spot on the preseason Mackey Award watch list.*”

O’Grady now only needs two more touchdowns to break Jeremy Sprinkle’s program record for a tight end. The two share more than top spots in the record book. They also roomed and trained together in Fayetteville this summer.

In the past, it wasn’t Cheyenne O’Grady’s health holding him back. It was his attitude.

Last spring, when speaking about his then position coach Barry Lunney, Jr., he said “Coach Lunney and I have had a love-hate relationship, but at the end of the day we love each other. We’ve been through a lot of good things and bad things.”

At the start of the 2018 season, O’Grady barely did anything on the field in first four games after a suspension and missing workouts, but former Hog Dre Greenlaw (O’Grady’s teammate at Fayetteville High) lit into him with the bite of a thousand Bulldogs and got him straight for the season’s stretch run.

This year, with the rapid improvement of the offense under new quarterback Nick Starkel, along with the presence of a healthy O’Grady and star freshman receivers, expect the Hogs to win one or two SEC games despite an early setback at Ole Miss. They are improving rapidly enough, especially on offense, to ruin somebody’s season — perhaps a Texas A&M or Auburn — if the defense returns to where it was at the start of the Ole Miss game.

Earlier this fall camp, it looked like Cheyenne O’Grady was losing motivation again. Chad Morris ran him out with the third unit and, to O’Grady’s credit, he manned up to the challenge.

“He’s responded fine,” Morris said in August. “I think that’s been the biggest thing that we’ve seen. We felt like he would, so he responded… He’ll be back, he’ll be ready to go, he’ll be better than ever.”