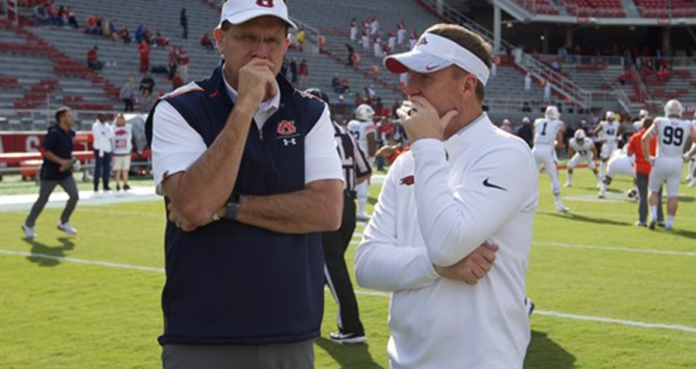 Josh Pate isn’t the next Paul Finebaum quite yet.

But he’s sure putting in the grind to get there. The ambitious sportscaster anchors the sports desk at WLTZ, an NBC affiliate in Georgia and Alabama, and broadcasts his own SEC football show online three times a week.

For the most part, Pate ignores Arkansas, treating it like the unwanted stepchild of the prestigious conference.

This weekend, though, Pate shifted his disrespect into a whole new gear. When discussing the recent hiring of Chad Morris as Auburn’s offensive coordinator, he cast Arkansas in a light that indirectly hurt new Arkansas coach Sam Pittman’s efforts on the recruiting trail.

He prefaced his take by acknowledging it “may rub some people in Fayetteville the wrong way.” Then he proceeded to douse the whole state in Haterade:

“I think you’ll look back and realize this was a promotion” for Chad Morris. “Strange though it may be because he was fired, so technically it’s not.”

“Let’s say your aspirations are to be a big-time head coach. Let’s say you want to be at one of the major programs. Do you have a better shot of getting there as the head coach at Arkansas or as a coordinator at a major program? What’s the answer here? Ask Kirby Smart, ask Lincoln Riley, ask Ryan Day.“

He continued: “You don’t have to slave away at some no-win, dead-end job these days to get yourself a major head coaching job. Chad Morris leaves the University of Arkansas, probably in a position where now he can put himself in a better position to have a head coaching job way down the road.”

Many Hog fans will wonder two things: First, woe to the “major” program who takes that gamble. Secondly, who cares what Josh Pate thinks?

If he was speaking in a vacuum, Pate’s preposterousness wouldn’t matter. But with tens of thousands of followers on social media, and hundreds of thousands of viewers on TV, there’s no question he holds some sway among football fans across the region. And some of those fans will be Razorback recruits, their relatives or folks in their inner circles.

Pate’s take is only the latest evidence that new Hogs coach Sam Pittman has a mountain to climb to restore Arkansas football’s national perception.

Auburn head coach Gus Malzahn, who’s known Chad Morris since 2004 when they met in Springdale, hasn’t yet discussed the exact role Morris will have in Auburn. Chad Morris will likely work with quarterback Bo Nix over the next few years. His son, former Razorback commit Chander Morris, appears more likely to head to Norman, OK than anywhere else.

“I’m fully expecting Chandler Morris — a four-star quarterback — to not come to Auburn,” Auburn writer Brandon Marcello, a former Arkansas sportswriter, said on The Paul Finebaum Show. “know that he had visited here back during the Iron Bowl…I suspect that he is going to consider Oklahoma and Virginia Tech. Just from talking to folks, I wouldn’t be surprised if he ends up landing at OU.”

Expect Chad Morris to develop Nix’s mid-range passing game. “It’’s very obvious they’ve got to add layers to their passing game,” Pate said. “All the folks behind the scenes, in the Southeastern conference, all the defensive guys, they all kind of chuckle with each other. Now some of them end up losing to Auburn, but it’s not because Auburn passed them to death.”

“It’s because some crazy stuff may happen or Auburn out executes them. Whatever the case may be — maybe Auburn is just more talented than them on any given Saturday. But everyone looks at Auburn’s passing game and no one is confused by it.”

Gus Malzahn’s hiring of Chad Morris is a recent example of an emerging trend of “stockpiling” former head coaches on SEC staffs. “There’s a very Nick Saban feel to this,” Pate said.”

“Butch Jones is still to this very day employed by the University of Alabama. Did you know Mike Stoops is employed there? These guys get fired and… they’re all working in Tuscaloosa. Well now Gus Malzahn got himself a former head coach. You just keep stacking them. You just load your coaching staff up with as much experience and as much gravitas as possible. Guys who have seen how an entire operation works make you all the more equipped to carry out your day to day task in [their] one lane of operation.”

This is exactly what Sam Pittman just did in hiring Barry Odom, the former Missouri head coach. The move highly impressed Paul Finebaum, as you can see at the 13:35 mark below. Josh Pate, meanwhile, was predictably quiet about it.