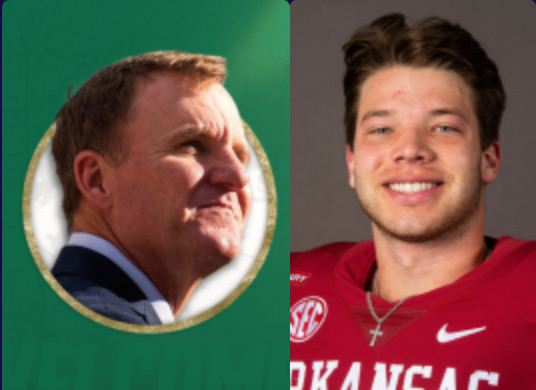 Senior Cade Fortin arrived at Arkansas in January after transferring away from South Florida, where he was the starter going into 2021.

Within months, Fortin rose in most projected Razorback depth charts to third-team after Lucas Coley transferred away and it was announced burner Malik Hornsby would split time at wideout in 2022. And that’s after the Arkansas quarterback room had already thinned out following the ACL injury to another backup signal-caller in Kade Renfro.

Fortin is a name Arkansas football fans should get familiar with, considering he split second-team reps with Hornsby in the spring and could play a big role in the fate of a few games should starter KJ Jefferson go down for any reason.

Arkansas offensive coordinator Kendal Briles likes what he’s seen in the 6-3, 222 pound Georgia native nicknamed “Fortnite” so far. “Fortnite, Cade Fortin, has done a really nice job. He’s a tremendous kid if you get a chance to talk to him. Very, very smart, low-maintenance,” Briles said in May. ” He’s great in the room, the players like him, he’s an experienced guy. He’s played at North Carolina, at South Florida and played meaningful snaps. So, I think we stole one in getting him here, and he’s actually got two years. Great to have him in the room. It’s amazing that he’s here and playing the quarterback position and how smart he is, to be able to make decisions and know what we’re doing. It’s been nice.”

Head coach Sam Pittman added: “I really like his arm strength, he can throw a deep ball, he can throw a short one, but he throws it so the guy can catch it, if that makes sense… I like everything about the kid. He’s really helped us. Imagine right now if we didn’t have him, we’d be in trouble. And part of the reason that we probably don’t have a fourth quarterback is because we got him.”

When it comes to passing, Fortin is prone to contract Ben Hicksitis, the unfortunate condition where college quarterbacks stare down their receivers for too long, sometimes resulting in interceptions.

“One negative regarding his passing game is he tends to stare down targets. More specifically, Fortin stares down one side of the field,” the Fifth Quarter’s Brady Michaels wrote. “Defenses respect his ability to rip the ball on short throws — sometimes choking up the secondary…. When a cornerback is cheating up and a safety is dropping back, that’s when Fortin gets those 20-yard chunk completions. Even when he might be locked to one side of the field, receivers finding the holes in zones become the difference.”

On running plays, however, it’s a different ball game.

First off, he has good acceleration. “When breaking away, he takes between two and a half and three steps per five yards, making him a big strider,” Michaels added. “His hip twitch isn’t just used for maneuvering his body inside the pocket either. It can square Fortin up with a hole instantly and allow him to use his feet to hit the accelerate button.”

But Fortin’s biggest advantage as his runner is his ability to pick out the right holes in the first place: “While lacking adequate speed, he does encompass excellent vision as a ball carrier.”

Cade Fortin, it turns out, doesn’t just as have the ability to read defenses. It looks like also has the ability to see into the future. By leaving South Florida a few months ago for a superior team in Arkansas, he showed he could dodge an onrushing danger more fearsome to the development of a college quarterback than any ‘roided-up linebacker: the arrival of Chad Morris.

No Bull: Chad Morris Is Back

For a good decade and a half, South Florida had been known to Arkansas football and basketball fans as the place where Nolan Richardson’s successor Stan Heath found his footing for seven years after getting fired by the Razorbacks.

Not after Monday’s announcement by Bulls head coach Jeff Scott, who coached with Morris at Clemson from 2011 to 2014: “Chad and I have a great relationship and had a lot of success working together for four seasons under Coach Swinney at Clemson,” Scott said in a release. (The pair was part of four Clemson teams that went a combined 42-11, won the 2011 ACC Championship and had two top-10 offenses.)

Scott continued: “We are very excited to welcome Chad to South Florida and I look forward to him working with Offensive Coordinator Travis Trickett, our returning staff members and me as we employ a fast-paced and exciting offense.”

“Fast-paced” and “exciting.” Hmmm. If that isn’t the kind of talk that gives Arkansas football fans the willies after Morris kept shilling his “Full tilt boogie” talk through two agonizingly inept seasons, nothing will.

And it wasn’t just damage done at Arkansas, either. The last time Morris worked for an old friend, he ended up getting Gus Malzahn fired at Auburn. Of course, that was when Morris was offensive coordinator and trying to play a hands-on role in guiding Bo Nix (result: near-disaster). This time around, however, it looks like Jeff Scott has the right idea.

He hired Morris as an analyst, a non-coaching role that means he can watch games and interact with coaches. But when it comes to the actual players, Morris is supposed to stay the hell away.

Which means *fingers crossed* no college football player will ever again be subjected to anything like this:

There were plenty of lowlights, but here are the worst:

~The last of those losses was the final nail in the coffin. Not only was it an ugly 26-point loss to a C-USA team, but Ty Storey — a quarterback he ran off the year before — accounted for 290 total yards and three touchdowns for the Hilltoppers.

~If you include the two games after Morris was fired, Storey was one of eight different starting quarterbacks used by the Razorbacks over a 24-game span. That includes five different quarterbacks in the final five games of 2019.

~Arkansas didn’t lead for one second in Morris’ final four games, which it lost by a combined 138 points. The Razorbacks actually never led in 13 of his 22 games.

~Morris lost all 14 SEC games he was part of, which is tied for the second-most losses to start a tenure since the conference was founded in 1933. He likely would have broken the record, which is held by Vanderbilt’s George MacIntyre (1979-81), had he not been fired with two games left in the season.

The list could go on and on, but we’ll spare you the gory details. To his credit, before Arkansas, Chad Morris inherited a terrible SMU football team and took it to a bowl game in Year 3. He also recruited well, putting together the 2019 class that would later provide the core of Arkansas’ resurgence under Sam Pittman.

Things didn’t go better for Chad Morris since he packed his bags and left Fayetteville.

Living off his Arkansas football buyout, he landed on his feet as an underpaid offensive coordinator for his good friend Gus Malzahn. As referenced earlier, the Auburn Tigers’ offense sputtered and quarterback Bo Nix regressed under their new play caller, resulting in Malzahn getting fired and Morris once again being out of work.

At that point, he went back to his roots. A legendary high school coach in Texas, he was hired by Allen High School — a premier program in the Lone Star State.

Although the Eagles went 11-3 and reached the Class 6A-DI quarterfinals, it was a pretty bumpy Year 1 for Morris. In his second game, Allen lost to Atascocita 41-20. The loss not only snapped an 84-game regular-season winning streak, but it was also the school’s first in 54 games at Allen Eagle Stadium, its $60 million facility that was built in 2012.

Later in the season, Allen lost to Prosper 28-23 for its first district loss since 2010, snapping a 72-game winning streak. The third and final loss of 2021 came in the playoffs, when the Eagles gave up 34 unanswered points in a 47-21 loss to Southlake Carroll.

More on Chad Morris’ return from an Arkansas sports perspective at the 35:15 mark here: