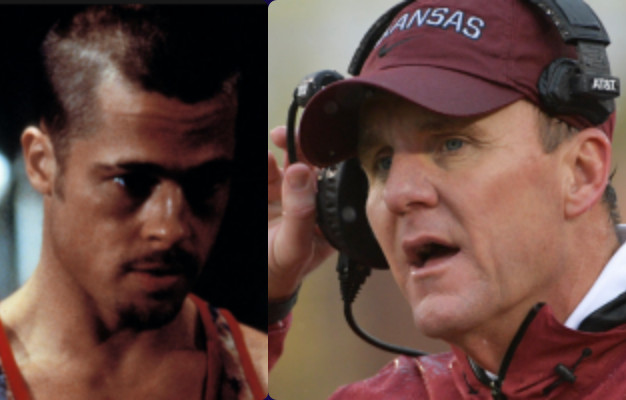 On a long enough timeline, the survival rate for everything falls to zero.

If you haven’t figured things out yet, I’m partial to movie references in columns. That particular line is from Fight Club, a seething takedown of masculinity and consumerism in the face of self-wrought anxiety. The self-wrought anxiety bit fits for Arkansas football. Well, it did during the time of Chad Morris. And, frankly, now that I think about it, the whole focus on masculinity – “iron sharpens iron,” “left lane, hammer down,” whatever “Club Dub” was supposed to be – too.

I know, I know. I suggested here that there would be no more written about him here. But what transpired during Friday’s news dump was worthy of revisiting that proclamation.

Morris resigned from his job at Allen High School in Texas. He spent one year at the preps factory outside Dallas, owning an 11-3 record. HIs team made the quarterfinals of the 6A-D1 state tournament And while that doesn’t sound like a bad season, consider Allen hadn’t lost a home game in the 54 played at their stadium that was constructed in 2012. AHS hadn’t lost a conference game since 2010. Until Prosper beat the Eagles this past season. It was a mess enough of a year that the scuttlebut suggested Morris might have been fired had he not resigned.

In the press release announcing the resignation, it was claimed Morris has “an opportunity to return to college football.”

No doubt the phrase in and of itself is true. As bad as Morris’ last two stops at the sport were before he jumped to the high-school level, college football is a far-reaching field. Notice how the announcement didn’t say FBS college football, for example.

Oh, Morris will almost certainly get a shot at another FBS. It’s hard to imagine it will be a head coaching job, though. He’s 18-40 in five seasons running a program. The man is the owner of the two worst seasons in Arkansas football’s modern history, a stretch of almost 100 years, as much as football played 100 years ago could be considered modern.

The Razorbacks went 2-10 in both seasons, were completely winless in SEC play over 16 games and toward the end faced some of the worst pregame odds that anybody using Arkansas sportsbooks promo codes would want to wager. The four total wins came against Eastern Illinois, Tulsa, Portland State and Colorado State. All of them were at home. Two of them were against FBS opponents. His exit was swift. In fact, he didn’t even make it through the whole second year of a six-year, $21 million contract. Arkansas still had two games left in 2019 when Morris was relieved. Barry Lunney Jr. took over for the final two games.

Despite the detritus he left in his wake, Morris was quickly scooped. His old friend Gus Malzahn hired him in mid-December to be Auburn’s offensive coordinator for the 2020 season. A grand total of 368 days after he was hired, Morris was out of a job On the Plains. Malzahn and his entire staff were let go after a 6-5 season. The Tigers finished 77th in FBS in total offense and 88th in scoring. They weren’t exactly the numbers that harkened back to the dynamite offenses Morris led for Clemson from 2011-2014.

From the Razorbacks’ perspective, the good news about Morris’ lone season as Auburn’s O.C. is that he signed a guaranteed contract there that took off $2.205 million of the roughly $10 million buyout from Arkansas. But the Allen High job “only” paid a little more than $141,000, which doesn’t cut into that nearly $7.8 million of remaining buyout by much. It’s reasonable to think that such a relatively low-paying job does not meet Morris’ duty to seek “comparable employment,” as laid out in the Arkansas football contract he signed.

Arkansas is still on the hook to pay him through the end of 2023, so a much higher-paying job in college would help diminish the total buyout package even more as his monthly payments from the Razorbacks are offset by any other employment compensation Morris receives.

This is what Matt Stepp of Dave Campbell’s Texas Football is alluding to when he writes Morris must “try and seek a job in the college ranks to maximize his income and minimize as much as possible the amount of money Arkansas has to pay in the buyout.”

If Morris is bound again for the mid-majors, it would be his second go around at that level. In 2010, he was the offensive coordinator at Tulsa and then came a three-year, underwhelming stint at Southern Methodist, where he left Dallas with a record of 14-22, a record apparently worth ignoring for an Arkansas program that – it’s believed – was turned down every other big coach which way before landing on Morris (who made more than $2 million a year at SMU). It was a decision that was almost immediately regretted by everyone except those with harsh-red, rose-colored glasses.

None of it made any sense at the time. Nor would it make much sense now if a power-conference team brings Morris back into the fold. For a sport that in just about every other fashion is about what-have-you-done-for-me-lately, Morris continues to get chances.

To be clear, this column isn’t about vitriol for Morris. I have none as, well, I’m not a Razorback thoroughbred. My pal John Nabors most definitely is. If invective if what you seek, he has it in spades:

“Chad Morris still to this day deserves every bit of ridiculing criticism that goes his way, a hundred percent,” Nabors said on his “Locked on Razorbacks” podcast. “And he’ll never not deserve it because what Chad Morris did at Arkansas cannot be forgiven. It would’ve been just one thing, it would’ve been bad enough if he was just a terrible coach.”

But, as Nabors said, it was more than that. Arkansas football was its nadir. Allen football was at its nadir, as improbable as that seems with only three losses in a season. In fairness to Morris, he never claimed a major gig at an FBS was waiting on the other side. A bulk of the speculation from those who hold a grudge is that he was suggesting such a move. That’s the animus talking. The reality is reality, however. Eventually, all Morris’ platitudes and manly catchphrases are going to completely peter out and chances will no longer lie in wait.

I am Jack’s complete lack of surprise.

More from John Nabors on Razorbacks and Chad Morris

Since we’re connoisseurs of Chad Morris antipathy around these parts, let’s dive in a little deeper, shall we?

As Nabors see it, one of the biggest red flags, right out of the gate, was Morris keeping his family in Dallas and going back there on Fridays to watch his son Chandler play high school football. “That right there was a red flag that just bothered me in the beginning,” Nabors says. “Because I’m like, ‘Dude, this is not just a job that you can just kind of like wait on. You and your family got to be all in. This is the SEC. You got to be here.'”

Fast forward past all the other stuff, like the “Hammer Down” ridiculousness, to the end of the his tenure, and Nabors has yet another beef to share. After getting fired, Morris didn’t put out any kind of public statement thanking the Arkansas football program or, most importantly, the fans.

“You may see that as trivial, but I see it as a mark of somebody who’s kind of a coward because, listen, the U of A paid you a lot of money, millions of dollars. They’re going to continue to pay you millions of dollars in a buyout. They gave you everything you needed to succeed. They let you hire the coaches you needed. They paid them the salaries. You had a practice facility, you had a north end zone expansion…”